The Immortal Jellyfish, an ideacity talk about immortality By Mizuki Ogi and Miki Nomura

Shin Kubota is pursuing a dream no human has ever achieved. Kubota has been doing research on tiny Turritopsis dohrnii, a kind of jellyfish, for 37 years in Kyoto University’s Seto Marine Biological Laboratory located in Shirahama City, Wakayama Prefecture.

Kubota is the second person to study the jellyfish, but he has achieved a great accomplishment of its research. Boero was unable to record organism’s rejuvenation abilities more than once because it is a delicate organism and culturing specimens is a long process. No one but Kubota has been able to record their abilities more than once even and has written a thesis that discloses how to do it and why his research is important.

What’s his record for rejuvenating one of his specimens? Nearly 10 times. 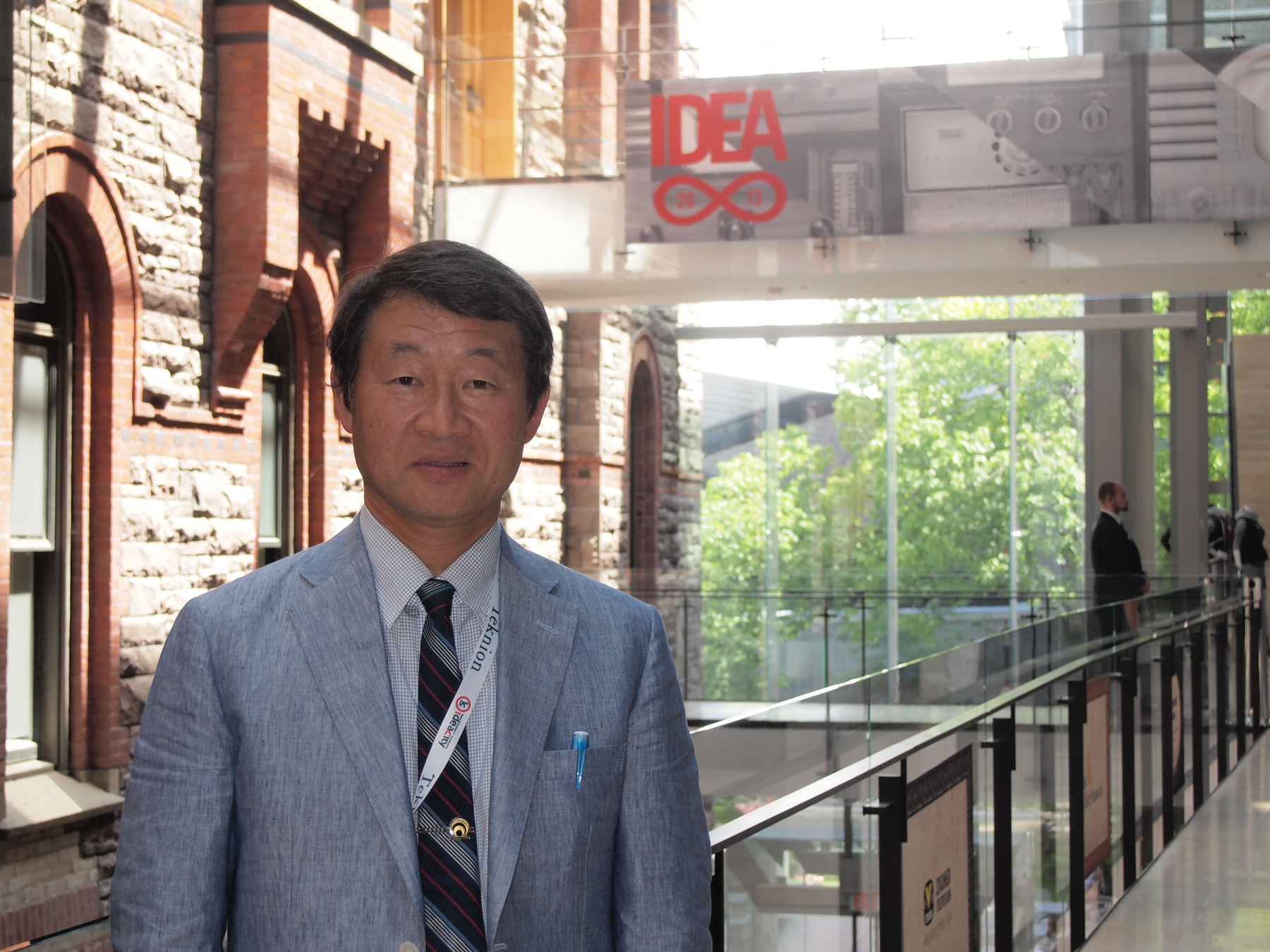 Shin Kubota spoke to a large audience at ideacity in Toronto about life and potential immortality.

Every day, Kubota makes sure that the jellyfish are healthy, that they are swimming vigorously, that their bodies are not clouded, and that they are digesting the feed. When it doesn’t seem they ingest enough food, he needs to feed them. He feeds the jellyfish sliced Artemia cysts – dried brine shrimp eggs that can be barely recognized with naked eyes. He needs to give the eggs to their tiny mouths with two fine-point needles. It is such a hard work. Besides, he has to look after them every single day, hence, when he has an academic conference abroad, he goes traveling with them.

Recently, his jellyfish were accompanied to South Africa, China and England. He tells that the key to his success is his “affection, guts and endurance”.

In 2011, he was struck down by illness, and then his record stopped to 10 times. Even though he was in pain, he stole out of the hospital to go back to his laboratory and continued to bring them up right after his condition was stabilized. His passion toward jellyfish is extraordinary.

His research has reported a number of times in the media in Japan. However, it was last year that his achievement had been well-known all over the world when New York Times Magazine featured him. Then, he was invited as a presenter in ideacity held in Toronto last month.

He started his presentation by telling the audience, “I’m very happy to explain the most miraculous animal on the earth. An immortal jellyfish. This is a superhero!” In the presentation, he explained its biology using  visualized materials to help the audience to understand easily. Turritopsis dohrnii dissolve right after their sexual reproduction and sink to the bottom of the ocean and end up looking like a ‘meatball’. After this the jellyfish miraculously begins to reform.

Aging, stress from environmental changes, or superficial wounds can also be the trigger for the process of the rejuvenation. 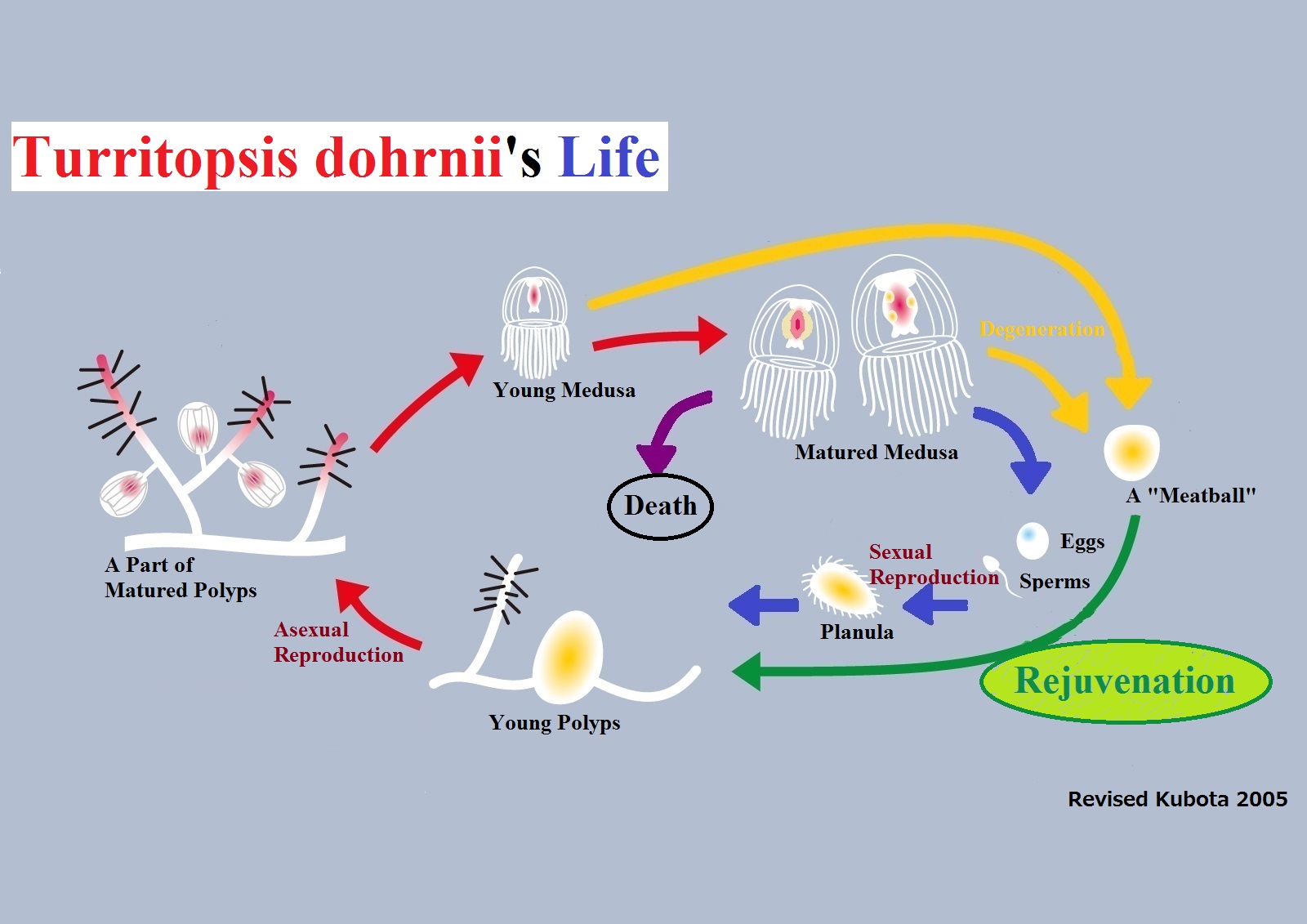 The rejuvination process for the jellyfish is shown here.

As well, when the Turritopsis dohrnii cannot swim anymore – due to the above reasons – they reach the sea bed and the jellyfish absorb tentacles and take the form of a “meatball”. This mass of the former jellyfish then forms roots called stolons that develop polyps. A polyp is one of the two basic forms for Cnidaria, which Turritopsis dohrnii belongs to, and the polyp lives by anchoring at the seabed. Gradually, the buds that are going to be the baby jellyfish are formed at the branches of the polyps, and then these buds begin to float under the water by parting from the polyps and get matured. The adult jellyfish become like a “meatball” again, and the same process is going to be repeated.

This is why the jellyfish is considered to be immortal.

Although Turritopsis dohrnii has great possibilities, the organism has not received wide recognition yet. Kobuta wants everyone all over the world to know about this wonderful aspects of the jellyfish, so he delivers as many lectures as possible throughout the world. He also has a great talent of singing and, in fact, has released several CDs, which simply explain Turritopsis dohrnii’s characteristics.

Every time he gets opportunities to speech in public, he sings his songs. Of course, ideacity was not an exception. At the end of his presentation, he showed ‘Scarlet Medusa Chorus.’ The hall was filled with the applause of the audience. There is no doubt that his enthusiasm for Turritopsis dohrnii has been stamped in their memory.

On the other hand, he laments the behaviour of people today. “Today’s people do not deserve immortality. Human beings cannot live alone. We need to get along with nature and other creatures. However, only the number of human population is consistently increasing. The environment is being destroyed. We all human have to respect for nature and life more,” he said.

Kobuta has devoted his life to the research of Turritopsis dohrnii and chasing his dream of finding eternal life. At the same time, he loves beautiful and precious nature. We hope that his desire not only makes audiences excited about scientific discoveries, but that it also makes them question the world itself and the environment. At the end of the interview, he proudly said, “Mission Possible!”