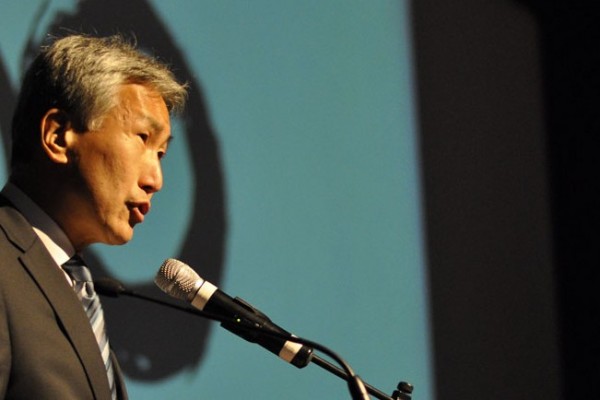 A celebration and dinner of this half-century milestone was held in the evening bringing together the community inside of the centre’s Kobayashi hall.

“Tonight is a celebration of the past,” said President of the JCCC Gary Kawaguchi.

“I’d like to pay homage to the many families and community leaders who came before us as pioneers and agents of change, role models and mentors,” said Kawaguchi. “The issei and nisei proved that success came from hard work, integrity, and that innate characteristic of Japanese of respecting your name and fitting in.”

“The JCCC has lived with change for most of our history,” he said. “We bought this building seventeen years ago and we have not stopped renovating it.”

Part of those renovations includes the new Moriyama Nikkei Heritage Centre that defines itself as the ultimate source of tracking Nikkei history from Japan to Hawaii.

This new archive, made in collaboration with other Nikkei organizations around the world, is located within the building and is one of many additions made to the centre over the past few years.

“Imagine being able to track the settlement history through the two World Wars including the traumatic internment experience to the success the community enjoys today,” said Kawaguchi.

However, this is just one of the many ways the culture centre has been helping to promote the Japanese cultural experience in Canada. Over the many years the centre has existed, it has held various types of events from film nights to evenings with important Japanese Canadian personalities.

All of these events help build a kind of dialogue between the various ethnic groups that exist within Canada as a whole, and for the younger generation of Japanese Canadians many of whom are of mixed race.

“The JCCC’s programs have been instrumental in helping Canadians of Japanese descent explore their heritage through traditional and contemporary cultural activities,” said Consul General of Japan Eiji Yamamoto at the dinner.

“By welcoming everyone regardless of their age, gender, or ethnic background, the JCCC has become a hub for generational and intercultural dialogue encouraging new way of understanding through experience,” said. Yamamoto.

Those who attended the night were also able to receive a copy of the JCCC’s 50th Anniversary Year Book that looks into the many accomplishments the centre has seen since opening its doors.