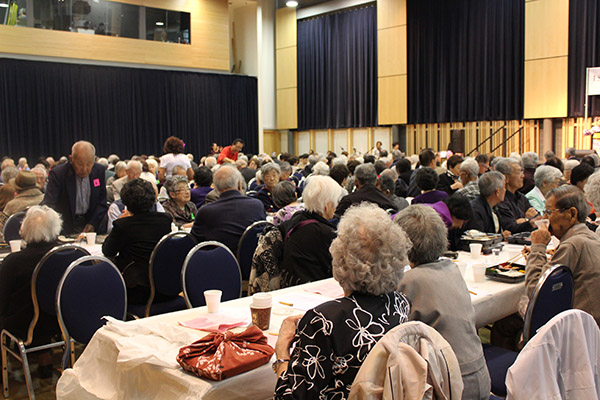 
The JCCC launches two new programs funded by the Japanese Canadian Survivors Health and Wellness Fund grants. The JCCC is a source of community and connection for many seniors. This photo is from an Issei Day celebration at the JCCC in October 2019. Photo credit: Cary Rothbart.

TORONTO — Undeniably, the toll of the pandemic on seniors and their well-being has been heavy; it has been isolating and lonely. The Japanese Canadian Cultural Centre is launching two new programs to foster a sense of connection and community for their senior members.

“In the past two years we have been thinking more about outreach programs because we know the social and mental health of individuals and particularly seniors in our community is suffering the challenges of isolation,” JCCC President Gary Kawaguchi tells Nikkei Voice in an interview.

The two new programs are funded through grants from the Japanese Canadian Survivors Health & Wellness Fund (JCSHWF). Created through efforts from the National Association of Japanese Canadians (NAJC) in the BC Redress Initiative, the fund focuses on Japanese Canadians who were uprooted and displaced during the Second World War, including families who left B.C. and whose children were born out of province between 1942 to 1949.

Grants were awarded to individuals and organizations to enhance programming, activities, and services benefitting the health and well-being of those living seniors. The JCCC successfully applied for two maximum $10,000 grants for the 2022 year.

The first program, “Honour our JC Survivors Day,” is a one-day event celebrating current and past JCCC members that are survivors of the internment era. The event is an opportunity for Japanese Canadian survivors and their families to reconnect with friends and the community. Food, entertainment, and archival photos will be provided to spark memories and conversation. Seniors will break off into groups they identify with based on the internment camps, road camps, sugar beet farms, or postwar social clubs.

“This is an opportunity to re-engage with friends and family who you haven’t had the opportunity to physically meet in the last couple of years, or even longer in some cases,” says Kawaguchi. “You’re going to be rekindling relationships and memories, and I think that’s going to be a powerful thing.”

The second program, the Seniors Outreach Program, targets seniors who, because of health or accessibility challenges, cannot attend events at the JCCC. A volunteer or family member will deliver a bento provided by the centre and help set up remote access to JCCC events, including community zoom calls, so they can participate in the community from home.

Along with a social visit, the volunteer will help the senior make video calls to friends and family and bring resources like films, books, or puzzles from the centre’s library.

“It’s connecting the individual to the centre and to their friends, to make the world a little smaller for them,” says Jan Nobuto, JCCC board and executive committee member. “Even though it is through technology, being able to connect with another person and talk with them helps to stimulate memories and conversations and helps with their mental health as well.”

Even before the pandemic, the JCCC board was concerned that Nisei and Ijusha-Issei populations were reaching an age where it was difficult to come to the centre. They realized some kind of outreach program was needed to ensure they were safe, healthy, and felt connected to the centre, says Nobuto.

In March of 2020, the JCCC closed its doors, along with all other non-essential businesses, not re-opening to the public until November of 2021. In January, the centre briefly closed again following provincial mandates due to the surge in cases from the Omicron variant. The centre re-opened again at the beginning of February.

For many of the JCCC’s senior volunteers, the centre was their source of community and social engagement, says Nobuto. For seniors who volunteered to do archival work, a highlight of the day would be lunch, where the group would catch up and reminisce over homemade treats, says Nobuto.

“I think for some of them, the isolation was more than what they had expected, and that sense of community and connection was gone,” she says. “I try to keep in touch with some of the seniors who were volunteering for different activities at the centre, and they can’t wait to come back. It has been a big hole in their lives that they’ve not been able to be at the centre to talk with their friends and to engage in activities that they felt gave them some purpose.”

During the pandemic, efforts were made to reach members when they could not come into the centre. While the pandemic closed the centre to the public, halting all in-person programming, it did not mean work also stopped. With help from the Canadian Wage Subsidy Program, the centre retained its 15 full-time staff who worked hard to pivot programming online.

Online language classes reached students outside of Canada, the virtual Toronto Japanese Film Festival was available to viewers across Canada, and the Moriyama Nikkei Heritage Centre’s new permanent exhibit, Maru: Immigration Stories, connected the centre to other Nikkei communities across the Americas.

“We wanted to make sure that anybody would feel comfortable, even if they needed assistance, in using the centre. It’s an overall approach to making sure that physically and in policy, everything is as safe as possible,” says Kawaguchi.

The JCCC will be sending letters to members, who are Japanese Canadian survivors, to register for the two new programs in late March and more information will be available in the JCCC newsletter. Depending on the success and funding of the projects, the centre hopes to expand the scope of these projects across the country.

“If this outreach works, then there’s the opportunity to engage the broadest possible community and get as many groups across the country [to participate]. I think that we could even do virtual internment camp reunions, that’s where this has the potential to go,” says Kawaguchi.