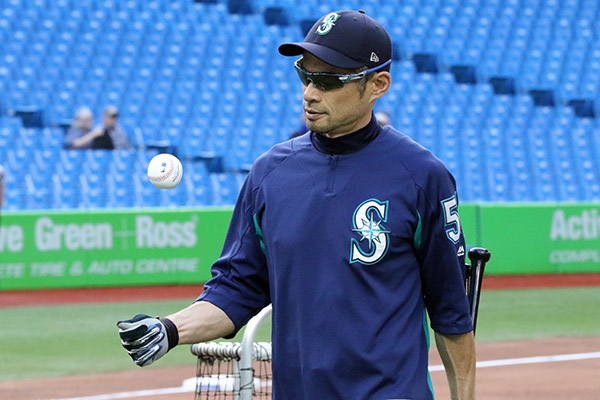 Canadians get what might be their last look at Ichiro Suzuki during batting practice before a game between the Toronto Blue Jays and Seattle Mariners in Toronto on May 9. Photo credit: Jonathan Eto.

TORONTO — Despite the Miami Marlins declining the $2 million club option on Ichiro’s contract last November, this year has been abuzz for Japanese baseball star Ichiro Suzuki.

A new species of wasp was named in honour of Ichiro. Diolcogaster ichiroi was discovered and named by Canadian entomologist (a scientist who studies insects) and Ichiro-fan, Dr. Jose L. Fernandez-Triana. In a recent study published in ZooKeys, a scientific journal, Dr. Fernandez-Triana, who works for the Canadian National Collection of Insects in Ottawa, wrote: “This unique and remarkable species is named to honour the truly unique and remarkable Ichiro Suzuki, my favorite baseball player and one the best ever to play the game.” 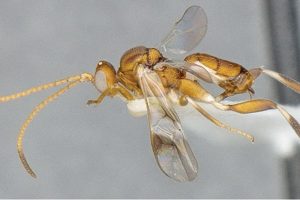 At the time the research for this paper was being conducted, Ichiro was still playing for Florida, where Diolcogaster ichiroi is native, explained Dr. Fernandez-Triana.

“Unfortunately, the new owners of the Miami Marlins did not keep Ichiro, an unpopular decision with many Marlins fans. Hopefully soon another Major League team gives the “Universal Hit King” the chance to continue his extraordinary career in baseball,” he wrote.

Perhaps his article helped stimulate some buzz for Ichiro, as there were few teams that showed interest in the veteran player. Ichiro has clearly stated in the past that he wants to play baseball until he is “at least 50,” and fans were starting to worry as spring training was just around the corner that he would not be able to achieve that goal. Finally the Seattle Mariners, the team that first brought the star over from Japan, signed Ichiro to a one year contract.

Opening day in Seattle, fans roared with a standing ovation to welcome back Ichiro as he ran down the red carpet during pre-game introductions. Having last played in a Mariners jersey July 22, 2012, Ichiro got the nod to start in left field and went on to become the 20th outfielder to make the MLB all-time 5000+ career putouts in the 2-1 loss. Early in the season, Ichiro had flashes of his old self with a homerun saving catch in his second game and reaching base four times in another.

But as some of the Mariners’ injured players returned to regular duties, Ichiro faced criticism as his batting average dropped to .205. Ultimately on May 3, the Mariners announced that for the rest of the season, Ichiro would move to the front office as a special assistant to the chairman. Yet Suzuki has not announced his retirement and continues his everyday routines, including batting practice. He dresses in full uniform to welcome players to the bench, only to leave before the game starts, as MLB rules limit the number of players in the dugout during the game. 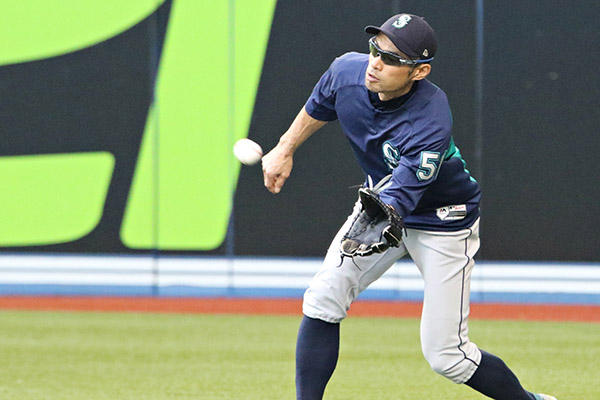 Ichiro will not play another league game this season, but you wouldn’t be able to tell. In what may be his final trip to Toronto, May 8 to 10, Ichiro’s batting practice was a last glimpse of Ichiro in action for many Canadians. Known as a prolific slap-hitter, getting on base any way possible, Ichiro’s technique and mechanics are perfect, and with perfect contact, his hits still leave the ballpark, often to the second deck in right field at the Rogers Centre. Already this season, Ichiro’s special assistant duties have varied and he has stepped in as Seattle’s interim bench coach for a doubleheader in Detroit, where they split decisions on May 12.

So what’s left for the 44 year old wizard? It’s unsure if we’ll see him playing in North America next year, but there’s a strong likelihood that fans will see him play once again as the Mariner take on the Oakland Athletics to open their 2019 season with a two-game series on March 20 to 21 at the Tokyo Dome. What’s known for sure is that we’ll see him enshrined in the Baseball Hall of Fame when he finally decides to hang up the cleats.

Until then, let’s hope Canadians get chance to see Ichiro play again.