“The Little House” Review: Reading between the lines 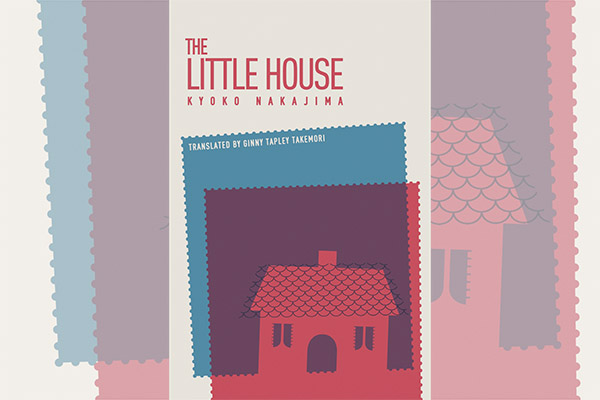 The cover of Japanese author Kyoko Nakajima’s prize-winning book, The Little House, which has been translated to English.

In the story, a small red house in the idyllic countryside watches curiously as urban sprawl spreads in the distance, until the house is engulfed in skyscrapers and mansions. Looking scrappy and forgotten, the little house accepts that it will soon be demolished.

The story inspired and is intertwined into Japanese author Kyoko Nakajima‘s novel of the same title, Chiisai O’uchi, which takes place in a European-style house with a red gable roof in the suburbs of Tokyo. Set between the economic boom of the 1930s to the end of the Second World War, the occupants of the little house watch as the Pacific War encroaches and makes their lives smaller and contained to the house.

Published in 2010, The Little House won the prestigious Naoki Prize, for popular literature by a rising author that year. The novel was translated to English by Ginny Tapley Takemori and was released in Canada by Darf Publishers in November.

The story is told by Taki, who arrives as a teenager to the house, to work as a maid for the Hirai family: Master Hirai, his young bride, Tokiko and her son from her first marriage, Kyoshi. Taki’s friendship with Tokiko over the next 15 years becomes the most significant relationship in Taki’s life. Now an old woman, Taki writes her memories in a journal. As the family’s maid, she uncovers and protects the Hirai’s secrets.

“What I have learned from doing this kind of work over many years is that if there are a hundred families, there will be a hundred different types of couples. Anyone such as a maid, who enters the inner circles of a family through their work, should not go spreading gossip about the family situation for their own amusement,” says Taki.

Not until the very end of the book do we learn that there are secrets Taki hides even from the reader. 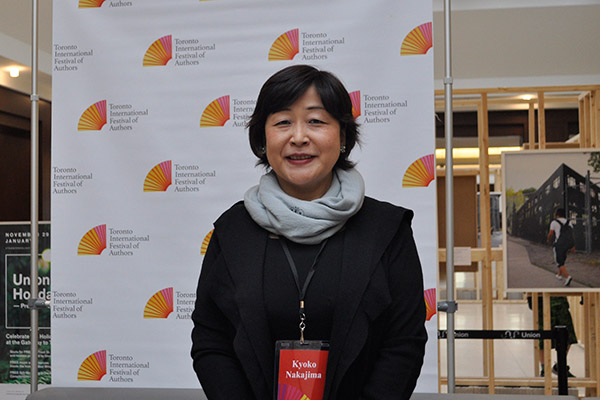 Author Kyoko Nakajima at the ‘Authors on Tour’ event with the Toronto International Festival of Authors in Union Station on Oct. 27. Photo credit: Kelly Fleck.

The story is filled with domestic details that become more significant as the war worsens and rations become tighter and Taki tries to preserve normalcy in the home. Details like the bento lunches Taki packs for Kyoshi on Patriotic Services Day, (beginning in 1939, the population was supposed to honour the soldiers by abstaining from luxuries). Children were expected to bring a plain lunch of white rice with umeboshi plum in the centre to resemble a Japanese flag.

Nakajima discovered in reading children’s journals, that mothers and maids would go around these rules by lining the bottom of the bento with a thin layer of rice, adding finely chopped dried bonito with soy sauce, or tiny shrimp simmered in soy sauce and mirin, covered with sheet of crisped nori and concealed beneath another layer of rice with the requisite plum on top. A rare glimpse into everyday life, Nakajima’s extensive research to write this book included consulting woman’s magazines and children’s journals to create an authentic portrait of the times.

While this story is set during the war, it is not a war story, but instead a story of average people whose lives were interrupted by the war.

“As the war worsened, the everyday life of the people, that’s what I wanted to write about,” Nakajima told Nikkei Voice in an interview. “So I thought that taking one woman, just an average woman, and making her the voice.”

Taki’s recollections are intercut with interruptions from the present, in the form of her college-age nephew, Takeshi, commenting and questioning the validity of her story. Through Takeshi, the reader is reminded that other things happened during war and this is only just person’s perspective.

A subtle and delicate story, it focuses on how generations understand and talk to each other and laments that questions aren’t asked until it is too late and things are left unsaid. The final chapter, told by a different narrator, cuts through Taki’s story, distorted by her love and loyalty to Tokiko and tries to uncover the things she never said.

A final secret revealed on the second last page, makes you want to flip the book right back to the beginning and look for clues between the lines.

The Little House (Darf Publishers) by Kyoko Nakajima is available at most major bookstores for $25.50.

Thank you to Darf Publishers for a review copy of The Little House.

Click below to watch a clip from the Japanese film adaptation of Kyoko Nakajima’s The Little House, starring Haru Kuroki as Taki and Takako Matsu as Tokiko Hirai. Directed by Yoji Yamada (2017).