Many Japanese athletes tend to get into the news like Munenori Kawasaki of the Toronto Blue Jays, Yu Darvish of Texas Rangers and so on. But now, lets focus on the young Japanese genius, Sho Okawa.

These universities were all trying to get him in with full scholarships. In addition, he would be granted research jobs paid by two of the universities mentioned. Eventually, he decided to enroll at The University of British Columbia because of its superb faculties and because it’s regarded as the best university in the health science field he wants to specialize in.

His family moved from Japan to Canada when he was just five years old. At the beginning of the life in Canada, he couldn’t speak English and was studying English in the lowest ESL class at his elementary school.

Accordingly, his mother had an attempt to get his English better by a unique and innovative method. She asked elementary students to take care of him when his parents were out. His baby sitters, kids themselves read books to him and talked with him as friends but also as teachers.

His English was gradually improved, producing an outstanding result at school. His teacher told him that he must be a gifted child and recommended him to be it, and then he was recognized as it by taking tests for several times when he was just nine years old.

After graduating from his elementary school, he entered Thomas Haney Secondary School, which adopted a unique system that advances their best subject to next step without following schedules at the age of 12 by skipping grades.

“I think there are many kids like me in Japan.” He says. “But just we don’t have education for gifted child and grade-skipping system, so they can`t come out to surface. If we have those kinds of education system as Canada has, Japan will get more energetic.” Finally, he graduated from the school ahead of schedules in June this year with a 99 per cent grade average at the age of 14.

“In the future, I want to be related to find solutions of many disease like cancer, diabetes, Alzheimer`s disease and more, which is hard to be cured.” He says with expectation.

Even though he is obviously genius, he shows he isn’t necessarily all that different from the other kids, “I am struggling to find a partner at the prom. I am not good at something like that.” He said shyly before graduation of the secondary school. 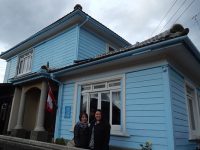 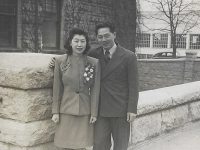