There’s nothing funny about the latest recreational drug hitting Japan 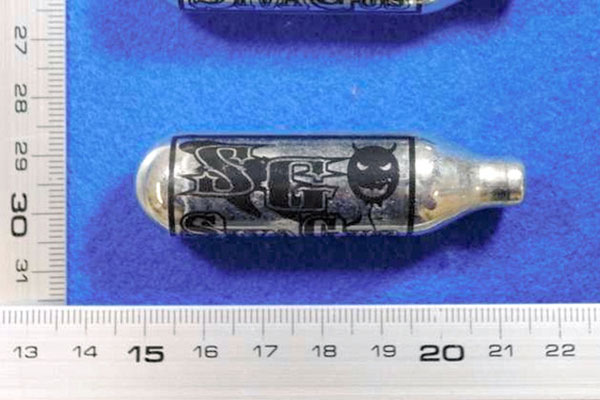 A canister of Sivagus, which is sold online to refill bike tires. Photo courtesy: Japanese Ministry of Labor, Health and Welfare

JAPAN－In late September, the Japanese Ministry of Labor, Health and Welfare launched a new set of regulations on “SIVAGUS”, a gas, which is also known as Nitrous oxide, that’s now being used as a recreational drug.

Known widely as “laughing gas”, N2O is being sold online, according to retail websites, for the purpose of pumping up bicycle tires, but some are using the inhalable anesthesia as a recreational drug.

The gas has several legitimate uses such as a general anesthesia for operations and dental treatment, and as a food additive to make whipped cream lather. However, when you inhale the gas in large quantities it can make people feel euphoric and relaxed. This happy feeling has led to its nickname as “laughing gas”.

There are many risks when inhaling nitrous oxide including losing your motor controls and sometimes leading to a lack of oxygen to the brain. Japanese officials have been tightening restrictions on quasi-legal drugs and are asking online retailers to take the product down from their website.

In Japan, retailers need to have permission from their prefectural governor to sell N2O. The Japanese Ministry of Labor, Health and Welfare notified prefectures to tighten regulations on dealers that sell Nitrous oxide without authorization.