This year’s deep freeze was bad for Ontario’s Sakura trees, but cold weather can be healthy 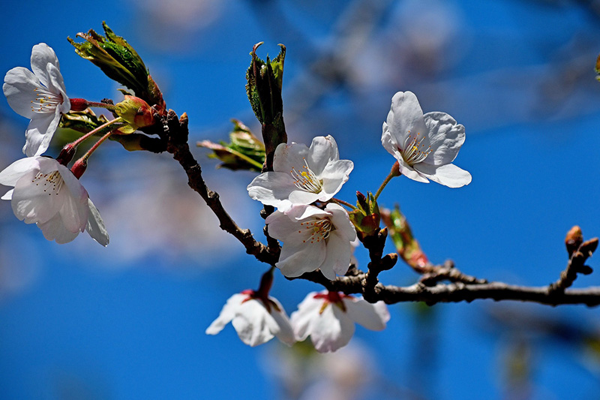 This was a winter so cold the cherry trees bloomed late.

While that may sounds like the punch line to a joke, for many Canadians this past winter was one of the most frigid on record.

But as May arrived so too did the warm weather, but none of Ontario’s thousands of Sakura trees blossomed as they were scheduled to.

Only late in the month did the signature pink, sweet-smelling blooms appear, but this cold winter, if repeated, could be bad for the cherry trees’ health according to landscape architect Scott Fujita.

“Weather wise, this winter was bad for the cherry trees, but they do need cold weather just not this cold,” Fujita tells Nikkei Voice.

“Maybe minus 10 would be fine, but minus 20 is very bad especially for any newly planted trees,” he says on the ideal conditions.

He also notes that with the colder weather, small animals like rabbits will often nibble at the bottom of the young trees that are very sweet.

Fujita played a part in The Sakura Project that planted over 3,000 cherry trees in public spaces around Ontario.

The results of the project can be seen in places like Centennial Park and the University of Toronto campuses where Ontarians can take part in their very own Hanami, or cherry tree viewing picnics.

For Canadians, the late bloom of the trees was tangible evidence that this was a bad winter, but many were elated to see them finally bloom late in the month.

In Japan, the Sakura tree is not only a symbol of spring, but it’s also frequently used in reference to new beginnings for graduating university students.

“The new semester begins in April and that’s also a time for graduation,” Fujita tells us.

He reasons it’s a matter of having a new start to life that makes the trees important to Japanese, but for Canadians the bloom is a signal that good weather is on the way.

According to a study in Proceedings of the National Academy of Sciences, 2015 could also be a record-breaking year for warm temperatures with El Niño – a warm air current that moves over the Pacific – resurging.

Next winter could be much different from this year’s and perhaps we’ll see the cherry trees bloom on time.

The official blooming date of the Sakura trees this year was on May 14, 2014 almost a month late.