Three writers on the future of Japanese literature 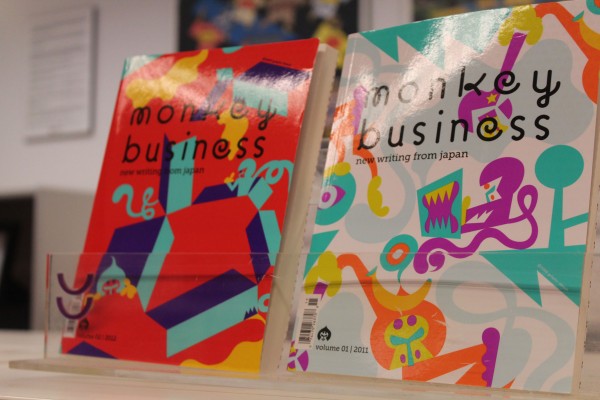 Monkey Business is the only English literary journal that publishes contemporary Japanese Literature. The publication is edited by professor Ted Goossen who specialize in Modern and Contemporary Japanese Literature at the York University and by professor Motoyuki Shibata who teaches American literature and literary translation at the University of Tokyo.

At the event, three young writers―Masatsugu Ono, a novelist shortlisted three times for the Akutagawa Prize, Yoko Hayasuke who made her debut in the Japanese version of Monkey Business, and Roland Kelts who is the author of the best-selling Japanamerica ― visited the Japanese Canadian Cultural Centre to discuss what is going on in the Japanese literature and language today.
Kelts described how different Japanese and American animations are, referring to “New Treasure Island”  drawn by Osamu Tezuka, one of the old masters of Manga.

“There are a lot of young Japanese manga artist in Japan. In Japan, not many people had resources to produce kind of high-end animation at that time. Such as Walt Disney and Max Fleischer. A limited animation technique has been developed  in Japan.

Using Japanese limited animation approach effectively makes animated story, spending out of money to do so.  Animators can take the same character illustration. Animation is simply repeated the different perspective and different locations to affectively create a sense of movement. Trick the viewers.

(He switched a slide on a screen.) 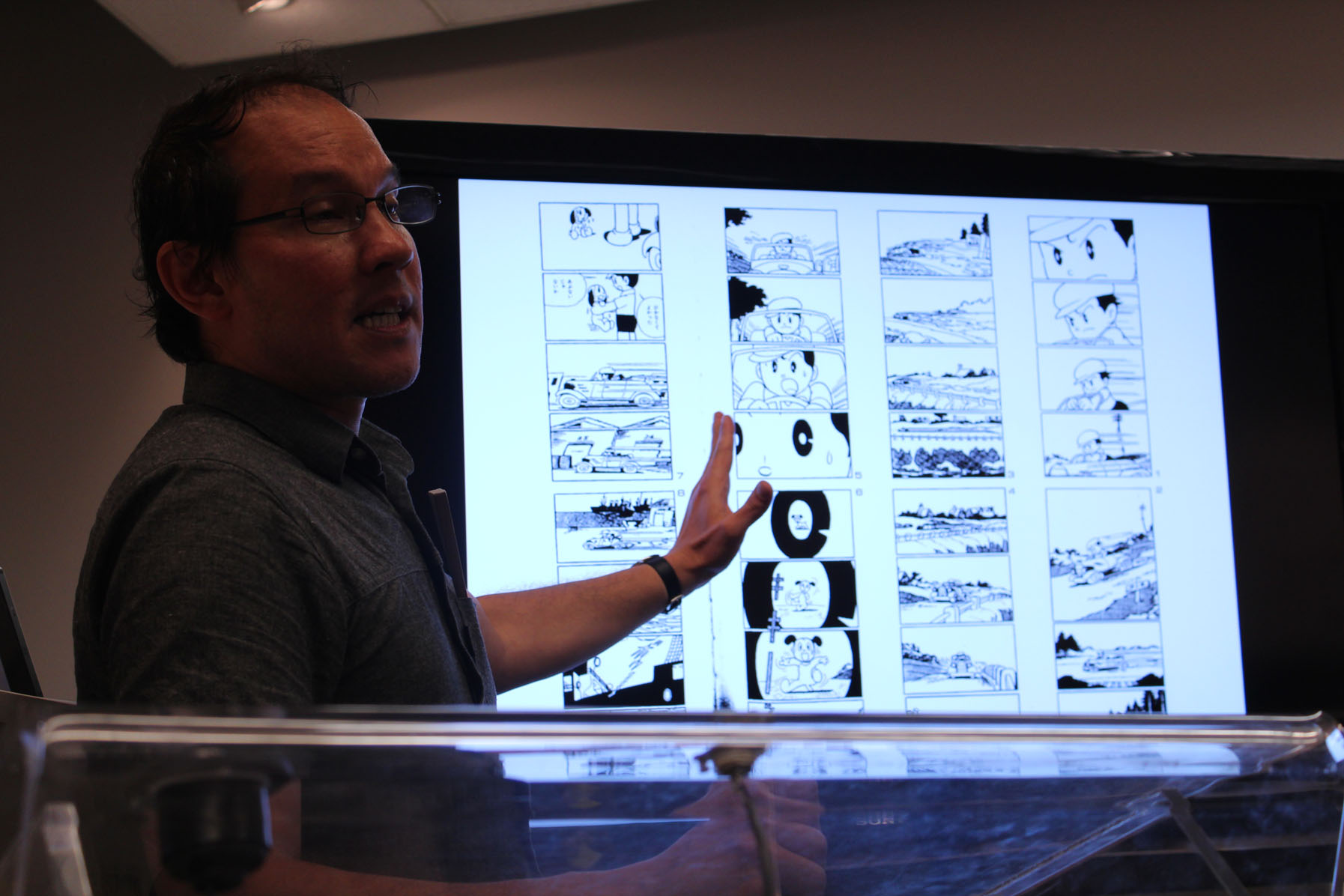 This is “Treasure island” worked by Osamu Tezuka. See here. The character’s face really doesn’t change very much at all. It was not drawn several illustrations to show this movement. What is changing is your perspective on a face. And through the change of perspective, you get a sense of action and movement. Moving camera rather than characters moving. That’s very different from comics coming into Japan from America, for example Superman, Super Heros comics. There are a lot of actions in them.”

During the talk, Ono and Hayasuke read their own works aloud. In the Ono’s story, there are two main characters who are going back to their town in which they are used to live, but the town is completely changed.  Hayasuke’s story looked into the nuclear crisis caused by tsunami recently in Japan. What do we need after an an accident at a nuclear power plant happened? Is it supposed to be “Doraemon” who make our dream comes true? Interestingly, Hayasuke never studied how to write novels at a school. Through reading books at a library at the University of Tokyo, she learned processing writing through reading books. 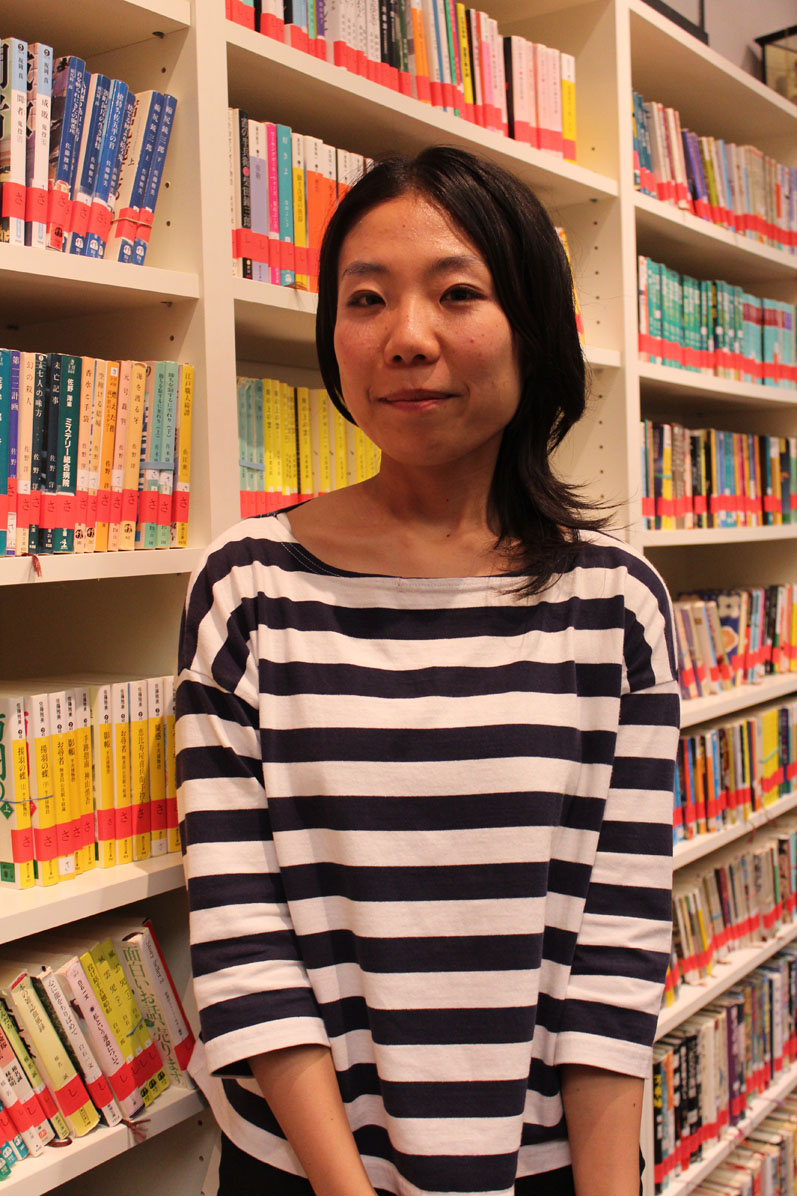 During the presentation, some audience members raised concerns over manga stating that it can be a bad influence on young people.

“I couldn’t read manga in my childhood because my parents never allow me to read manga,” one audience member said. “An idea, philosophy, and culture of young people who are into manga is … not completely… quite different from that of people in my generation at this moment.”

“In a reversible manner, manga is good to introduce people to the literature world,” said York University professor Ted Goossen at the event.

“For example, nobody read the original text of the Tale of Genji first. But people read manga of the Genji and if they like it, they will read the original one. Some of my students were interested in Japan by the end of class,” he said.

Ono added to this saying that much is the same in Japan as it is here.

“I talk with young student at my university everyday,” said Ono. “The students who read manga read books as well. What is very scary is that some students who don’t read manga will read nothing,” he said anxiously.

At the midway point of the presentation, the topic moved onto how writers aspire to keep the Japanese language beautiful in their texts.

As French writer, Marcel Proust, said, “All beautiful books are written in foreign language.” And here’s something else from Proust. “The best way to preserve French language is to attack it.” This sentiment applies to the Japanese language as well.

“Language in books is a sort of far from that known as what you say in our daily life,” said Ono. 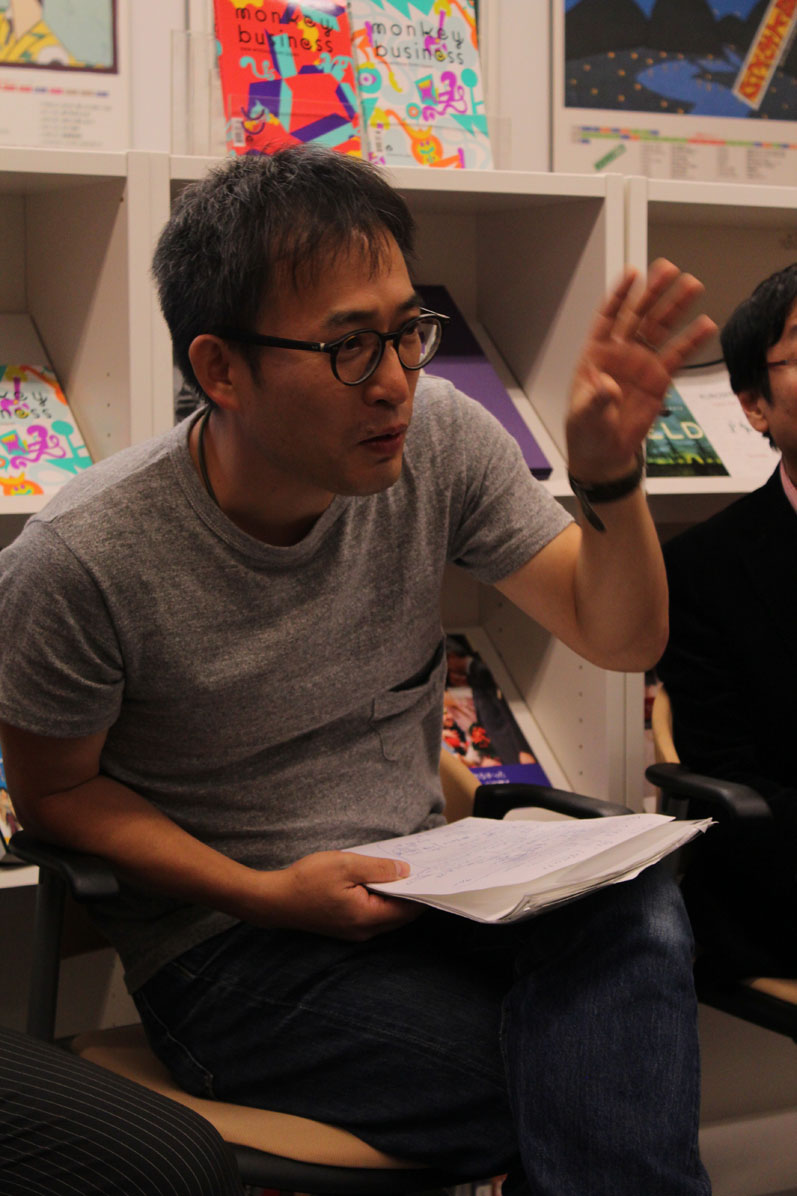 “That kind of literary language may not beautiful for readers who are in the same period of the literary. A language determines our mind and perception. To break or attack language is to make it expands its possibilities. If someone feels wired to current language such as manga, it may be shaped and refined,” Ono concluded.

The talk was lively and the audience was talkative. The authors’ message to them, we shouldn’t stop reading and read all different kinds of literature.
You can purchase Monkey Business paperbacks or e-books the following URL.
:  http://monkeybusinessmag.tumblr.com/store
If you want to know their activity, please visit their Facebook page: https://www.facebook.com/pages/Monkey-Business-New-Voices-from-Japan/204751509564419