TIFF brings another strong slate of Japanese films in 2016 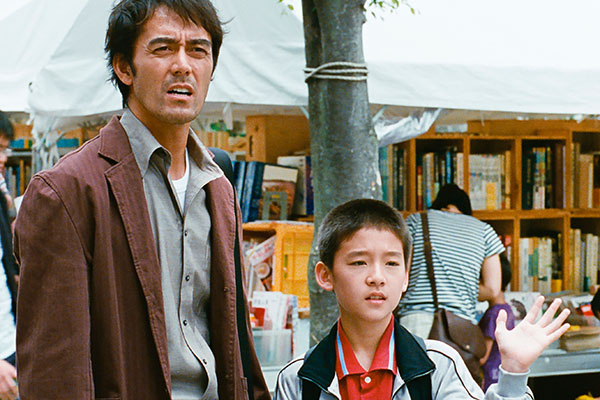 Toronto has become a paradise for Japanese film lovers. Festivals like the Reel Asian International Film Festival, the Toronto Japanese Film Festival and Toronto After Dark Film Festival bring in an exciting mix of new and diverse Japanese cinematic offerings. But the jewel in this particular crown is the lineup at the Toronto International Film Festival (TIFF). As one of the film world’s most respected and prestigious events, TIFF’s stature allows its organizers to attract the biggest and most anticipated films from Japan’s top film makers. The 2016 edition of TIFF boasted the much anticipated new work of Hirokazu Kore-eda, Koji Fukada, Miwa Nishikawa and Sang-il Lee. Festival-favourites Studio Ghibli returned with The Red Turtle by Dutch animator Michael Dudok De Wit and director Kiyoshi Kurosawa presented his new French film Daguerreotype.

The Japanese film industry has been criticized lately for falling behind its Asian neighbours, particularly Korea and China, for the quality of its work. Many blame the Japanese production committee system for creating products that are too cautious and obsessively focused on containing commercial risk. Thankfully, these complaints are not prevalent in this year’s TIFF line-up. Here is a look at some of Japan’s best offerings at TIFF this year. 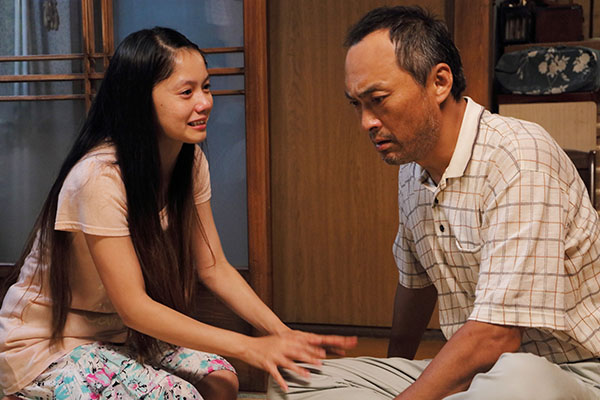 Director Sang-il Lee brings oscar-nominated actor Ken Watanabe and Aoi Miyazaki together with an all-star ensemble cast in Rage, a drama that will leave you shaken, and questioning who deserves your trust. Photo courtesy: Toronto International Film Festival.

With Rage, director Sang-il Lee reunites with international Oscar-nominated Ken Watanabe after their criminally under-appreciated remake to Clint Eastwood’s Unforgiven in 2013. Lee also reconnects with the Akutagawa Prize winning novelist Shuichi Yoshida whose novel Villain was the basis for the director’s Japanese Academy Award winning 2010 film, under the same name. Rage is a riveting improvisation on the burden of trust, as well as the rage – an emotion often buried deep within – which is triggered when that trust is betrayed. The film is extraordinary; audiences can expect to be shaken by its intensity and will find themselves revisiting key scenes for days afterward.

The film starts in the Hachoji suburb of Tokyo where a grisly murder takes place; scrawled in viscera on a crime scene wall, the word “ikari” (rage). A year passes with the perpetrator still at large and little progress made in the investigation. The director moves away from the police procedural and narrows his focus to three seemingly unrelated stories in which enigmatic strangers enter the lives of characters already steeped in anxiety about a killer possibly walking free among them.

In Chiba, Yohei (Ken Watanabe) worries about his troubled daughter, Aiko (Aoi Miyazaki). He rescued her half-dead, from a Kabukicho sex club and she has now started seeing Tashiro (Kenichi Matsuyama), a gloomy dockworker who shares little about his past. Tashiro bears an eerie resemblance to the blurred security camera image of the killer. At a gay club in Tokyo, Yuma (Satoshi Tsumabuki) hooks up with Naoto (Go Ayano), a recent arrival to the city. Yuma is taken with Naoto’s wounded passivity and two soon enter into a tender domestic arrangement. But Naoto remains evasive about where he comes from or what he does while Yuma is at work. Yuma then notices a pattern of moles on Naoto’s cheek similar to those of the killer. Meanwhile in Okinawa, teenagers Izumi (Suzu Hirose) and Tatsuya (Takara Sakumoto) come upon a charming but unstable drifter Tanaka (Mirai Moriyama), squatting in the ruins of a seaside bungalow. When Izumi is raped by an American soldier, Tatsuya is devastated for failing to protect her. He turns to Tanaka for support, but uncovers a terrible truth.

The all-star cast is uniformly excellent, with Aoi Miyazaki and Go Ayano delivering career-topping performances. Lee’s script keeps us consistently off-balance, our suspicions and allegiances in constant flux. He confidently weaves the three stories into a tightly-paced, seamless narrative that builds to – with the help of Ryuichi Sakamoto’s soaring score – an emotionally devastating crescendo. The conclusion left the audience of 1400 at the world premiere in teary exhaustion, including star Ken Watanabe, who was clearly overwhelmed as he took the stage for the post-film question period.

One remarkable moment in the film comes in the closing seconds when Aiko turns and wordlessly locks eyes directly with the audience in a gesture that challenges us to judge her. We are all complicit here. We have spent the last two hours withdrawing our trust from the good while carelessly bestowing it on the undeserving. Who are we to judge? This is virtuoso filmmaking and one the most compelling Japanese films of the decade.

After the Storm, Hirokazu Kore-eda

The festival has had a long love affair with Hirokazu Kore-eda (Nobody Knows, After Life). He has premiered all of his films at TIFF and accompanied all of those films to Toronto with only one exception. And what is not to love? He is arguably one of the best and most consistent filmmakers in Japan today.

For his new film After the Storm, he assembles a cast of some of his most reliable actors from his previous films, Hiroshi Abe (Still Walking), Yoko Maki (Like Father, Like Son) and Kirin Kiki (Our Little Sister) for another understated assessment of Japanese family dynamics.

Ryota (Abe) is in trouble. Once prize-winning author, he finds himself abandoned by his muse and it has now been 15 years since his last novel. He manages to eke out a living as a small time detective, a job that he deludes himself into believing is research for his next book. His father has just died and he struggles with a destructive gambling addiction, while his mother and ex-wife are moving on with their lives. Renewing contact with his estranged family, Ryota struggles to take back control of his existence and find a lasting place in the life of his young son. One night a typhoon strikes. The fractured family is forced to spend the night together at Ryota’s mother’s tiny danchi apartment, offering up the stage for melodramatic reconciliation or the final dissolution of the family. This being Kore-eda we know it will be neither but something with much greater subtly but no less power.

After the Storm feels like a lighter companion piece to his 2008 masterpiece Still Walking, lacking the immediacy of Like Father, Like Son but more engaging for non-Japanese audiences, than the emotionally-muted Our Little Sister. Abe brings a seedy, careworn charisma to the central role, all at once charming, selfish and self-destructive. Behind Ryota’s bluff and bonhomie there is the regret of a man stranded between what he should have done and who he could have been. When a desperate client asks, “how did my life turn out like this?’ Abe’s eyes issue a barely perceptible flinch of self-recognition. It is one of many nice moments in a subtle and nuanced performance. Despite the serious themes, this is Kore-eda’s most humourous film to date and there is great comic interplay between Ryota, his deviously flighty mother (Kiki) and his perpetually exasperated elder sister (the always excellent Satomi Kobayashi).

This is a very personal piece for Kore-eda, he said, “The film incorporates the changes that occurred within me after my mother and father died, it’s the film that is most coloured by what I am. After I die, if I’m taken in front of God or the Judge of the Afterlife and asked: ‘What did you do down on earth?’ I think I would first show them After the Storm.” 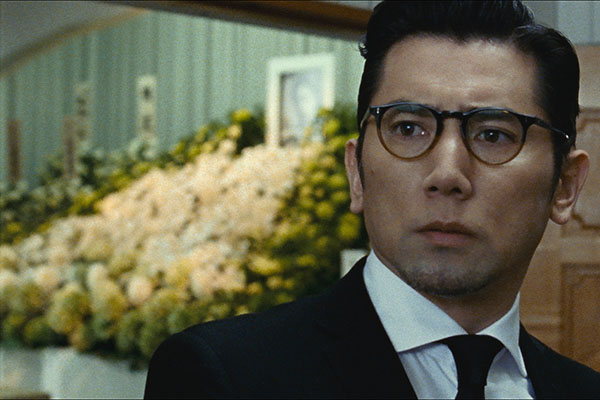 The wages of regret and redemption are measured in Miwa Nishikawa’s (Love for Sale, Dear Doctor) new film The Long Excuse. Natsuko (Eri Fukatsu) and her friend Yuki depart for a ski trip in the Japanese Alps leaving her husband, celebrity author Sachio (Masahiro Motoki) at home. Not long after they are gone Sachio’s young lover Chihiro arrives. The next morning there is a phone call; there has been an accident, the bus has plunged into a frozen lake. Natsuko and Yuki are dead.

Sachio dutifully attends the funeral, publicly performing the role of bereaved spouse but is unable feel any grief. At a meeting for the bereaved he encounters Yoichi, the late Yuki’s truck-driver husband. Overcome by despair, Yoichi obsessively replays the cell phone message his wife left for him on the day of the tragedy. Time progresses and a numbed Sachio struggles with the practical aspects of widower-hood. He invites Yoichi and his children, Shinpei and Akari, to dinner. Learning that young Shinpei has discontinued his studies in order to care for his sister, Sachio volunteers to care for the children and so begins a personal transformation to his emotional re-engagement with the world.

The Long Excuse is Motoki’s first starring film role in the seven years since Departures (2008). The film is a complicated but compelling study of a self-absorbed and emotionally-detached man flailing in a tangle of guilt and resentment. Fuelled by a narcissistic self-loathing, his motivations and actions initially leave the audience uncertain. The film delivers no moment of epiphany but rather a creeping realization that Sachio is completely sincere.

As the film moves forward and Sachio’s connection deepens with the children, in particular, the solemn, repressed son Shinpei. Director Nishikawa trained under Hirokazu Kore-eda (After the Storm) and she clearly takes a page from the master’s book, drawing out strong naturalistic performances from untrained child actors. But the film belongs to Motoki: a pivotal scene when he lashes out with petulant jealousy as another woman enters Yoichi’s family life is heartbreaking. In another scene, a cloying TV interviewer asks him what message he would like to convey to his wife in heaven, sparking a tirade on his wife’s selfishness for leaving him alone that is by equal measure hilarious and excruciating to watch. It all culminates in a hopeful conclusion that is achingly poignant.

Miwa Nishikawa is an accomplished writer and director, adapting her own best-selling novel, Nagai Iiwake with a firm but invisible directorial hand. As well, Motoki’s work here is certain to attract the attention of the Japanese Film Academy for the best lead actor award. The Long Excuse is Nishikawa’s best film to date and highly recommended.


Is the film in the public spotlight?


thanks for sharing it