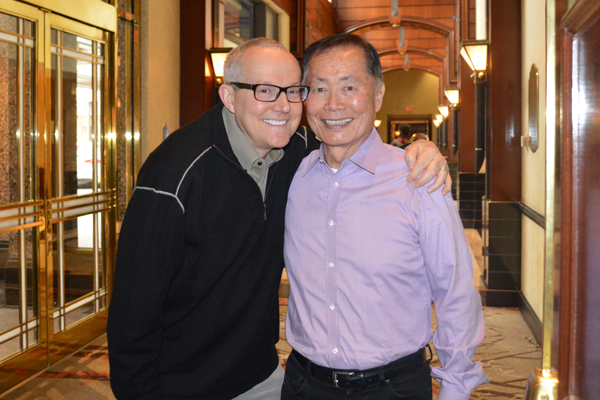 “A musical?” says Leonard Nimoy, “on that?”  He bursts out laughing.

“A musical about the internment?” asks U.S. Senator Daniel Inouye, wincing, “No, I would have never imagined that.”

Actor, activist, and media personality George Takei has an interesting life, but the new documentary To Be Takei so unflinchingly casts a light on the struggles he has triumphed over that audiences can’t help but leave inspired.

We all recall his days as Sulu at the helm of the U.S.S. Enterprise in the original Star Trek TV series and film franchise. “Destroying once and for all,” says Takei with his characteristic humour, “the stereotype regarding Asian drivers.”

He was among the first wave of “stars” to take a run at politics and in the early 1970s, he took a shot  joining the Los Angeles City Council.  He became a member of the municipal board of directors that planned the Los Angeles subway, but was called to return to Hollywood as the first series of Star Trek motion pictures was launched.

Many follow Takei’s more recent exploits from his work on The Howard Stern Show to his massively popular social media musings that have attracted an audience in the millions.  Again, Takei’s humour is the key to his second wave of success (he is oft described as a “media superstar”), but the original intent for Takei’s social media work can be traced back to a recurring theme that has haunted his earliest memories.

Takei went to social media in order to raise awareness among the general public about the Japanese American internment, and to build an audience for a project he was developing called Allegiance.

Allegiance has blossomed into a full-fledged theatre musical partially based on the experiences of Takei’s family during the Japanese American internment.

Fast forward to the reaction of Nimoy and Inouye: imagine – a musical about internment?  How could it possibly work?  Yet, by all accounts, it does.

The first run, 50 performances at the Old Globe Theatre in San Diego were sold out, setting a box office record for the venue.  Allegiance will be coming to Broadway this fall and priority access passes for tickets are selling fast. Often the first reaction to breakthrough ideas is that they’re “nuts”.  Allegiance may just be one of them.

On its face, Takei’s second wave of success seems organic, but the narrative in To Be Takei intertwines two critical elements that are responsible for his renaissance.

First, he works hard.  Relentlessly, Takei takes advantage of his public profile to educate audiences about the realities of the Japanese American internment and the importance of equal rights among all citizens.

If anyone ever had any doubts about his credentials as an activist, those doubts are laid bare within the adrenalized first 15 minutes of the film.

Second, and perhaps most critically, Takei has the unfaltering and loving support of his partner of a quarter century and husband of the past six years (it took that long for California to legalize equal marriage) – Brad (Altman) Takei.  Anyone that has any issue with being gay needs to watch this film.

Brad and George Takei, seen here, after the screening of To Be Takei at the Hot Docs Film Festival. The film showcases their amusingly dysfunctional, yet amazing, relationship. Image courtesy: Chris Hope

As Takei repeatedly reminds commentators in clips featured in the film, “Being gay is not a lifestyle, it is an orientation.”

Brad and George are among the most amusingly dysfunctional yet completely perfect couples anyone could hope to meet, and their mutual respect, admiration and dedication shines through in every situation.

They work together to continue their ambitious work on behalf of Japanese Americans and Japanese Canadians to inspire a new generation to ask questions about the internments.

Musical?  Really.  Allegiance will be coming to major cities across Canada following the Broadway run, and you can be sure Nikkei Voice will be there every step of the way.

To Be Takei was screened at the Hot Docs Film Festival in Toronto on April 26th and 27th.

Information on Allegiance can be found at: http://www.allegiancemusical.com

Be sure to take a look at George Takei’s Twitter profile and facebook page. Through his social media work, Takei is able to reach millions with everything from social activism to musings about life.


[…] by 120,000 people. The musical brought in many curious eyes with its major star power, with leads George Takei and Lea Salonga. Takei is most notably known as playing Hikaru Sulu on Star Trek, as well as […]