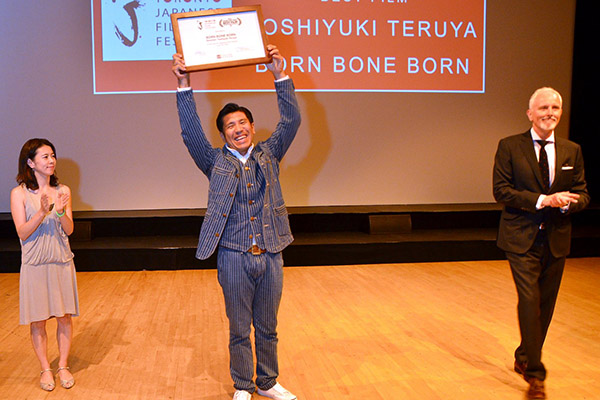 TORONTO — Director Toshiyuki Teruya‘s original script for a film about Aguni Island in Okinawa was much different from the final film.

Teruya wanted to write a story about a man trying to hide an affair from his wife in a town with a population of less than 800. While looking for locations to base the film in Aguni Island, a producer told him about the tradition of bone-washing and how it was still practiced by some on the island.

“I didn’t know about the bone-washing custom and was actually shocked when I heard about it the first time,” says Teruya. “I got rid of the original script, and rewrote a new script about bone-washing.”

As a result, Teruya wrote Bone Born Bone, which brought him to the Toronto Japanese Film Festival (TJFF) for the Canadian premiere of the film on June 24. Teruya introduced the film and answered audience questions afterwards. Before the film premiere, Teruya sat down with Nikkei Voice and a translator to talk about his film. 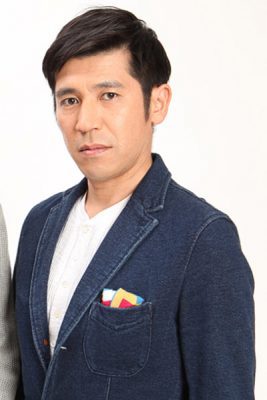 Also known as Gori in the comedy duo “Garage Sale,” Teruya is a comedian, variety show host, actor, director and musician. Teruya is from Naha, the capital of Okinawa prefecture. His film is a drama/comedy about a family whose matriarch dies and four years later, the fragmented family reunites to take part in the bone-washing ritual.

Father Nobutsuna (Eiji Okuda) has been consoling himself with alcohol since his wife’s death, when his judgmental son Tsuyoshi (Michitaka Tsutsui) returns to the island without his wife and children, and daughter Yuko (Ayame Misaki) returns pregnant and single. While the story circles around grief and loss, director Teruya makes sure to balance the heavy tones with comedy.

Despite being from Okinawa, Teruya says he had never heard of bone-washing. Many in Japan may never have heard of the tradition either, and a film about bone-washing can sound a little terrifying for those unfamiliar.

“I was scared when I first heard it. There was actually a video left about bone-washing and I saw it,” Teruya explains. “It wasn’t scary at all. I saw love for the person who is deceased. So when I made the movie, I knew the audience could only see the family love, and not be scared about seeing a mummified body.”

Bone-washing, or senkotsu, is a tradition to respect and honour a deceased family member one final time before they are set to rest for eternity. After a person dies, they are placed in a casket. That casket is place in a tomb. After four to seven years, the casket is removed and the bones are “washed.” Any remaining flesh is removed, the bones are cleansed and then carefully arranged in a new, final resting place. The ritual is seen as a way to dignify a loved one after the decay of death, by reconstructing the cleansed bones.

“Bone-washing is a ritual that used to happen all over in Okinawa. But it was not really bone-washing that I wanted to talk about in the film,” says Teruya. “The main theme is the family love, and I think family love is a universal thing.”

While bone-washing may seem like a foreign idea to many people, not only in North America, but also Japan, there are themes in the film that can apply to anyone, anywhere in the world. Feelings that come with being part of a family, grief around losing a parent, fights between siblings and love between a family. While writing the script, Teruya explored his own thoughts and emotions around his mother’s death.

“In any country, people have a fight among family members, parents and kids, brothers and sisters, but also if you lose a family member it is really sad, it’s not only about Japan. It’s a very universal thing,” says Teruya. “So no matter where you watch this movie, whether it’s Russia, or Canada or China, I’m sure people laugh at the same spots and feel sad about the same scenes.” 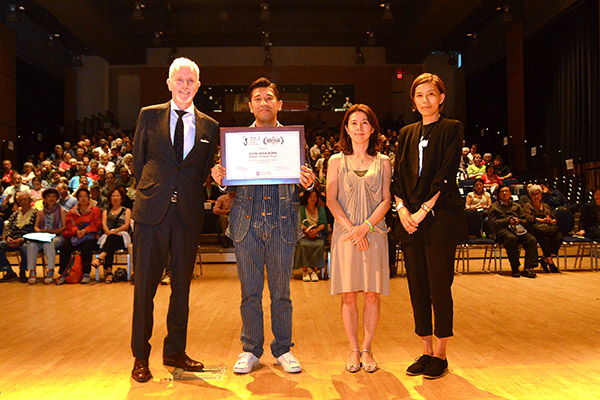 The film has resonated with audiences around the world, seen in the various accolades it has picked up at different international film festivals. The film won the Audience Choice award in New York’s Japan Cuts film festival, as well as being a co-recipient of the Grand Jury Prize at TJFF.

As for the future, Teruya hopes to do more writing and directing. He already has an idea and characters in his mind for next film, which he would like again to take place in Okinawa.