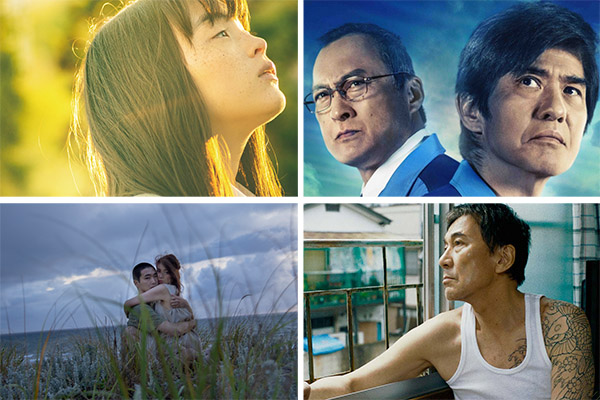 
Bringing the best and brightest of Japanese cinema to Canada. A few of films available at this year’s Toronto Japanese Film Festival. Clockwise: Voices in the Wind, Fukushima 50, Under the Open Sky and Under the Open Sky. Photo credit: TJFF.

TORONTO — Autumn 2020 is a good season for fans of Japanese cinema. In September, the Toronto International Film Festival highlighted two Japanese films among its scaled-back lineup, both from top female directors.

In October, the Toronto Japanese Film Festival, postponed from June, will present 22 new films in a three-week online edition accessible across Canada. One of the most exciting titles of the season is director Miwa Nishikawa’s (Sway, Dear Doctor, Love for Sale, The Long Excuse) sixth film and TIFF entry, Under the Open Sky. Adapted from Ryozo Saki’s 1993 Naoki Prize-winning novel, Mibuncho, it is the director’s first film not based on a self-penned screenplay.

At its centre is Mikami (Koji Yakusho), a middle-aged ex-yakuza who has spent most of his life in prison. Released after serving 13 years for murder, he struggles to get a proper job and fit into a society which, like our own, treats ex-convicts with mistrust and social ostracism. Mikami also hopes to find his mother, a geisha from whom he was separated as a child. He applies to a sensationalist TV program looking for redemption stories and meets young director, Tsunoda (Taiga Nakano). The director initially treats Mikami with distaste and condescension but comes to genuinely care for his subject.

Mikami has a similar effect on Matsumoto, a supermarket manager who mistakenly accuses Mikami of shoplifting and desperately tries to atone for the transgression. For both Tsunoda and Matsumoto, Mikami becomes a vehicle to reconnect to their better selves.

While Tsunoda’s redemption program falls flat, Nishikawa’s tale of Mikami’s halting pursuit of dignity and belonging is among the director’s best work. Overpopulated with secondary characters and narrative diversions—the comical driving lesson sequences are out of sync with the rest of the drama and could easily have been cut—the great Yakusho carries the film and delivers a career-topping central performance. His scarred and tattooed Mikami radiates naiveté and open-heartedness but with a simmering undercurrent of violence and rage.

His presence is simultaneously sympathetic and disquieting as we are never able to intuit what his reaction might be to a given situation. He is someone we too come to care about deeply. Nishikawa, as always, directs with great empathy and intelligence. Her poignant, touching film deserves an audience. Find a way to see it.

As the 10th anniversary of the tragic March 11 Tohoku earthquake and tsunami approaches, the Japanese film industry has turned much attention to the disaster. One of the festival’s big titles, Fukushima 50, (also reviewed in this paper) is a sprawling, star-studded tale of bravery and sacrifice. But it is two smaller titles, focusing on the emotional fallout of the tragedy, that attracted the most critical attention.

Nobuhiro Suwa’s Voices in the Wind received a Special Mention at the Berlin International Film Festival. Based on an actual pilgrimage spot called the “wind phone,” a disconnected telephone booth in Otsuchi, Iwate Prefecture, where mourners go to speak with people they lost.

Haru (Serena Motola) was nine when she lost her family to the tsunami and moved to Hiroshima to be raised by her aunt. Compelled by the weight of her sorrow, Haru starts hitchhiking across Japan to her old home. Along the way, she encounters people who have endured tribulations of their own: a family of Kurdish refugees involved in the cleanup effort; Morio (Hidetoshi Nishijima), a Fukushima nuclear worker living in his car because he is too traumatized to return to home; and Imada (Toshiyuki Nishida) who tells of the discrimination faced by residents evacuated from the exclusion zone. At the end of her journey awaits the “wind phone.”

Filmed in a semi-documentary style and featuring a raw, haunted performance from Motola, Voices in the Wind is a heart-breaking inquiry into the remaining trauma of 3.11 and how we learn to live with the unbearable.