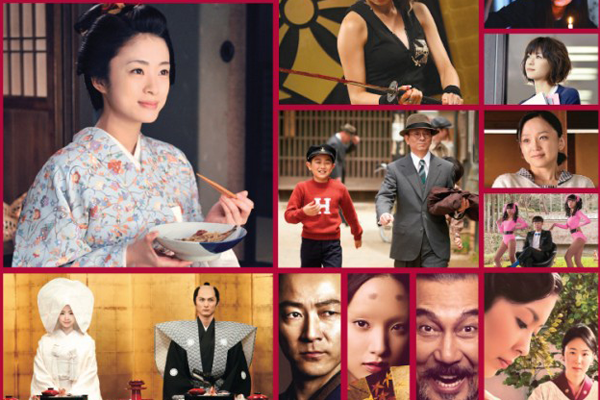 This is the third time the festival has been held at the Japanese Canadian Cultural Centre, and it seems to be getting bigger and better with every year.

Premiering at this year festival is Yuzo Asahara’s A Tale of Samurai Cooking, a love story that follows Oharu (portrayed by Aya Ueto) as she helps Yasunobu (Kengo Kora) learn how to cook. It’s a light-hearted look into the culinary world of the samurai-era, but one that proves a challenge as Yasunobu needs quite a bit of help.

The festival will be held from June 12 to 27, and will feature 18 films. Some information from the press release:

– The North American premiere of Yoshihiro Nakamura’s fast paced thriller The Snow White Murder Case, one of the most anticipated movies of 2014, starring Mao Inoue and Go Ayano. Director Nakamura will be joining us at the festival to introduce his        film and meet his Toronto fans.

– The North American premiere of Takashi (Always: Sunset of 3rd Street) Yamazaki’s The Eternal Zero, still in Japanese theatres and one of 10 most popular films in Japanese cinema history. Starring Jun’ichi Okada and Mao Inoue

– The Canadian premiere of Shin Togashi’s Oshin, the new film version of the beloved NHK drama

– The Canadian premiere of Yoji Yamada’s The Little House, winner of the Berlin Silver Bear for best performance by actress Haru Kuroki

– Based on his novel, and later internationally-acclaimed stage production, the Canadian premiere of Daisuke Miura’s controversial tale of 4 men and 4 women together for one night in Roppongi sex club: Love’s Whirlpool

– The Canadian premiere of the film Kinema Jumpo and Eiga Geijutsu magazines both called the best film of 2103: Precoross’ Mother and her Days; a gentle drama with Ryo Iwamatsu and Harue Akagi

– A TIFF encore presentation of the Sion Sono’s insane yakuza comedy Why Don’t You Play In Hell?, winner of TIFF’s Midnight Madness Award

Check out the Japanese Film Festival’s website for more details on showtimes and special guest appearances.