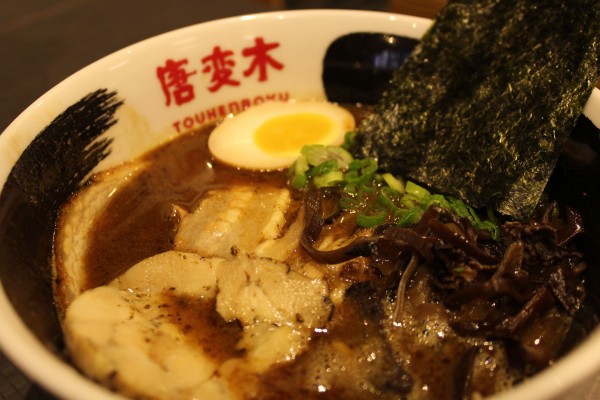 Touhenboku Ramen is about a five minute walk from Osgoode station in Toronto, and it’s creating quite a stir.

The restaurant opened on November 13th 2013, uses in most dishes a chicken broth soup, which is rare find in Toronto. It’s plain, but with a rich taste. Customers who wanted a taste waited in line on  opening day and savoured the ramen. 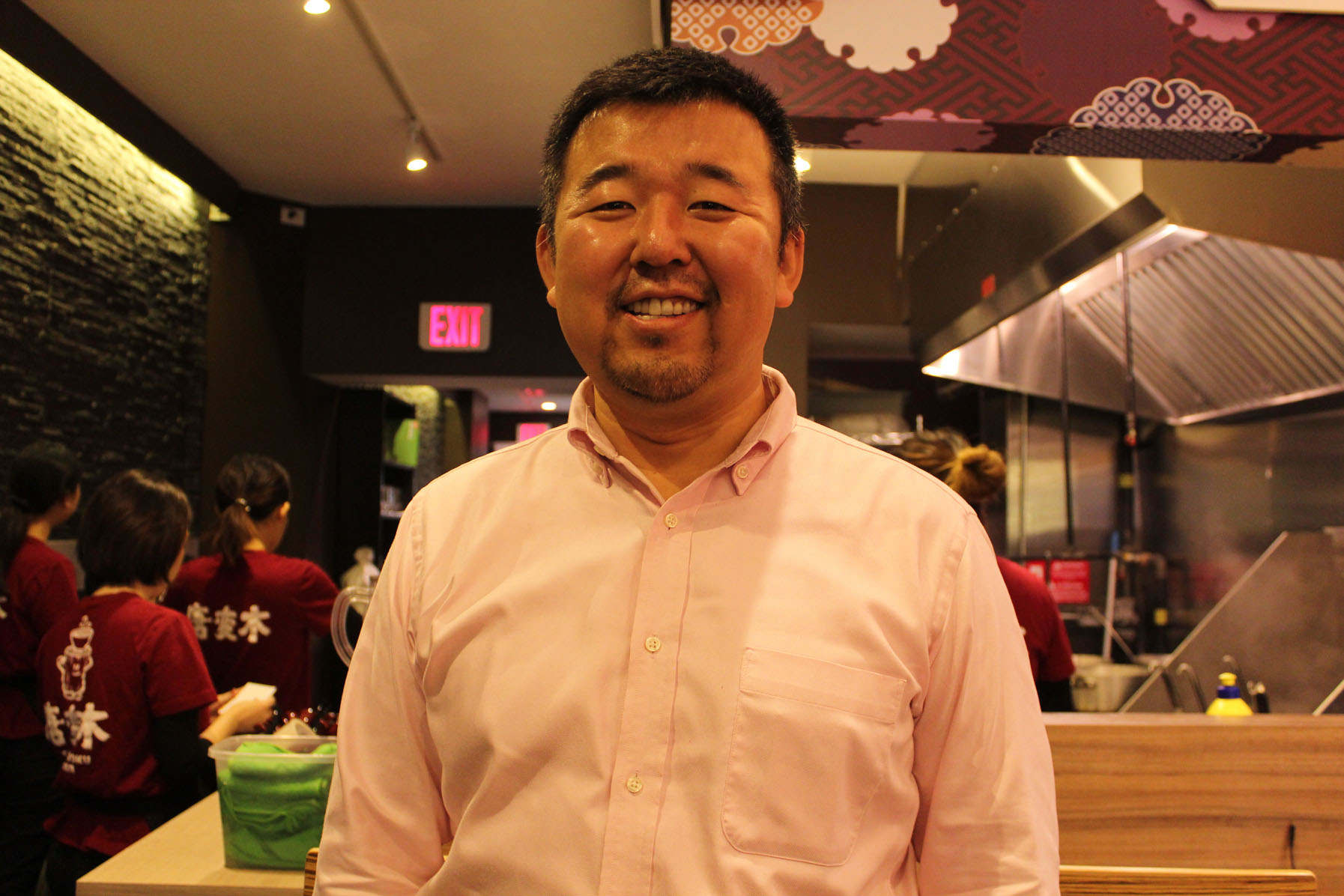 Zuimei Okuyma, the owner, loves ramen and wants people to know that Chicken pai-tan ramen is in North America.

According to him, the chicken broth makes skin beautiful and smooth as it contains rich collagen. As a result, it’s a popular dish among women, but it’s popular among other people for another reason.

“In North America, it’s Tonkotsu. However some avoid eating ramen in pork broth due to their religion or cultural differences. Many people like eating this ramen because it’s made with chicken broth. I want people to know the true taste of Japanese ramen and know that such a delicious ramen is able to be made from chicken,” Zuimei said having full confidence in his chicken pai-tan ramen.

Zuimei took his restaurant’s name from a friend who owned a cafe called Touhenboku.
Touhenboku means “blockhead” or “stupid person” and at first sight it seems to have a bad connotation, but this is far from the case. 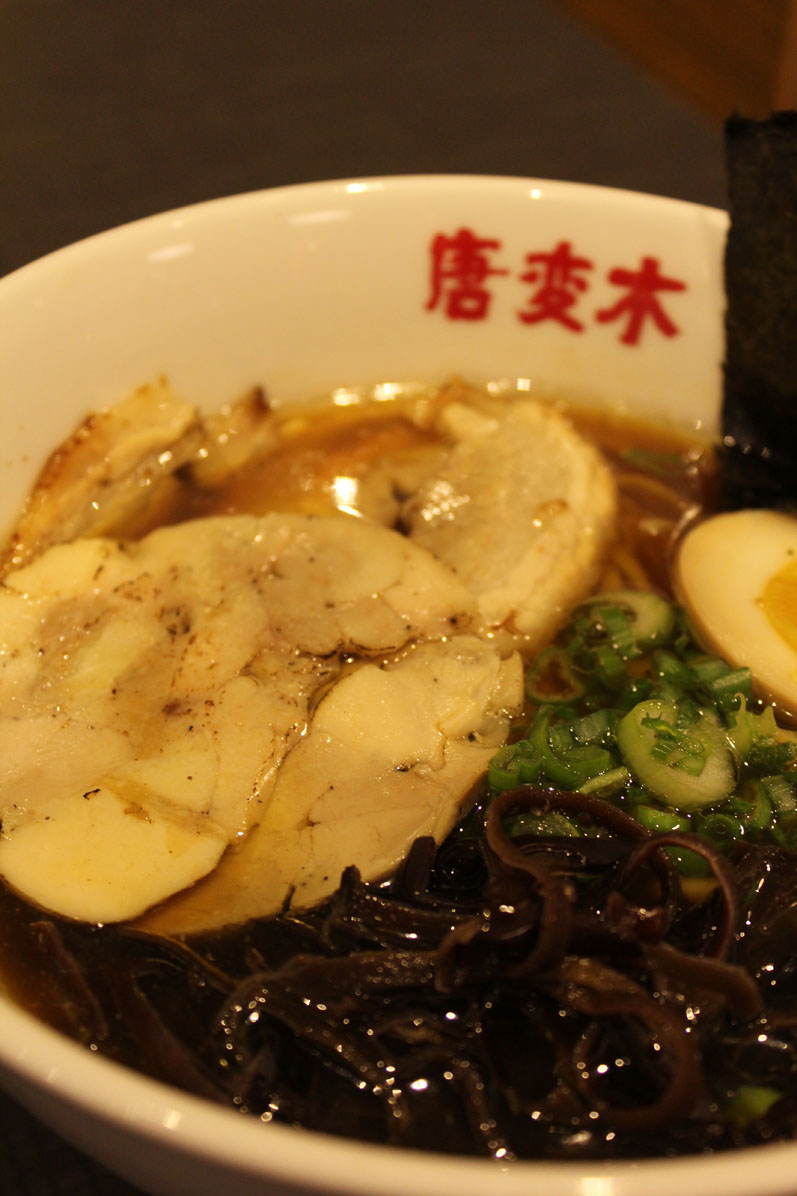 Ma-Yu Pai-tan Ramen (Black Ramen), Zuimei’s recommendation, has savory garlic flavor with home-made Ma-Yu which is sesame flavoured oil. When Ma-yu is added to Ramen, the taste will be deep, rich, with a pleasant aftertaste.

“Ma-yu matches Paitan very much. Ma-yu is choosy about noodles. So I dare not to make people choose flavoured oil,” he said.

The soup has a slight viscosity and noodles get tangled in the soup. The noodles are springy and chewy. Because Zuimei uses home-made noodles made of special mixed flour without  antiseptics by using Japanese noodle making machine. Zuimei was on a quest to find the perfect flour for three months. Zuimei tries to make safe noodles without any of the additives seen in most noodles found in other shops around Toronto. 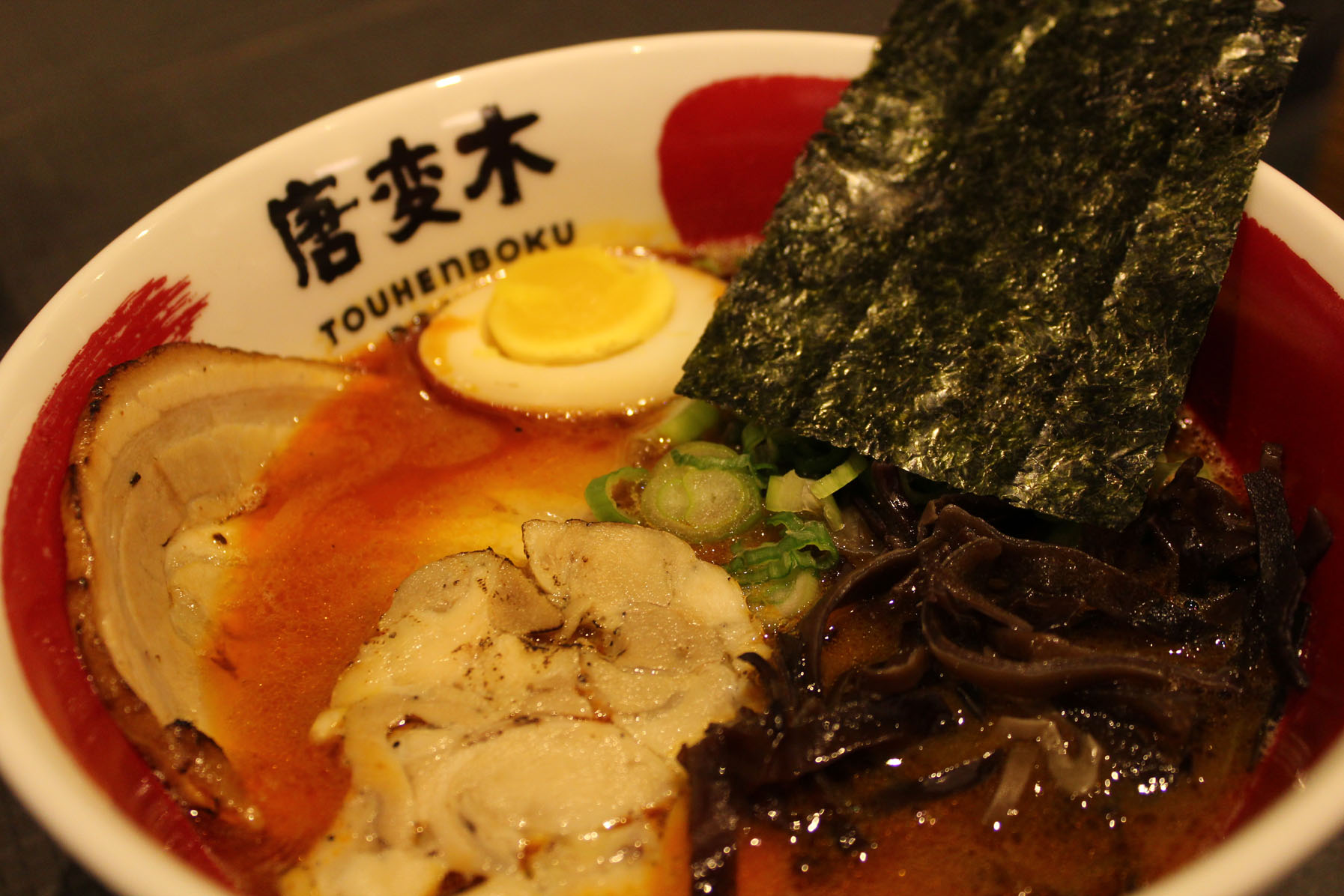 We recommend Spicy Pai-tan Ramen (Red Ramen) to a person who doesn’t like too spicy food much. You would feel spicy later when you eat it. And you can choose cha-shu from three kinds: pork belly, Boston butt, and chicken. Chicken cha-shu is very light and simple. Side dishes are enriched. Skin of gyoza (fried pork dumpling) is thick and chewy. Miso as a secret ingredient is added into gyoza, so that gyoza has something different. Karaage (fried chicken) has crispy touch and texture. It reminds us Japanese what true karaage tastes like.

There are also six kinds of sweets served at the restaurant. These cakes are made in accordance with a special recipe that   pastry chefs at famous hotel in Japan often make. The cakes have the same sweetness as  Japanese ones and are made in a kitchen at Touhenboku Ramen, and are freshly served.

“I want to open another branch upcoming in spring. As there are black and red ramen, it is supposed to be designed with the colour arrangement of black and red. I have already had some offer for opening branch,” Zuimei said.

“Finally, I would like to open it in Japan,” Zuimei said. After interviewing, Zuimei went to speak with his customers.

Zuimei always listens to customer’s opinions and pursues the best ramen every day, and the restaurant’s selection is improving as we speak.