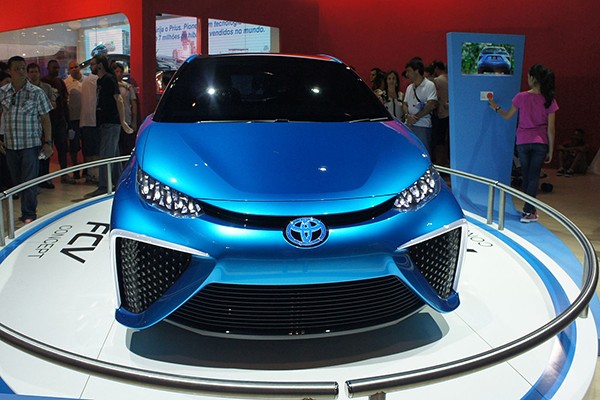 LAS VEGAS — At the Consumer Electronics Show, Toyota made a clear push for hydrogen-cell technology by giving competitors free access to its patents until 2020.

Bob Cartner, a senior VP with Toyota’s US office, said the technology has a high social value and this move will help speed up research on the alternative fuel source for cars.

In a world where it’s predicted that oil deposits will run dry over the next 50 years, Toyota seems to be looking far into the future, which is apt as it that is the translated name of its first-generation hydrogen-electric car, the Mirai.

“We believe that hydrogen electric will be the primary fuel for the next 100 years,” Carter said in an interview with Geekwire. “Hopefully by sharing these patents with others, the new fuel cell components and systems can be refined and improved to increase our performance, reduce our costs, and attract a broader market of buyers,” he said.

Since the early 2000’s, the company has filed over 2,000 patents for the systems and components of its best-selling hybrid, the Prius.

Toyota’s goal, according to a write up by the Wall Street Journal, was to make it much more difficult for its competitors to develop their own hybrid technology. Companies like Ford and Nissan took it hook, line, and sinker opting to use the already-developed technology rather than developing its own.

The Ford Escape and the Nissan Altima are examples of cars that use the Toyota-developed tech, but disputes were raised as with any patent in a competitive market.

Alex Severinsky, an engineer and immigrant to the United States, filed a lawsuit against the company in response to its presumed use of a 1994 patent he held.

After a six-year battle that began in 2004, Toyota and Paice Hybrid (Severinsky’s company) reached an agreement and Severinsky was given recognition for his innovations.

“Finally people understand the merits of what I invented and give it the proper value,” he said in 2010. “Toyota is the leading technology company and finally appreciates the value of the invention.”

And In 2015, hybrid cars are generally accepted in the market with companies like Nissan, Ford, and Chevrolet having options for buyers.

The patent war cost the company, but helped secure the technology required to continue developing the cars. It also had the effect of bringing hybrids into the West’s media space, which is the one of the main target markets for the Mirai.

The move to release the patents this time could help the company’s image. It mirrors a move made by Tesla, an electric car manufacturer, that hoped by releasing its patents it could be seen as a leader in technological innovation, which is precisely Toyota’s aim in their hydrogen-fuelled future.

The Toyota Mirai, which will initially be released in Japan and in California, where an infrastructure for hydrogen-fuel cell cars is available, has a much more difficult road ahead of itself than its hybrid cousins.

The main problem facing the new car is the unavailability of hydrogen-fuelling stations. A typical fuelling station, according to online sources, costs around 1 to 2 million dollars to create. There are initiatives like the Californian Fuel Cell Partnership that help alleviate some of the costs.

As well, over 70 of the patents given away are related to hydrogen production and supply, and the company is giving adopters of the technology a package of incentives.

The company is offering free fuel for three-years after the initial buy, a one-week rental service for owners who feel confined by the car’s 300-mile range, a concierge service, and knowledge that the car can be used to power your home if need be. The latter of the offerings is, of course, more related to Japan where homes are smaller.

Unfortunately there is no word on the car’s availability in Canada, but as there are only four fuelling stations available in the country its understandable why the True North might not be the ideal market.

The Mirai will have a $57,500 MSRP, but one can only hope that through the use of patent sharing other alternatives will eventually become available. As the demand for the cars increase, so too will the number of stations for hydrogen fuel.

However, with record low oil prices making drivers finally be able to smile at the pumps, the United States and Canada are still in the firm grasp of dinosaur-powered autos. By releasing the patents for free to other companies, perhaps it hopes to find an entrepreneur who will bring something new to the table and help develop a cost-effective hydrogen infrastructure for the Wets.

But Toyota’s vision for its new cars is ambitious and Carter says he has high hopes for the clean technology.

“President Abraham Lincoln said the best way to predict the future is to create it,” Carter said. “That’s what we’re doing at Toyota.”