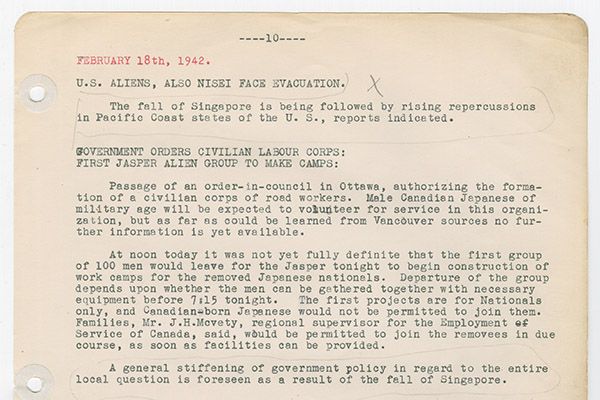 BURNABY — Among the community leaders who advocated for the needs of Japanese Canadians during the internment years was Jitaro “Charlie” Tanaka, an Issei man who with his wife, Sumiko, compiled a chronicle of the government restrictions imposed against Japanese Canadians and community responses made between Dec. 7, 1941, and Oct. 16, 1944. 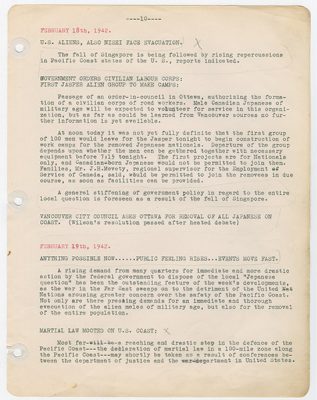 During the war years, Spain was a neutral country and the Spanish Consul was in charge of overseeing the rights of Japanese nationals in Canada under the Geneva Convention. Jitaro acted as a translator and advisor for the Spanish Consul and used this chronicle as a primary reference.

The chronicle is 177 pages long and stored in two volumes. It is typed on hole-punched letter-sized pages and was created by retyping local newspaper articles, headlines, and organizational literature like pamphlets. Among the types of events recorded in this chronicle are: local and provincial government meetings, increasing restrictions imposed against Japanese Canadians, news from Nikkei in other provinces, and responses from local Issei and Nisei groups.

On page 10 of the chronicle, a stark description of the escalation of government measures shortly following the bombing of Pearl Harbor, presumably copied from newspaper headlines: