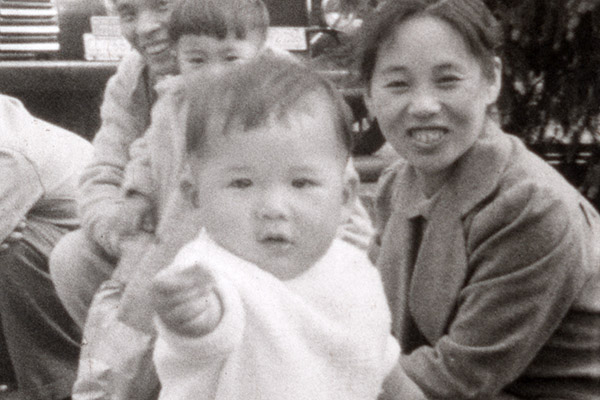 This image is a still frame taken from of one of our newly digitized home movies. The films range in date from the 1930s to the 1970s. They offer a unique perspective into the daily lives of Japanese Canadians throughout the decades of prewar, internment and postwar.

These films are important to the Nikkei National Museum because they represent the experiences of Japanese Canadians captured from their own perspectives, rather than a narrative created by the Canadian government. Home movies created pre-1949 by Japanese Canadians are incredibly rare, as cameras were restricted during internment. It took incredible determination or special permission to bring a film camera into a designated camp.

The prewar films are also important to our collection as most home movies created during this time were lost during dispossession and internment.

The image above was taken from a film created by Tomojiro Inouye, in 1940. The film was shot in Mayo Duncan and features daily life such as strolling the beach and forest on Vancouver Island. This rich collection also features life in Lemon Creek internment camp, showing the community celebrations and the Inouye family in their shack. By viewing these films we can gain a more accurate glimpse into living conditions, community and hardships families faced while interned.

Here at the Nikkei National Museum & Cultural Centre we have been working hard to digitize and preserve the films that still exist today. Since these films are extremely old, they have been degrading in quality at rapid rates. Through our “At Risk!” project, completed with support from Library and Archives Canada, we have digitized these films to increase access by the public. We have also ensured that the original films are stored in optimal conditions to ensure their long term preservation.

Join the Nikkei National Museum for Nikkei Mubi: A Film Screening of Japanese Canadian Home Movies Digitized from the 1930s-70s on Feb. 8, 2 – 3:30 p.m. For tickets and more information, click here.