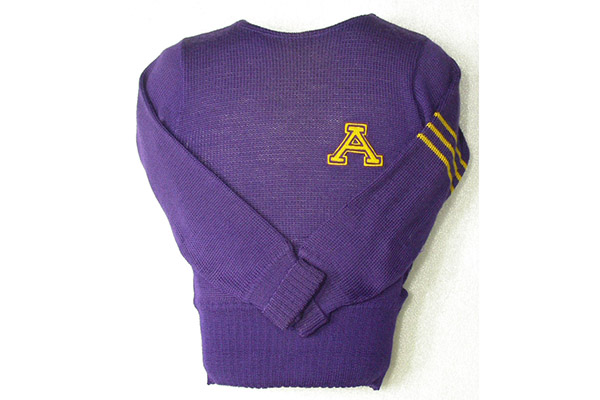 BURNABY — Happy fall! As you start to unpack your warmer clothing, here is a treasure we are excited to share during these cooler months. Preserved at the Nikkei National Museum & Cultural Centre (NNMCC) is Kaye Kaminishi’s purple Asahi Baseball Team sweater with a yellow A on the chest and three yellow bands on the left arm.

This sweater is one of four known original Asahi team uniforms to have survived since the team’s last game in 1941. The other three items are Kaye Kaminishi’s Asahi uniform jersey and pants at the NNMCC, an Asahi jersey at the Japanese Canadian Cultural Centre in Toronto, and Naggie Nishihara’s Asahi sports jacket at the Canadian Baseball Hall of Fame.

Koichi Kaye Kaminishi was born on Jan. 11, 1922, in Vancouver, B.C. In 1939, at the age of 17, his dreams came true, and he joined the Asahi Baseball Team as a rookie. A skilled athlete, Kaye was dubbed “the Vacuum Cleaner” for quickly scooping up ground balls.

He played with the team until the 1942 forced dispersal and dispossession of Japanese Canadians from the West Coast, resulting in the forced disbandment of the Asahi team.

Today, Kaye is the last surviving member of the team. He continues to support players of all ages to pursue their love for the game.