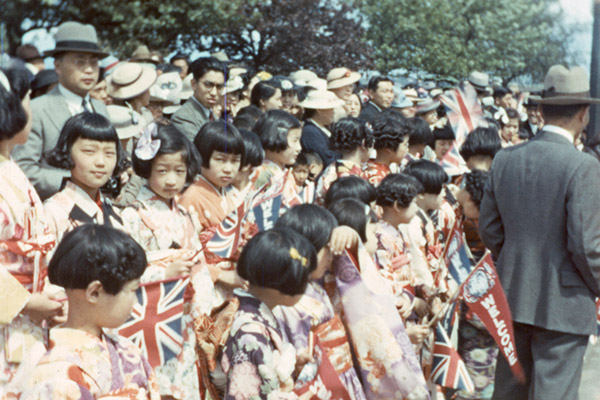 BURNABY — This treasure from the Nikkei National Museum‘s vault is a black and white positive and colour reversal 16mm film, professionally produced by Shinkosha, circa 1937.

The first part of the film is in colour and likely filmed in or before 1939. The film begins with Japanese Canadian men walking past the camera. In some of their arms appear to be judogi, traditional uniforms used for judo practice. Of this group of men is Shigetaka (Steve) Sasaki, known as the father of judo in Canada. Based on buildings in the distance, this location could be Sasaki’s first judo club, called Tai Iku, which opened in 1924 on the 500 block of Alexander Street in Vancouver.

The next shot shows the same group of men walking around the neighbourhood near Gore Street and East Cordova. Notable locations include the Queen’s Hotel at 206 Main Street near East Cordova. The men wear blazers with a patch depicting a shield on the breast pocket. The top of the shield displays the Japanese flag.

Japanese Canadian girls gather at the Canadian Pacific station (now Pacific Central) near Main Street and Terminal Street to welcome King George VI and Queen Elizabeth. They wave British flags and welcome pennants. Japanese Canadian men stand in a row wearing matching blue blazers. On their breast pocket is a Japanese character, possibly 系 or 柔? Other men are wearing regular suits. Of the men is Etsuji Morii, Shigetaka (Steve) Sasaki, and in the top hat is Eikichi Kagetsu, an entrepreneur in lumber and rail and founder of Fanny Bay Oysters. He was one of the wealthiest Japanese Canadians prewar, and his estimated loss during the dispossession is $8 million in today’s dollars. There are more shots of the Japanese Canadian girls in kimonos holding British flags.

The next scene takes place outside Hotel Olympic, where Shigetaka (Steve) Sasaki walks with other men outside the hotel. Within the group of men is Kanō Jigorō.

This next part of the film is black and white and likely filmed around 1937. These sequences take place chronologically before the scenes described above, likely at the same time as Prince Chichibu’s visit.

Aboard the Heian Maru docked in Vancouver, Japanese men and women greet each other. Kanō Jigorō is present on the ship with Shigetaka (Steve) Sasaki and other men. Some of these men also appear in the final scene when on top of Hotel Vancouver.

Escorted by one of the men, Jigorō walks off the boat and by a row of Japanese Canadian boys, who all simultaneously bow to him. The next scene takes place at Grouse Mountain. There, Etsuji Morii stands with Jigorō. The men return to downtown Vancouver outside a train station. Sasaki and Jigorō board the caboose of a train. A crowd of Japanese Canadians, including Etsuji Morii, watch. They wave as the train departs. Sasaki goes off on the train with Jigorō to Banff, likely to promote judo. A year prior, in 1936, they went to Berlin together to attempt to get judo into the Summer Olympics.

Watch the film and more at www.youtube.com/user/nikkeimuse or below: