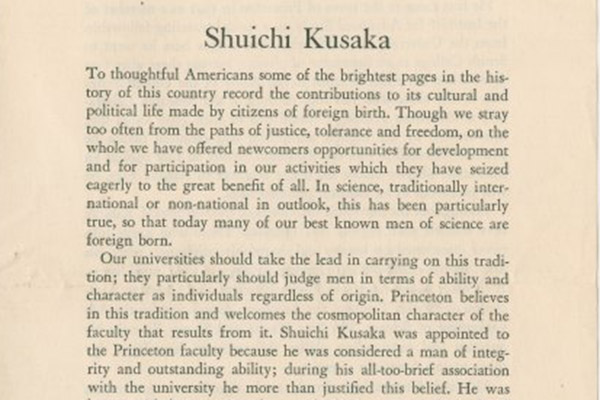 BURNABY — Shuichi Kusaka was an accomplished and respected theoretical physicist whose legacy continues to have a lasting impression today.

Born in Japan in 1915, Shuichi moved to Vancouver, B.C. with his family when he was five years old. He was skilled in academia and graduated from the University of British Columbia with a Bachelor of Arts with first-class honours in mathematics and physics in 1937. Shuichi was awarded the Governor General’s Academic Medal for graduating at the top of his class, becoming the first Japanese Canadian to receive the medal. 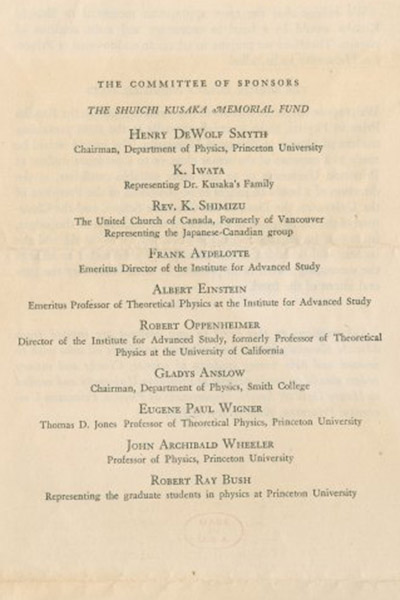 Shuichi continued his academic success with a Master of Science in Physics from MIT in 1938 and a PhD in theoretical physics in 1942, studying under Dr. Oppenheimer at the University of California. Though Dr. Kusaka faced discrimination and anti-Japanese racism throughout his career, especially in the wake of the Second World War, his colleagues vouched for his loyalty and skill.

Shuichi would go on to work at Princeton and Smith College before enlisting in the United States army in 1945 to officially become an American citizen. Following his service at Aberdeen Proving Ground in Maryland, he returned to Princeton as an instructor in 1946 and was promoted to assistant professor the following year.

Unfortunately, on Aug. 31, 1947, Shuichi died at the age of 31 in a swimming accident, a loss his many friends and colleagues felt deeply.

Eiji Yatabe was a close friend of Shuichi’s from their time together at the University of British Columbia and as members of the UBC Japanese Students Association. Eiji was asked by the family to deliver the eulogy at Shuichi’s memorial service in Montreal, and helped organize the service, officiated by Reverend Tak Komiyama.

The fund was created by family, friends, and colleagues of Kusaka, including Reverend Kosaburo Shimizu, Dr. J. Robert Oppenheimer, and Albert Einstein. The prize continues to be awarded today, helping new generations of students pursue careers in physics.

The Nikkei National Museum holds Dr. Shuichi Kusaka’s collection as well as the Eiji Yatabe collection. Explore these materials and more from the museum at www.nikkeimuseum.org.