Treasures from the Nikkei National Museum: The beginnings of the Wives and Mothers Club 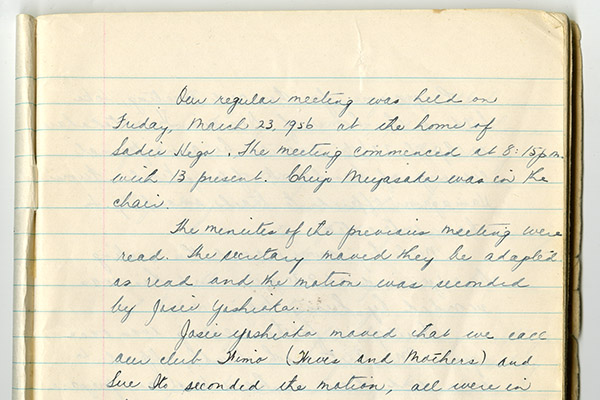 BURNABY — As Cyndi Lauper famously sang in 1983, “girls just wanna have fun.” Little did she (probably) know that this group of Japanese Canadian women was already doing just that 30 years before that song hit the charts.

This group’s history has come to us through a new treasure in the repository, donated by Miyoshi “Mickey” Tanaka, in the form of a notebook full of meeting minutes from WIMO, the Wives and Mothers Club. The meeting minutes capture the circumstances of the group’s inception.

The Wives and Mothers Club was established as a social club for married women in 1955 and was based in B.C. around the Lower Mainland and particularly Vancouver. They met for the first time on Thursday, Nov. 10, 1955, at the home of member Josie Yoshioka—though the group had yet to have a name on that day. It was Yoshioka who suggested just a few months later, on March 23, 1956, that the club be called WIMO (Wives and Mothers) to unanimous agreement.

More than a year later, in February of 1957, a proposed constitution for the club was read, and members were “requested to give it serious study so that it may be accepted at the next meeting with any changes to be made if required.” After a final discussion on March 17, 1957, the constitution was adopted after minor changes. 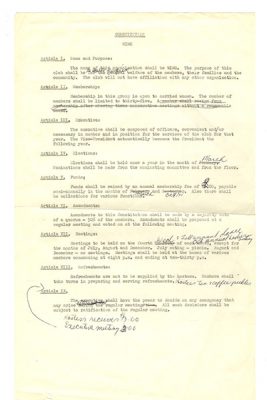 The WIMO Club Constitution is comprised of the following articles:

Article I: Name and Purpose

The second version of the WIMO Club Constitution contains the same text as the first, with the following changes: the last sentence of Article II is crossed out; the fee listed in Article V has been crossed out and changed to the monetary amount of $2; the months of February and September are crossed out and replaced with an annotation for March and October.

The adoption of the WIMO Constitution was to be the beginning of more than 50 years of WIMO Club history.

Explore more about the WIMO Club and the Tanaka Family Collection online at www.nikkeimuseum.org.