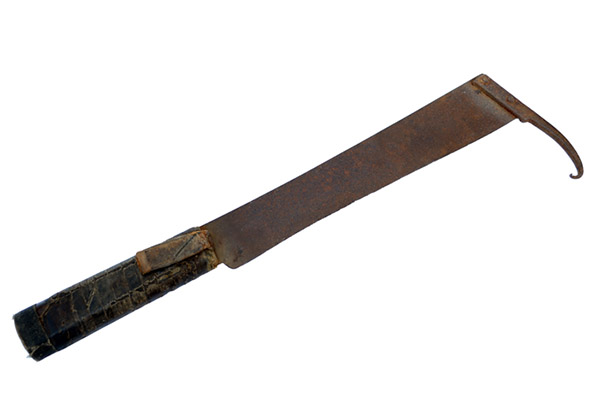 BURNABY — Sugar beet knives were used by many Japanese Canadians before, during, and after the Second World War to harvest sugar beets.

The hook was used to lift the heavy beet from the ground, then the beet was “topped,” meaning the leaves were cut from the beet. Beets were harvested in the fall. Labouring on sugar beet fields meant working from dawn to dusk, seven days a week. For many labourers, it was back-breaking work.

While some Japanese Canadians chose to work in sugar beet fields in the early 1900s, many Japanese Canadians from B.C. were moved to sugar beet fields in Alberta and Manitoba in 1942, as one of few options for families to stay together during the internment. Roy and Lillie Yano kept this topping knife as a reminder of their hard lives in Alberta where they laboured for ten years, from dawn to dusk, only earning $900 between them annually.

Explore more from the Yano Family collection at www.nikkeimuseum.org.

THIS ARTICLE WAS REPRINTED FROM NIKKEI VOICE’S NOVEMBER 2020 ISSUE. SUBSCRIBE OR DONATE TODAY TO HELP SUPPORT OUR NEWSPAPER.