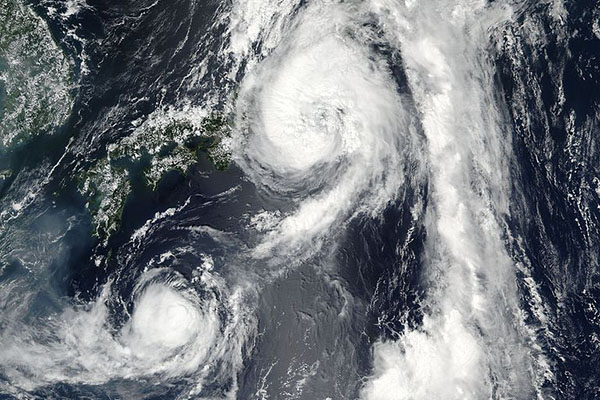 In a photo taken from the United States National Oceanic and Atmospheric Administration’s Suomi NPP Satellite, Typhoon Lionrock can be seen in the Southwestern area over the Greater Tokyo Area on August 22, 2016. Photo Courtesy: NASA

Eleven people have been pronounced dead and three are still missing. The typhoon also caused considerable property damage, power outages and widespread flooding. Prime Minister Shinzo Abe, was forced to return home from a trip to Kenya, where he was at a conference about African development, in order to oversee preparations for the storm.

Nine bodies were recovered at a one-story nursing home in the town of Iwaizumi, when the facility flooded with mud and water. The nursing home cared for elderly patients suffering from dementia, according to Japanese public broadcaster, NHK. The location of the other fatalities in the prefecture are not clear.

All three of the missing persons are from Hokkaido; one apiece in Taiki, Shimizu and Shintoku, after falling into rivers in each of the respective towns.

Iwate Prefecture was one of the hardest hit by the 2011 Tohoku tsunami and earthquake. Ofunato in Iwate prefecture, a city where 340 people were killed and almost 3,000 homes destroyed in the disaster five years ago.

Typhoon season typically lasts from May to October in Japan, with August and September being the peak months of extreme weather. According to the Japan Meteorological Association, the average number of tropical storms during typhoon season is 25.6, with an average of 2.6 typhoons per year (defined by the JMA as a tropical cyclone that reaches a wind speed of 119 km/h or 74 mph). So far in 2o16, there have been four typhoons.

Lionrock has now cleared Japan, pushing back into the Sea of Japan, but caused further flooding and damage in Russia, eastern China and the Korean Peninsula.

Click the video below to view raw footage of Typhoon Lionrock from the Associated Press.