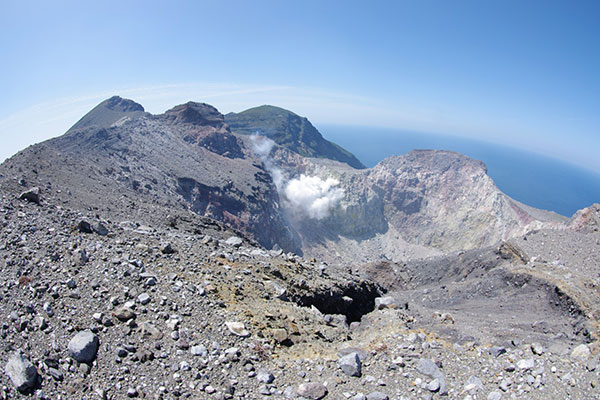 A photo taken from the volcano on Kuchino-erabu island. Photo courtesy: WMC

KAGOSHIMA – A once-dormant volcano on the island of Kuchinoerabu island erupted in the early hours of May 29th forcing residents of the small to evacuate.

All 137 people living on the island have been moved to Yakushima, another island town located 12 k.m. away. A number of the evacuees are staying at public facilities while awaiting news about the eruption.

Black smoke billowed from volcano in Kuchinoerabu island and reached 9000 metres into the sky as the pyroclastic flow ran down the mountain.

According to the Japanese Meteorological Agency, this eruption has been classified as a level 5. In contrast the Hakone eruption that occurred in early May was a level 2, which allows residents to remain in the area.

Fortunately, no one has been injured.

One Twitter user posted the image below taken from an airplane far above the volcanic eruption. There are also webcams that are placed near to the volcano that are watching its progress.

This is a first time a level 5 eruption warning has officially been announced since 2006. The last major eruptions that Kuchinoerabu island experienced was in 1933 and 1966.

Kyushu is an area well-known for hot springs, and there are some active volcanoes in there area like the one in Hakone.

To the north about 130 k.m. far from Kuchinoerabu island, there is another very active volcano named Sakura island. In the past few years, there have been over 1000 eruptions, which is an unusually high amount.

And also in 2011, Mount Shinmoe, which is located in the same area, erupted as well.

At the same time, the raising smoke could be seen as far away as Ontake, which is about 300 k.m. away.

According to some specialists of volcanology, it’s unclear when an eruption on Kuchinoerabu-jima is likely to happen again.