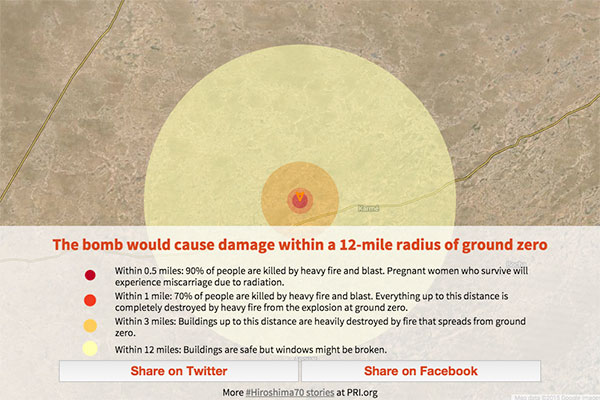 An atomic bomb can be felt up to 12 miles away from the epicentre and its radiation lingers. Image: Screenshot

On August 6, 1945 an atomic bomb was dropped in Hiroshima, Japan and 70 years later the reverberations of the blast can still be felt by thousands of Japanese survivors.

With a blast radius of 12 miles, or 19.3 kilometres, it consumed the small town and left almost nothing standing close to its epicentre.

A website hosted by Public Radio International gives users the ability to drop a bomb on their hometown and gives a sense of the destruction faced by the people of Hiroshima in 1945.

From Toronto City Hall up to College Subway Station and down to Front Street would be completely obliterated. Within 1 mile of the blast 70 per cent of people are dead and buildings are destroyed.

It is a chilling experience, but brings a certain reality to the real event that took place over 70 years ago.