WePress: A collaborative effort by six artists opens up a makerspace for Vancouverites 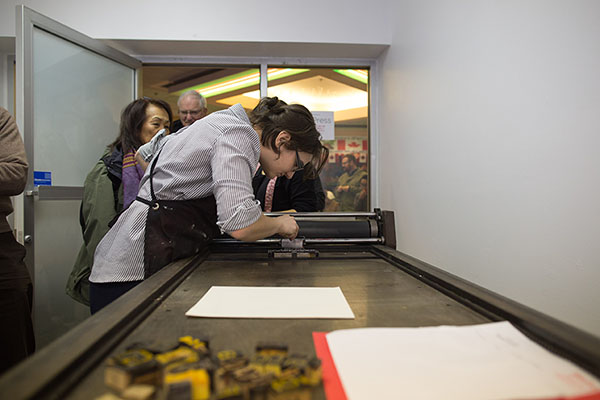 Cara Seccafien, a member of the WePress collective, gives a demonstration of the letterpress showing off some of the tools available at the makerspace.

VANCOUVER — A collective of six artists and community organizers are combining old and new technology in a new makerspace in Vancouver’s Chinatown.

WePress opened its doors on February 8 to more than 100 people who wanted to see its letterpress and 3D printer in action.

“It’s exciting to mix the old and the new,” Chris Gilpin, executive director of the Community Arts Council of Vancouver (CACV), said. “But what I think is unique about WePress is that it’s really community-oriented. It’s all about providing accessibility to people who might not have the money to rent a laser or 3D printer.”

The collective has also added an industrial sewing machine to the makerspace.

The space will be used for workshops and to provide printing services, as well as to showcase and sell local artwork and publications, some produced in the space itself. 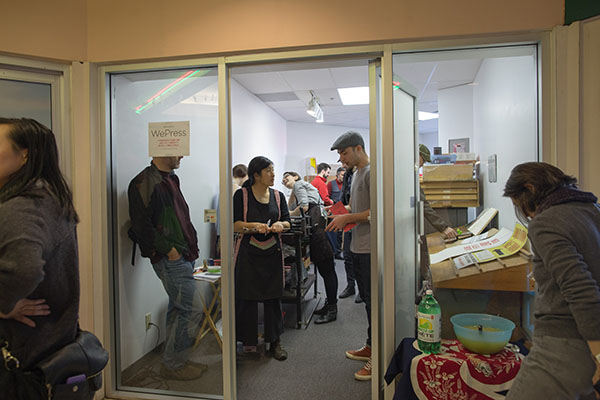 Candie Tanaka, a member of the collective, said that women, for example, are often underrepresented in the technology industry and WePress could open up technology to them. Workshops like the one held before the launch of the space allowed local residents to learn about virtual reality, a three-dimensional simulation that can be explored through computer technology.

“For other workshops, we’re open to ideas,” Gilpin and Tanaka said. During the WePress opening, Tanaka said a few people already approached them about ideas for their own workshops to host.

Workshops are how the makerspace will typically operate; however, their February open house allowed visitors to interact with the space and ask questions.

“This place taught me something new,” Jacklin Maher, a graphic artist, said. “The 3D printer caught my attention . . . I learned I can transfer [designs] to the machine.”

Maher has only ever created her work on paper. She was excited to watch the 3D printer create tangible objects out of polylactic acid, a biodegradable plastic.

For Baldwin Hum, a local architect, he was curious to see what combining all three technologies could produce. But he was particularly interested in the letterpress, a piece of equipment on loan from the CACV.

Some of the space’s type that can be used for the letterpress is from Chinatown.

Members of the WePress collective own a set of Chinese type from Ho Sun Hing Print Shop – the oldest Chinese-Canadian print shop, which closed in Chinatown in early 2014. The shop originally opened in 1908.

A “chance encounter” on learning about the type was the spark for WePress, said collective member Kathy Shimizu.
In October 2013, Shimizu and Michele Smith, another member of WePress, came across artist Lydia Kwa’s book, linguistic tantrums, that included images made with other type from Ho Sun Hing.

“A visit to the Ho Sun Hing Print Shop and many conversations and emails later, we had a large group of diverse people coming together as the Ho Sun Hing Project,” Shimizu said. “[We] raised enough money to purchase one set of Chinese type – over 8,000 characters – from the shop.”

Eventually, the Ho Sun Hing Project morphed into a group of people trying to find a space where the community could use both the letterpress and type.

“Throughout 2014 and 2015, a small group of people continued to meet, move the press, write grants, and thanks to [Tanaka], find a space in Chinatown where we now reside,” Shimizu said.
The Vancouver Foundation, a foundation that supports various communities across BC, currently funds WePress.

The collective paired with the CACV to receive the funding, which ends in July.

It’s still too early to know what will happen to the space next but Gilpin said they would likely apply for other grants and look at other ways of funding that could include receiving donations to keep the space open.

Gilpin said the collective might organize a second open house to bring more community members into the space.

A makerspace is a place where people get together to create, invent and learn, and to learn more about WePress workshops and events, visit www.wepress.ca.