‘When I Was Most Beautiful’, a film 30 years in the making 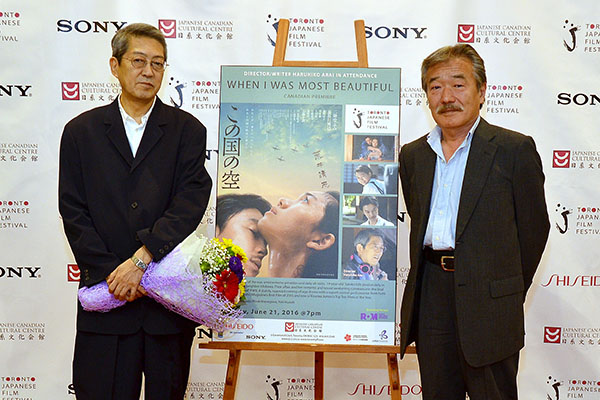 ‘When I Was Most Beautiful’ director Haruhiko Arai, left, and producer Akira Morishige, right, at the screening of the film. Photo credit: Leon Balaban.

A war film without death was a challenging sell for producers.

Haruhiko Arai is an award winning Japanese screenwriter, director and editor of Eiga Geijutsu magazine, who has worked in Japan’s independent film industry since the 1970s. It took Arai 30 years to make When I Was Most Beautiful, which is only the second film he has directed after 1997’s Body and Soul.

When I Was Most Beautiful follows a teenage girl named Satoko during World War II, who is having an affair with an older married man who did not go to war because he failed his physical examination.

Arai was in Toronto for the Toronto Japanese Film Festival at the Japanese Canadian Cultural Centre, where Nikkei Voice sat down with Arai to talk about the film. The following has been transcribed from a translation.

Nikkei Voice: It took you 30 years to adapt Yuichi Takai’s novel, This Country’s Sky into a film. Why did it take so long and how much work did that entail?

Harukiko Arai: Nobody wanted to put money into making this film, because they didn’t think the film would make any money.

NV: Why wouldn’t it make any money?

HA: Yes it is a war film, but nobody dies and for that kind of a war film, nobody will come and see it. It’s too quiet for a war piece, that’s why people didn’t want to produce it or put money into making it.

NV: Does the fact that no one dies in the movie really set it apart from other Japanese war films?

HA: Japanese war films used to be depicted from the point of view of the victim. So they get bombed, these kinds of films [emphasize] that we were the victims.

NV: The film’s screenplay was also inspired by a 1958 poem by Ibaragi Noriko called ‘When I Was Most Beautiful’. How does this poem relate to This Country’s Sky and did you decide to use the two in tandem to make this film?

HA: Noriko Ibaragi wrote the poem about 10 years after the war, but she was writing about her when she was 19, 10 years later… In 1945 the poet was 19 and she wrote the poem When I Was Most Beautiful. The main character of this film is also 19 in 1945, so I found the relationship [important]. That is why I used the poem instead of music in the last scene. Also, the poet wrote the poem 10 years after the war, but she was still angry about he fact that she was 19 and beautiful and nothing happened when she is looking back at the past. The film doesn’t depict what happens after the war, and what happens to her, but I think the character probably feels the same after the war [as the poet]. She was probably angry at her experience for not having experiences. I think the poet and the character probably felt the same way and had the same experience.

NV: You have had a long and successful career as a screenwriter and filmmaker, but this is only the second movie that you have directed. How does directing compare to screenwriting in your opinion?

HA: It is very different. When I directed this film I got cancer. I have lung cancer and I had the surgery about three months ago.

When I am just writing a script, if the movie doesn’t work out I can blame it on the actors and director, but I cannot do that when I write and direct. All the responsibility comes to me.

As a joke I said, I wasn’t born during the war, but really my father went to WWII and then I was born. The cameraman and I were the same age and the rest of the crew was younger than us. It’s harder to make a war film today because the new generation is so young and they don’t know the war.

NV: What was the reaction to the film like in Japan?

HA: The newspaper and media really liked the film, but the box office made about 50 million yen, so maybe around 50,000 people or less came to see it in theatres.

When I was reading people’s criticism on the Internet, especially from young people, they were commenting things like ‘this film doesn’t depict the misery of war or how horrible the war was.’ People have a stereotypical image of a war, including adults because the only people who experienced the war are over 80, so there are not too many people in Japan who have actually experienced the war. But the image of the war was that people couldn’t eat, people were dying, things like that. The young generation’s comments were like ‘could people eat that much food during the war’ because there are actually a lot of eating scenes in the film and also ‘could people have an affair during the war? Could people have sex during the war?’ that kind of comments and reaction from the audience. I wonder what kind of other war films would give them these images and ideas about the war.