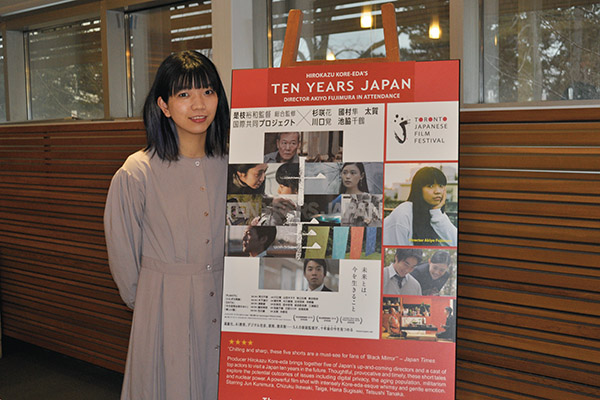 
Akiyo Fujimura with the poster for Ten Years Japan before introducing the film at the Japanese Canadian Cultural Centre in Toronto on March 14.

The film is composed of five short films from young, up-and-coming directors. The stories were curated and produced by award-winning and Oscar-nominated director Hirokazu Kore-eda. Each director was given only one guideline; that the story take place in Japan, 10 years in the future.

The five directors explored current anxieties in the nations’ psyche, but dialed up to the extreme, from the growing aging population, to the power of artificial intelligence, conformity, militarism and nuclear power. Each story is a warning of the real, underlining problems that could await Japanese society in the future. One of the films’ five directors, Akiyo Fujimura, was in Toronto to introduce the film and answer questions during a screening at the JCCC on March 14. Fujimura sat down with Nikkei Voice before the screening and with a translator, spoke about the inspiration behind the film and working with legendary director Kore-eda. 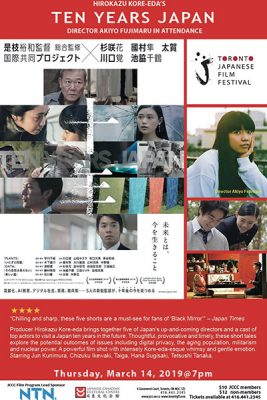 Fujimura’s contribution to Ten Years Japan is her short film, In the Air We Can’t See. Her film stands out from the rest, telling the story of a post-apocalyptic Japan. After a nuclear disaster, the air becomes so toxic that the surviving population is forced to go underground and rebuild their lives below the city. When writing the script, Fujimura considered the most influential events in the last 10 years of Japan. For Fujimura, that was the 2011 Tohoku earthquake, and the Fukushima nuclear power plant disaster that followed.

“That kind of changed my values,” says Fujimura. “Also because of the accident with the nuclear power plant, I was scared of the air in Japan.”

In Fujimura’s film, she focuses on 10 year old Mizuki, who has lived her entire life underground, and grows more and more curious of the life above. She is torn between her older friend, who longs for the world above ground, and her mother who teaches her to fear anything that has come from it. With playful animations and a music, the film emphasizes through the eyes of a child, the beauty of nature and its importance on everyday life. While the topics in all the films are quite dark and foreboding, Fujimura says the message of her story is one of hope for a brighter future through the resilient nature of children.

“I don’t want people to get depressed or make them nervous, I was actually hoping for a brighter future,” says Fujimura. “I want younger generations to think more and I want to give them an opportunity to make them think about the future.”

Working on a film produced by Kore-eda was a valuable opportunity, explains Fujimura. Watching and being a fan of Kore-eda’s films since junior high, Fujimura was able to learn from him and get priceless feedback on her work. Established and well-known actors were more willing to work with the young directors because of Kore-eda’s stature, and as well it drew audiences in to see the film.

“This film was released right after [Kore-eda’s film] Shoplifters won the Palme D’or at the Cannes film festival, so some people told me they came to see the film because it is produced by Kore-eda,” says Fujimura. “So there’s name value and people paid attention because of him, so it gave us a very important chance.”

This was the 28 year old director’s second film, in what looks to be a promising career.

“When I made the film I never thought I would travel this far with it,” she says.