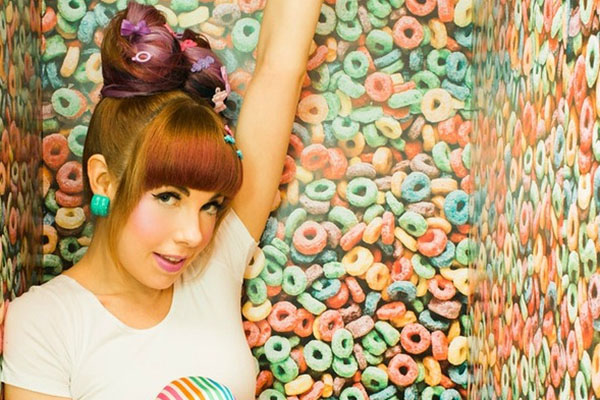 Pop artist Clara Venice will be headlining her own tour and leading music workshops in Tokyo. Photo credit: Katherine Holland.

For Venice, who wears Hello Kitty tights, flower crowns and pastel-coloured wigs this is a dream come true. She says her love for all things kawaii first started with a magazine her mother brought back from a visit to Japan.

“It was so different from magazines and fashion we have here and I fell in love,” Venice says in an interview with Nikkei Voice.

Venice, who is from Toronto, will be jetting off to Tokyo to headline her own tour from Aug. 12th to 20th. Venice’s tour is partnered with an art exhibit called ‘Power to the People’ being shown at Earth Plus Art and Cafe in Tokyo. The exhibit was originally shown in Tohoku Electric Power Green Plaza in Sendai, Japan. It was meant to show alternative forms of power in response to the aftermath of the Fukushima Daiichi disaster after the March 2011 earthquake. Venice also provided her music for “Ashita: Artists for Japan”, along with other Toronto-based artists – of either Japanese descent or a strong interest in Japanese culture – partnered with the Japanese Canadian Cultural Centre to raise $10,000 for earthquake relief. 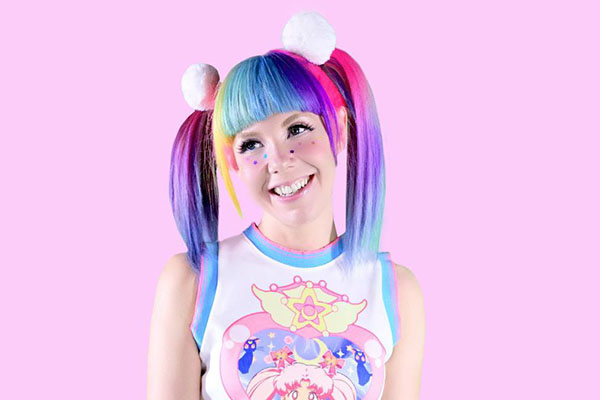 On Venice’s latest album, she plays 72 different instruments herself, such as the guitar, ukulele, glockenspiel and theremin. Photo courtesy: Emily Buller.

Helping Venice travel to Japan is a Japanese-Canadian communication agency called Creator’s Lounge. The agency’s founder, Kato ‘Tom’ Toyonori created the organization to introduce Canadians to Japanese artists and vice versa. There’s “not a strong promotion for artists, that’s why I like to help,” says Toyonori in an interview with the Nikkei Voice.

Toyonori, who was born in Japan, points out that there is not a lot of support or promotion for artists in Japan, so he wanted to create a place where artists and creators could come together and share their skills. Creator’s Lounge also tries to find Canadian artists who embody Japanese culture and would appeal to a Japanese audience, like Venice, says Toyonori.

“Being based in Canada we have a brand new perspective of Japan. And with our expertise about that country, obviously dear to my heart, we can more efficiently promote abroad about its values and culture in an authentic way,” said Toyonori in an interview with Tasai website.

“Definitely, in terms of looks I am very inspired by Japanese fashion,” says Venice. “I stand out very much in Canada. I’m just really excited to be in a place where people dress like me”

Just like her style, Venice’s instrument of choice, the theremin, while fairly unknown and unfamiliar in Canada, it is quite popular in Japan.

The theremin is one of the first electronic instruments, created by Russian inventor Leon Theremin. It is also one of the only instrument that is played without touching the instrument. Instead, the theremin has two antennas, one that controls pitch and the other controls volume, says Venice. Sound is created by moving hands close to and away from the antennas. The result is a strange and chilling yet lovely, echoey and electronic sound. Along with the art exhibit and musical shows, Venice says she will be doing a theremin workshop in Tokyo.

The theremin has quite a large following in Japan, the Guinness World Record for largest theremin ensemble was set in Hamamatsu, Shizuoka-prefecture. Dressed all in black, 272 musicians played an eery, yet recognizable rendition of ‘Amazing Grace’. The musicians played a variation of the theremin, called a matryomin. The instrument is a small, single antenna theremin placed in the body of an empty Russian Nesting doll, or a matryoshka doll, invented by Japanese thereminist, Masami Takeuchi. The unique instrument is number one on Venice’s shopping list for Japan, she laughs.

The sound of the theremin is most recognizable to North Americans as a sci-fi special effects sound or the strange electronic sound in the Beach Boys’ ‘Good Vibrations’.

It’s a “big challenge because it’s never used in pop music, how can I do this in a way that doesn’t scare people,” says Venice. “I’ve never been in it to alienate people, especially now with what’s going on in the world, we need beautiful things – what’s wrong with beautiful things?” 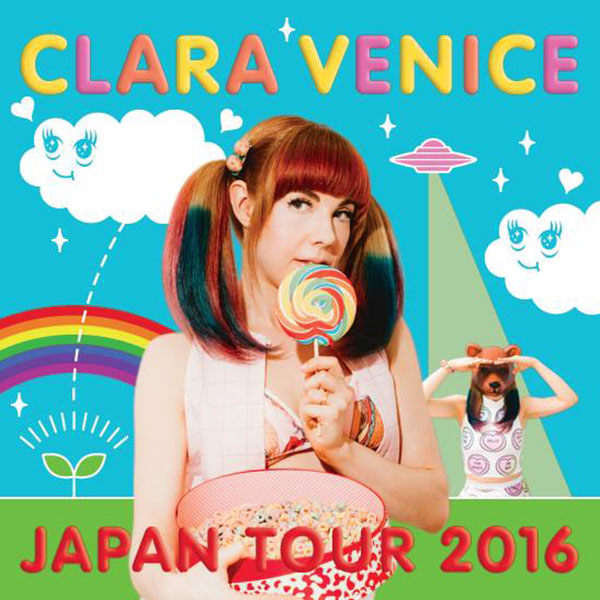 This will be Venice’s first time travelling to Japan, a long-time dream of hers. Photo courtesy: Ken Ogawa.

Venice mixes the ethereal sound of the theremin with the sounds of 72 different instruments like the guitar, ukulele, electric violin and glockenspiel – all of which she plays herself – to create love songs on her latest EP, Electronic Dream. The result is an infectious, fun pop sound.

Venice will be performing at Time Out Cafe and Diner in Tokyo, which will be here first time travelling to the country.

“It’s just going to be an adventure, everything I see, even if I’m lost, is going to be amazing,” says Venice.


[…] works on display at the gallery, Takeya included a whimsical painting of electronic pop artist Clara Venice, as a purple-haired mermaid riding the world’s biggest squid. Its deliberately garish and vibrant […]