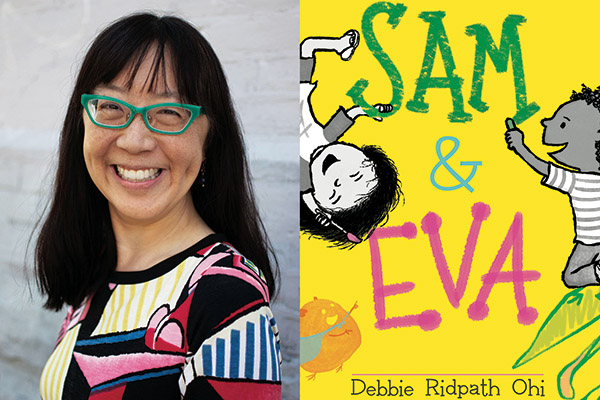 TORONTO — Debbie Ridpath Ohi is the author and illustrator of two children’s books, Where Are My Books? and Sam & Eva, and has helped create nearly 25 books for young people, working with authors like Judy Blume, Michael Ian Black, and Aaron Reynolds.

Her books have been awarded or shortlisted for numerous major book prizes, including the New York Times Notable Children’s Book and Missouri Building Block Picture Book Award and have also been featured on The Late Show With Stephen Colbert, Late Night With Seth Meyers and NBC’s Today Show.

Depending on the book project, her illustration process has included both digital and non-digital techniques. Her upcoming picture book projects include illustrations using found objects like crayons and fresh produce.

Debbie’s books have been published in English, French, Japanese, Spanish, Chinese and Korean. Debbie lives in Toronto, with her husband Jeff, where Nikkei Voice interviewed her over Zoom.

Nikkei Voice: What was the impetus for quitting your job as systems programmer/analyst for TD Bank and pursuing writing/illustrating full time?

Debbie Ridpath Ohi: I have always wanted to be a writer, but never imagined I would be able to make a living at it. Because the arts didn’t seem to be an option for me, therefore, I pursued a career with a more reliable income. I am also a tech-geek at heart, and always enjoyed programming, so it wasn’t like anyone was forcing me to pursue programming.

Hoping that a change might help, I tried transferring within the company to Human Resources, but was turned down. I was living with my boyfriend, Jeff, and he saw how miserable I was. The money was good, but I was enjoying my work less and less. Jeff convinced me to quit my job, saying he would support me so I could pursue my creative dreams. I owe him big-time! 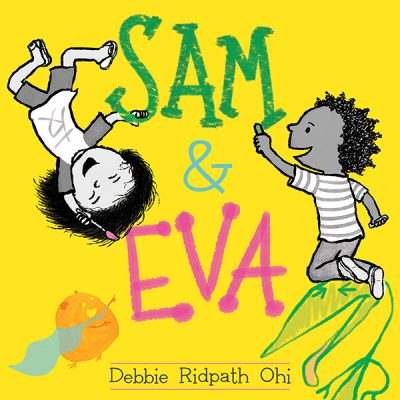 What is your favourite book you’ve written/illustrated?

Sam & Eva is the favourite picture book that I’ve both written and illustrated. It was a story that just poured out of me, and I had such a fun time working on it. Eva is Japanese, and it’s been fun to see kids learning how to write the kanji character for “tomo/friend” in classrooms. I’m not fluent in Japanese myself—though I’ve tried to learn—so I asked some Japanese friends for help. It’s a story about creative collaboration and friendship, and it makes me happy. Also happy to be working on a sequel for Simon & Schuster, which is slated for publication in 2022.

What do you prefer, writing or illustrating? What are the challenges or joys of each?

Such a hard question to answer! Both are so different, yet both have been my passions since I was little. I’ve always loved to write and have wanted to be a writer for as long as I can remember. I got my agent (Ginger Knowlton at Curtis Brown) because of my middle grade writing. I put my middle grade writing on hold to focus on picture books, but have recently ramped up my work on middle grade again. So many of my in-person events have been cancelled this year because of the pandemic, and one of my book projects has also been postponed until next year, so I am using the extra time for my writing.

Although I’ve always enjoyed making art, I never considered myself that good, at least not in comparison to the professionals. However, I’ve been working hard at improving my craft over the years, and have also had a ton of help from the people I work with. As for which I prefer, writing or illustrating, I love both! And my biggest joy? Seeing my books in the hands of young readers.

Did you have a favourite children’s book or author growing up?

One of my favourite authors growing up was Ray Bradbury. His stories were so imaginative and helped get me hooked on science fiction. I was never able to meet him in person, sadly, but was thrilled when he wrote back to me when I sent him a fan letter and a self-addressed-stamped envelope.

I was also a fan of Japanese mythology, though I didn’t have a particular book or author that was a favourite. My mother’s first language was Japanese, not English, and instead of reading me bedtime stories at night she would tell me Japanese fairy tales. One of my favourites was the story of a fisherman who thought he was visiting an underwater kingdom for a day but when he returned home, he discovered that hundreds of years had passed, and everyone he knew was dead. It fascinated and horrified me, and I asked for this story over and over. 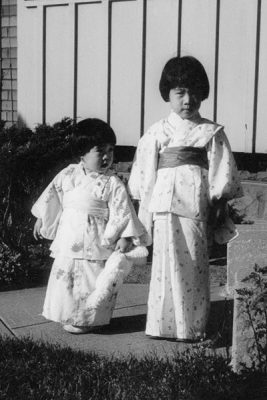 Who is your favourite author now (adult or children’s)?

My favourite author and illustrator is my sister, Ruth Ohi. Not just because she’s my sister, but also because I am a huge admirer of her work and work ethic.

What is your relationship with your sister, Ruth Ohi? Have you ever collaborated with her?

My sister and I are very close, much closer than we were when we were growing up. Part of this is because of family losses (our mother, our younger brother); we grew closer as we supported each other as well as our father. We support each other in our careers, exchange advice and encouragement.

I remember when I was working on illustrating my very first children’s book, I’M BORED, I constantly felt out of my depth, went through major imposter syndrome. There was at least once or twice when I called her in tears, saying I didn’t know if I could do what was being asked of me, asking for her help. Ruth always said yes, always had words of encouragement. I would be a basket case by now were it not for her.

And YES, we would love to collaborate together! In fact, I am currently working on writing a picture book that I hope she will illustrate. I say “hope” because I am not taking her for granted. I’m working very hard on the story, polishing it as best I can before showing her. Then it will depend on her schedule and if she thinks she’s the right illustrator. We’re both treating this as a professional collaboration, not just a sister collaboration; we’re both more likely to enjoy the process that way. 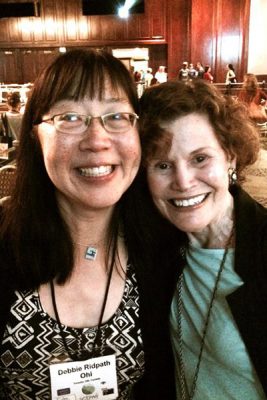 How much interaction/collaboration did you have with Judy Blume when you worked on her covers for the reissue of her books?

I never had any direct interaction with Judy during my illustration process, at least not in terms of feedback—that always came through my art director on the project, Lauren Rille. However, Judy did tweet at me a couple of times during the process about how much she was enjoying my art so far. I remember the first time it happened. I immediately texted my husband, “JUDY BLUME TWEETED AT ME!!!!!” I printed out some of her tweets, and they’re still up on my Inspiration Board in my basement office because they make me happy.

How has being Japanese Canadian impacted you and/or your work?

Especially during the pandemic, I am more aware of looking East Asian. It’s the first time since I moved to Toronto (since around 1986) that I sometimes felt like an outsider. Some examples: Before social distancing I was on the Toronto subway during rush hour. People were packed shoulder-to-shoulder, and I felt lucky to have snagged one of the few seats early on. There was an empty seat beside me, and I kept expecting someone to grab it….but no one did. Next station stop, no one sat beside. Another two stops. By this time, I couldn’t help but wonder if it was because I looked East Asian, and people were worried about catching the COVID from me. After four stops, an older East Asian-looking woman got on our subway car, pushed her way through the crowd, and took the empty seat beside me.

Just a couple of weeks ago, I was walking home from the grocery store in our neighbourhood when a car slowed and the driver stuck his hand out the window and gave me the finger, then sped up again. I was stunned. What was I doing wrong? I was on the sidewalk. I was wearing a mask. And the first thing that popped into my head was: it’s because I look Asian and he blames me for the pandemic.

I’m trying very hard not to default to this way of thinking. I love Toronto and have never encountered any kind of racism before the pandemic. I try to convince myself that examples like the above were just coincidences, that there were other reasons. I confess it has made me more wary when I’m out and about, and also a bit sad. But on the positive side, it has made me even more motivated to help create picture books that embrace diversity. I do continue to feel very lucky to live in Toronto, which is such a melting pot of cultures and lifestyles and backgrounds. 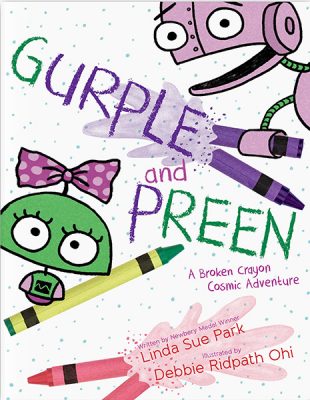 How has COVID-19 impacted your work/life?

I found it nearly impossible to focus on creative work at the beginning of the pandemic. I was too worried about loved ones and about the future. All my in-person visits were cancelled, including any school visits, literacy festivals and my book tour for GURPLE AND PREEN: A BROKEN CRAYON COSMIC ADVENTURE (written by Linda Sue Park, illustrated by me, coming out from Simon & Schuster Aug. 25, 2020).

I know some people out there think it shouldn’t be much of a change for me, since I’ve always worked from home. That may be true for some people, but I found I was spending a lot more time in virtual meetings and attending virtual events.

What does a typical working day look like for you?

I try to reserve early morning for working on my middle grade writing. I do this because once the day starts, I tend to get too distracted by all the things on my To Do list. My middle grade always used to take the back burner to contracted projects but I am determined to get back to it.

While I will alway want to write and illustrate picture books, I am yearning more and more to work on middle grade books. There’s no guarantee they will ever be published of course, but I want to at least get some finished and sent out.

How or from where do you get your ideas?

From everywhere and everyone, really. I remember I used to ask authors and illustrators this question when I was just starting out, and would be a bit impatient at their vague answers. But now I better understand that it’s often the truth.

I keep paper and digital notes with ideas for new books. My challenge is always that I have too many ideas (I want to do board books, picture books, chapter books, middle grade, maybe eventually some for young adult and adult).

What I do: collect ideas and then revisit them every so often to see what I’m still excited about. I also find that sometimes the same themes and topics worm their way into my head, and that’s a good indication that maybe there’s something there.

Another piece of advice I have for others seeking ideas: improve your listening and observation skills. Learn how to fade into the background, how to really look at the things and people around you.

Find out more about Debbie Ridpath Ohi’s books as well as what she’s working on now at DebbieOhi.com as well as on twitter @inkyelbows, Instagram @inkygirl and Youtube @debbieohi.