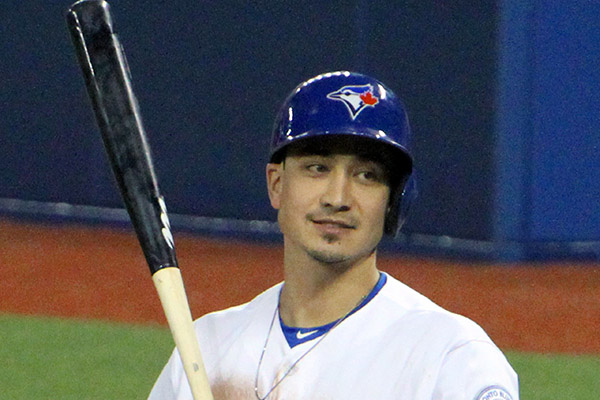 Darwin Barney may not be as noticeable as Munenori Kawasaki whose antics boosted the Blue Jays during a dire season in 2013, but he has a presence on the field and the skills to boot as an infielder and shortstop. Photo by: Jon Eto

I’m writing this column on May 24th—the day after this year’s official Victoria Day and the June issue’s deadline. The Raptors made us supremely happy last night, tying the Cleveland Cavaliers two games each in the National Basketball Association’s Eastern Conference Playoffs.

By the time you read this, after this Nikkei Voice issue has been put together and sent onto you, the Raptors’ situation may have changed. But no matter what happens in the immediate future, to fans like me, the Toronto team is what professional hoop ball is about. Yea, We the North!

While following the Raptors doing so well, we baseball fans have also kept an eye on the early weeks of the Blue Jays 2016 season. That means when the games overlapped on TV, our remotes behaved at their best.

Anyway, when the Raps have ended their playoffs, we’ll have Jose Bautista and gang to concentrate on.They play many more games each season than basketballers do, so they have more bench warmers, too.

For us Nikkei, in addition to the Jays sluggers, for several seasons we had Munenori Kawasaki to look forward to. The Kagoshima-born infielder was not only a good second baseman, but a great baserunner. Plus the characteristic that made him so popular with Jays’ fans was his unusual personality.

Unlike most made-in- Japan players who perform seriously on major-league teams, Munenori is a happy clown. So even when he was on the bench, the TV camera would swoop on him to see what he was doing to cheer on the Jays.

When Kawasaki was traded last season to the Chicago Cubs, there was a real sense of loss felt by many of us. Then last September, the Jays got another backup infielder from the Los Angeles Dodgers, named Darwin Barney. But so much else was going on, most of us didn’t notice his presence until this year.

Barney has dark hair and good looks. And his fielding replacing Ryan Goins was OK, and what’s more in most games he got one or two hits.

I didn’t notice him particularly at first, just concentrating on the ups and downs of the Donaldson-Bautista-Encarcion trio. Then Darwin Barney hit his second Jays homer on May 20th. Not only that, his average was up in the .300s among the top few on the team.

Who is this guy? Googling his name, I discovered that he was described as one-quarter Japanese, one-quarter Korean, and the other half of Hawaiian descent. The Japanese and Korean came from his mother Doreen—whose father was Japanese and mother Korean. While his father David Patrick Barney was born in Hawaii but was Caucasian.

Jays infielder Darwin Barney was born and grew up in Oregon. When I was pursuing his Asianness whenever he played in a game shown on TV, it was only when he looked straight at the camera that his Asian part could be detected by me. At other angles, as he walked from the dugout to the batter’s box or moved around the infield, his face reflected his Caucasian side.

Anyway, at least we have a Blue Jay who is part Japanese and Korean. He may not be constantly noticeable like Munenori had been, but he seems to be a good player to have on the bench.

The only concern is that there are other contenders that John Gibbons uses for the backup second baseman’s spot, so Darwin Barney’s future as a Jay is hardly guaranteed.

Oh well, we have to deal with what we can.

By the way, in my Googling online to get facts about both Munenori Kawasaki and Darwin Barney, the records said the following:

That Kawasaki—who we always thought was a little guy—was 5 feet 11 inches in height (big surprise to me, and I assume to you) and 175 pounds (ditto) in weight.

Those professional baseball uniforms sure camouflage the truth. Or Google fact-collectors do.