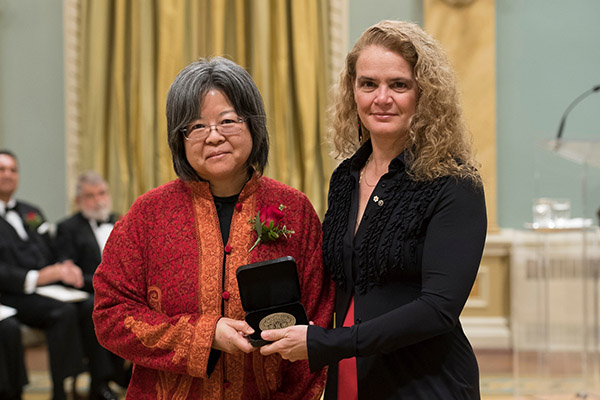 OTTAWA — Moving image artist Midi Onodera‘s relationship with film began at young age. Sneaking out of her room and down the stairs in the middle of the night while her parents slept, she would watch all of the classics on TV, with the volume as low as possible. In a dark room lit only by the TV screen, she fell in love with the moving picture on the screen.

“For some reason I have always been attracted to the moving image, the flickering screen,” Onodera tells Nikkei Voice during an interview in her Toronto studio. “And I just fell in love with movies.”

She watched all of the classics at night, her favourite was What ever happened to baby Jane?, the 1962 American psychological thriller starring Bette Davis and Joan Crawford.

From this love of film grew a 30 year, critically-acclaimed film career that Onodera was recognized for with the 2018 Governor General’s Media and Visual Arts Award. She was one of eight Canadian artists honoured with the award recognizing lifetime achievements in the fine arts. 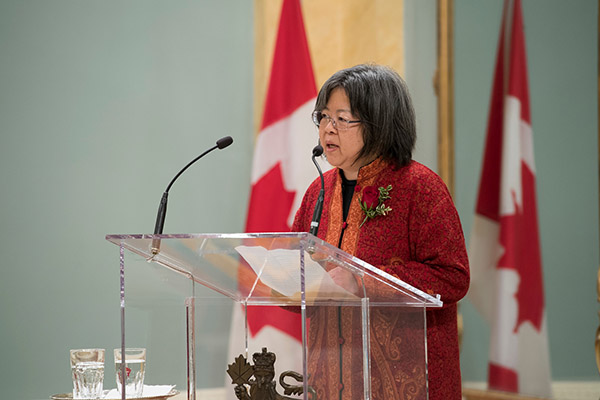 During a ceremony at Rideau Hall in Ottawa, Onodera received the award from Governor General of Canada Julie Payette, on March 28. The following day, an exhibition featuring a selection of each of the honourees work was opened at the National Gallery of Canada in Ottawa. Each of the recognized artists were chosen by a jury of their peers, members of the Canadian arts community.

“The nomination process in itself is quite arduous, so it was quite an honour to even be nominated,” says Onodera. “I was quite surprised when I got called and very honoured.”

Onodera was nominated by Tanya Mars, a performance artist, colleague and past winner of the award in 2008.

“Midi Onodera gained critical acclaim very early in her career with two remarkable films: Ten Cents a Dance (Parallax) (1985) and The Displaced View (1989) which launched her reputation as a thoughtful, daring filmmaker at a time when there was very little diversity in Canadian art,” Mars said about Onodera.

The award, created in 1999 by the Canada Council for the Arts and Governor General of Canada, is meant to celebrate Canada’s vibrant arts scene and highlight remarkable Canadian artists’ career achievements. The recipients receive a medallion and $25,000 cash prize, as well as a selection of their work displayed at the National Gallery in Ottawa.

This prize means survival as an artist, says Onodera.

“I think I will be able to hopefully put this into some work, but again, the life of an artist in 2018 Toronto is quite challenging; the cost of living keeps getting higher and higher,” she explains. “That whole world has completely changed, more and more of your audience expects to see your work online for free, so it’s very challenging to earn any money from your artwork, it’s not like a painting or sculpture, that you can sell.”

Much of her time as a filmmaker is spent applying for grants, contracts, looking for deals, and less time is spent actually getting to create art. To combat this, Onodera creates “vidoodles,” like a short little doodle you would draw on a piece of paper. They are short, little film experiments. 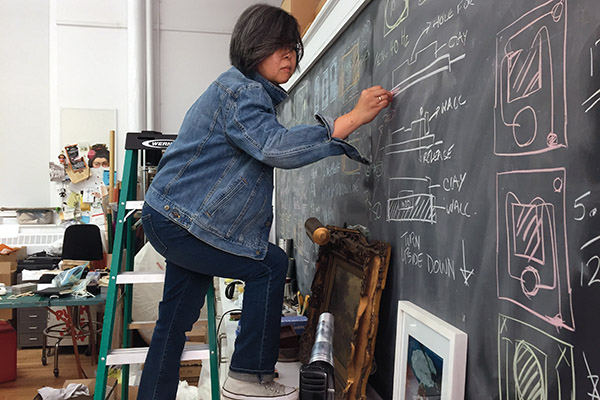 Midi in front of plans for an upcoming project at her studio in Toronto. Photo credit: Candy Pauker.

One of the films that launched Onodera’s career early on, and the film Mars highlighted in her nomination is The Displaced View. Onodera began working on the film between 1985 to ’86, when she was around 25 years old. Currently teaching courses at the University of Toronto Scarborough campus, to students around that age, she muses over her tenacity to take on such a daunting subject, and make a film loaded on so many levels, she says. The film explores internment, told through the voices of three generations of Japanese Canadian women in one family. It is a fictional film, but based on the true stories of her own family, and many others.

“My grandmother was still around at the time, but she was getting older,” she says. “I wanted to have her generation represented and I thought if I waited any longer, that generation would disappear. I felt there was no question, I just had to do it.”

Onodera, with the help of her cousin, interviewed families with three generations of Japanese Canadian women who were all willing to share their experiences surrounding internment. The film came out in 1988, the year of redress, but she began her work on the film two to three years before that, a time when many did not openly talk about internment.

“It felt like the right thing to do, in terms of getting that conversation started, because before redress, no one talked about the war,” she says. “I think that silence really overshadowed, certainly my childhood, and I think it is very similar for people in my generation.”

As she began the interviews, many of the generations of women were surprised at the stories that came out, and she could see the tensions between generations.

“It was a fascinating kind of exercise, because many of the Sansei would say, ‘I had no idea, you never told me this’,” Onodera remembers.

Onodera wrote the script, and casted herself, her grandmother and mother (but voiced over by another woman) in the film. The film is subtitled in Japanese, when she and her mother speak English, but when her grandmother speaks Japanese, there are no English subtitles. A deliberate decision, Onodera wanted audiences to understand the relationship she had with her grandmother. She didn’t speak English and Onodera did not speak Japanese, but they were still able to communicate.

“I wanted to replicate my own experience growing up, my grandmother was a huge part of my life growing up,” she says.  “I wanted to make my English speaking audience really concentrate on how the Japanese language is spoken and put themselves in my position, and make them really have to pay attention to her body language and facial expressions.”

The language of the Issei generation was made up of how Japanese was spoken when they left Japan in the early 1900s, with influences from Canadian culture and the English language, different from what is now spoken in Japan, explains Onodera. The film was a way to preserve that distinct Japanese Canadian language. The Displaced View continues to be shown today, in womens’ studies classes and schools across Canada. 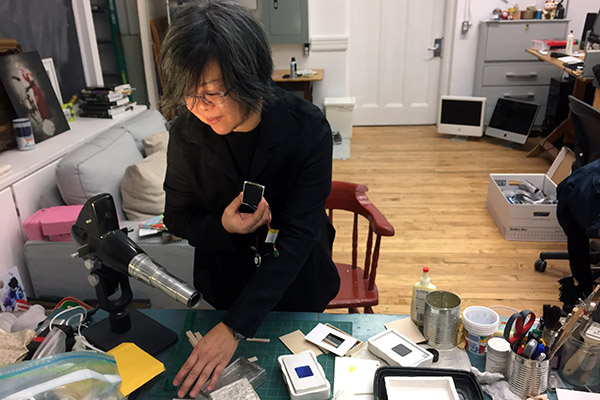 Midi working on her newest project in her studio in Toronto. Photo credit: Candy Pauker.

When Onodera began her film career, she says there was little diversity in the voices in film making.

“Being Asian, it was like a shock, it was like you were definitely operating in a sea of whiteness,” she says. When asked what kind of obstacles she faced, she replies, “I think you would have to write a book.”

As a young artist, she looked to artist Aiko Suzuki as inspiration. Towards the end of Aiko’s life, when she knew she had cancer, Onodera interviewed and filmed Aiko.

“I felt like she was so important to me and my desire to be an artist that I wanted to make sure that she was preserved in some way,” she says.

Just thinking about Aiko, her creativity, and her work ethic is inspiring, says Onodera. She makes me feel like a couch potato, she laughs. Aiko was one of the early artists to even entertain the notion that the essence of being who we are as Japanese Canadians is not rooted in internment, ideas that pushed her to experiment with her film making and push pasts expectations placed on her as a woman of colour, explains Onodera.

“I’m not a mainstream filmmaker, I don’t make conventional work, I understand there’s a place for that, but I’m not interested in that,” she says. “I’m more interested in asking questions and I guess highlighting things that might not be visible to people and asking my audience to think critically.”

A selection of Onodera’s work will be screened alongside work for other Governor General Arts Award honourees at the National Gallery in Ottawa from March 29 to Aug. 5. Included will be: Nuts, the basement girl, The Grand Design, The Displaced View, I have no memory of my direction and Grief Without Fantasy.