A reunion 75 years in the making 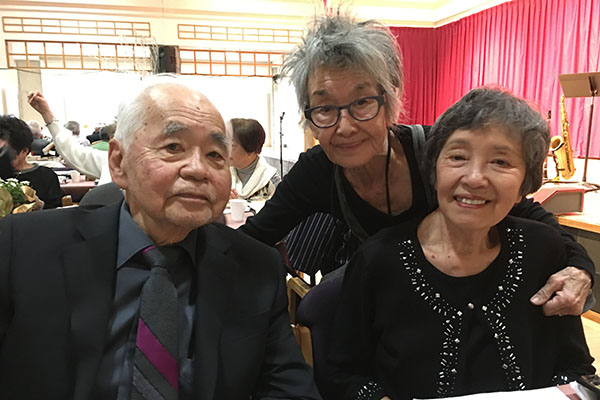 Last seeing each other 75 years ago, two Niseis look up to see each other across the table. Bill Kobayashi , JoAnne Maikawa and Donnie Shimotakahara, (Bill’s sister-in-law) at the special luncheon at Momiji Health Care Society. Photo credit: Judge Maryka Omatsu.

Along with 300 Niseis, I waited patiently in the hallways to attend the event to “honour” Japanese Canadians who had been interned or displaced 75 years ago.

It wasn’t a foot stomping, pushing crowd for the sold out event, since several attendees were using canes and walkers, whilst others were seated in wheelchairs.

From the sidelines, we could see the organizers, busily scrambling to set up the ticketbooth, book display, raffle, and meal tables.

Kudos and much appreciation to the NAJC Toronto Chapter volunteers who sponsored the lunch.

I hadn’t seen so many Niseis together since the heady days of the Redress fight and victory in the 1980s.  The silver-haired Niseis were humming with excitement and anticipation as they waited to get in. 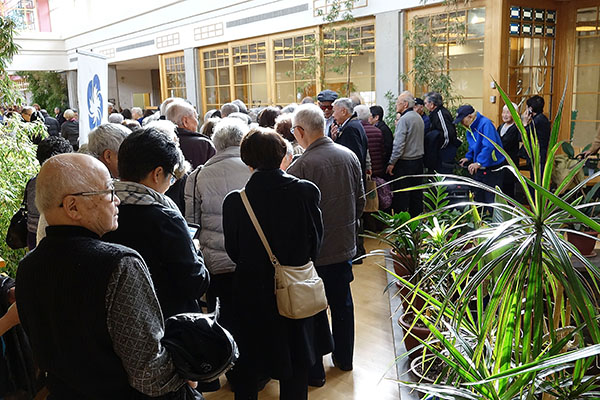 The lineup of eagar Niseis waiting to be seated for the special luncheon. Photo credit: Janet Sakauye.

I stood in line with Bill Kobayashi, 91 years-old and married to my Aunt Addie. Bill and Addie were stalwart activists during the Toronto Redress years. Bill’s claim to fame? He is the father of Canada’s iconoic tabletop hockey game that we Sansei kids spent many hours playing.

I managed to find places at a table for Bill and Addie and my friends, artist JoAnne Maikawa, 82, her husband, Dick Roman and son, Robin. JoAnne’s grandfather’s brother owned the Maikawa department store on Powell Street in Vancouver, and her grandfather owned the garage on Alexander Street and Gore Avenue, where my dad had his first job.

In the room Momiji had set aside as a pop up gallery of internment camp memorabilia, JoAnne had on display 2 art pieces, one of New Denver and the other about Angler, Ont.

A relative of JoAnne’s, Harold Shimoda, had been interned in Angler, which sparked JoAnne’s interest. Angler was a PoW camp, north of Thunder Bay, Ont., where Japanese Canadian dissenters were sent. In Angler, the inmates wore prisoner garb with a big red bulls’ eye on the back. The camp was surrounded by barbed wire and patrolled by guards armed with shotguns.

In addition to JoAnne’s art, the “Momiji gallery” was filled with photos and a video of other internment camp sites, provided by the Nikkei National Museum. 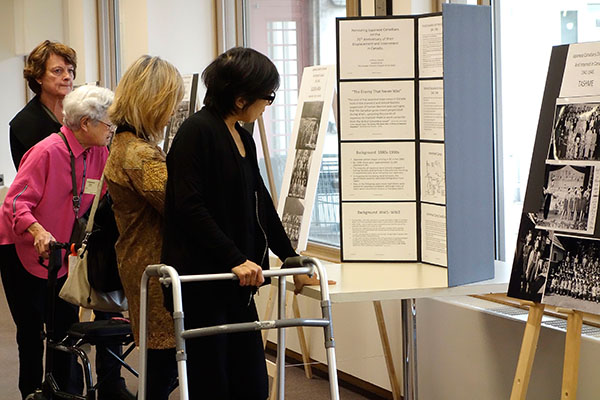 Attendees view the photos and history exhibits about internment camps put together for the special luncheon. Photo credit: Janet Sakauye.

After we were seated for our bento lunch catered by Toronto’s Sakawa Coffee, I introduced the folks at my table.

On hearing Bill’s name, Dick (JoAnne’s husband) ears perked up. He said that on the drive over, JoAnne had been reminiscing about a teenager, named Bill Kobayashi, who had left a lasting impression on her as a 7 year-old girl. And much to everyone’s surprise, there he was seated across the table.

Bill and JoAnne were shocked to rediscover one another. Seventy-five years had passed since those wartime days in the self-supporting community of Blind Bay on Shuswap Lake, 60 miles east of Kamloops.

The Canadian Government’s 100 Mile Exclusion Order of 1942 affected each and every Japanese Canadian living in the province. Almost overnight, Japanese Canadians were forced to move to road camps and ghost towns in the B.C. interior, leaving their homes, businesses and communities with little more than a suitcase.

The Kobayashi and Maikawa families were no exception. However what brought them to the remote village of Blind Bay is a story worth telling.

Knowing the Exclusion Order and seeing a business opportunity, lumber broker C.T. Coy got permission from the BC Security Commission for 10 Japanese Canadian families to build a sawmill in Blind Bay.

Coy planned to ship the milled lumber to other parts of B.C. and Canada.

My Kobayashi relatives and the Wakabayashi and Tasaka families were among those recruited to move to the interior.

The Nozaki’s (JoAnne’s mom’s family) and Maikawas had already moved to Blind Bay.  Since the 1920s, when JoAnne’s mom was a teenager, she and her brother Mitz had worked for Frank Panvini, owner of the popular Chapman chain of bowling alleys in Vancouver. There is still an alley on Granville. (It is said that Mitz and Frank invented 5-pin bowling).

Frank Panvini turned out to be a true friend. On learning of the evacuation order, Frank bought a farm in Blind Bay for the Nozaki and Maikawa families to live in. In 1943, when the Trustee of Enemy Property auctioned off Mitz’s family home in East Vancouver, Frank purchased it for his friend. In 1949, when the War Measures Act lapsed, Mitz had a house to return to.  When Frank died he left a bowling alley to Mitz.

On arriving in Blind Bay, the first order of business was to build the sawmill and cabins for their families.

Jack, another of Bill’s brothers, was the “fireman” who adapted a decommissioned steam locomotive engine to operate as a boiler for the mill and soon they were up and running.

However after a few months, the paycheques stopped coming in. There were many heated discussions about what to do. The men went on strike. Nothing happened. They planned a lawsuit.

JoAnne, a child at the time, overheard these exchanges and spied through a peephole in the lumber wall.

She witnessed the desperation of her family and the other sawmill families. The months dragged on and a hearing was eventually held in Kamloops before RCMP District Inspector Barber.

JoAnne accompanied her parents on the 60 mile trip to Kamloops. They were told that C.T. Coy had dispursed his assets amongst his family members and had declared bankruptcy.

The mill was closed and the men never saw a penny of their unpaid wages. To survive they sold the mountains of sawdust as winter fuel in Kamloops, picked up farm work where they could and relied on the generosity of others.

The winter of ’42 and the spring of ’43 were hard. The families subsisted on a diet largely of turnips and fought off sickness.

My Kobayashi relatives moved to Kamloops, B.C. In 1944, JoAnne’s family relocated to Toronto, at the invitation of Muriel Kitagawa.

Mitz (bowling alley) Nozaki remained in Blind Bay until 1949, when Japanese Canadians were finally given the rights of Canadian citizenship and could live on the west coast.

He returned, one of the lucky few, to his pre-war home in Vancouver. Bill followed his brother to Montreal just after the end of the war.