A tale of two countries bound by tragedy and heroism

Posted by Can Akalin 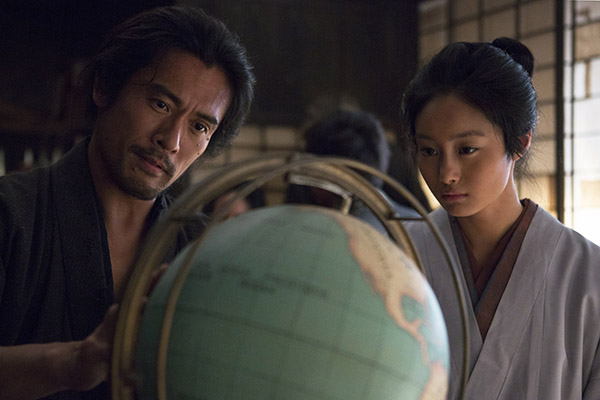 Seiyo Uchino and Shiori Kutsuna’s characters help save the crew of the Turkish frigate Ertugrul, which was caught up in a typhoon in 1890. The sacrifice of the Japanese fishing village would one day be repaid in Turkey.

Kainan 1890, last winter’s Japanese-Turkish blockbuster in Japan, will be premiering in Canada at the Toronto Japanese Film Festival on June 19. The film connects two real-life dramas, one in 1890 and the other in 1985, that deepened the friendship between Japan and Turkey.

The story of Kainan 1890 begins in Kushimoto, a town on the pacific coast of Japan’s Wakayama prefecture. In the night of 16 September 1890, the Turkish frigate “Ertuğrul” was caught up in a typhoon and sank off Kushimoto’s Kii Oshima island.

Risking their own lives, the locals were able to save 69 Turkish sailors. Although being very poor and having hardly to eat, the locals shared what little they had with strangers from a country 9,000 km away. In the following weeks donation campaigns for the Turkish crew started all over Japan.

The Ertuğrul story has created deep ties between Japan and Turkey especially in Kushimoto where this sincere friendship is always present. During local festivals Turkish folk dances are performed, couples have Turkish wedding ceremonies, and parents even give Turkish first names to their children, so it’s no wonder that it was the people of Kushimoto who wanted to make this film.

Kirk Kiyoharu Ura, president of Wakayama-based NPO Ertuğrul Saves the World explained in an interview, “We founded our NPO to make a film about the Ertuğrul story. We wanted to share our story with the whole world, show that friendship and peace between people and nations is possible, independent of borders, distance and time.”

The mayor of Kushimoto, Katsumasa Tashima, initially contacted director Mitsutoshi Tanaka (Ask this of Rikyu) in 2005 proposing to make a film about the Ertuğrul story. The project was finally funded in 2013 and shooting started in December 2014.

Except for some key roles, the Kushimoto locals are played by the people of Kushimoto themselves. Although not being professional actors, they couldn’t have been more convincing. Director Tanaka recalls a scene during which the Turkish sailors leave Kushimoto. When the director looked at the roughly 200 people waving good-bye to the sailors, every single one of them, although not in the script, was crying.

For his role as Dr. Motosada Tamura, virtuous actor Seiyo Uchino was nominated for Best Male Performance at this year’s Japanese Academy Awards. His faithful assistant Haru is played by shooting star actress Shioli Kutsuna, best known to Toronto audiences from her role in Unforgiven. In the wake of her life rescuing efforts Haru builds a special bond with Turkish officer Mustafa, played by cinema idol Kenan Ece.

In the second part of the film we are carried to the Iran-Iraq war.

In March 1985, Iraq announced an indiscriminate attack and the shooting of every commercial aircraft over Iranian air space. While every other country started evacuating their citizens, Japan did not send any rescue plane. 215 Japanese citizens were stuck in Tehran.

During a bombing raid Japanese teacher Harumi (Shioli Kutsuna) meets Turkish embassy staff Murat (Kenan Ece). As hopeless as the situation seems, Harumi does not want to give up on her students. Out of gratitude for the help from Japan in 1890, Turkish prime minister Turgut Özal decides to send another Turkish aircraft to Tehran and evacuate the Japanese. The remaining Turks at the airport still need to be convinced, as they won’t be able to board their own country’s evacuation flight. That’s when the Turkish embassy’s Murat starts speaking out to his fellow citizens about the compassion and kindness Japanese villagers had shown to Turkish sailors shipwrecked far away a long time ago.

Director Mitsutoshi Tanaka’s masterpiece was nominated for Japanese Academy Awards in 10 categories, including Best Film and Best Director, and won the awards for Best Sound and Best Art Direction.

Kainan 1890 is screening at the Toronto Japanese Film Festival on June 19.

Written by Can Akalin