A taste of Japanese junk food from Karinto to Calpico 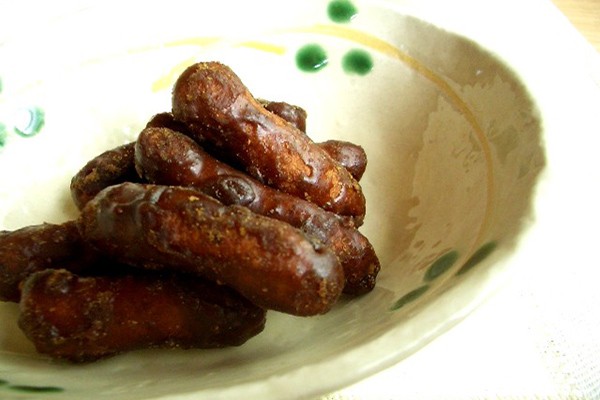 
Japanese snacks get a mixed rap, but they’re better than you think. Photo courtesy: WMC

I’m a junk food junkie. A snack-aholic. A sugar-and-salt addict. Nacho Cheese Doritos are a favourite, and so are Snickers bars. But those are typical American food obsessions. Because I was made in Japan, I also have some decidedly more exotic junk food tastes.

Salt is especially popular in Japanese snacks – starting with the shreds of dried salted fish and squid that are often served the way beer nuts and beef jerky would be served in the U.S., and of course the myriad forms of “osembe,” or soy sauce-coated rice crackers, which are sold in bags or individually wrapped like jewels in paper and foil and plastic.

Rice crackers are even catching on – especially the little peppery ones that are called “kaki-no-tane” (“persimmon seeds” – aptly named for their appearance if not their flavour). You can find small packets of them in regular supermarkets. And I’ve gotten many co-workers hooked on rice crackers by buying them every time we get a visit from a couple that sells pre-packaged candies and snacks from office-to-office.

I bought a bag of rice crackers, and one of my co-workers recoiled in mock horror when he popped one of the shiny glazed pieces in his mouth. I’m not sure what he expected, but the blast of crunchy saltiness wasn’t it.

“Ooh, that’s sort of gross,” he said, as he spit it into his hand and tossed it into the trash can.

Others in the office had either had them before, or liked the flavour when they tried. The first bag was gone in a matter of hours. The next time the salespeople came to the office, I got two bags – one for myself which I hid in a drawer, and one for my co-workers, which I left on my desktop. It too was gone by the next day. (My personal bag didn’t last much longer).

Now, several people in the office buy them when the snack people stop by our office – they’ve learned to bring extra bags with them so they don’t have to trudge out to their van to fill our requests.

The guy who thought they tasted bad has taken a liking to them. I figure that’s one way of bringing Japan and America together.

Here are some other Japanese junk foods you should know:

Karinto – A traditional Japanese wheat cookie, blobs of wheat flour coated with sugar sesame seeds and deep-fried so they come out looking like molasses-drenched Cheetos. That’s actually a charitable description – I love ’em to death, but even growing up, I called Karinto “Nekko-no unchi,” which translates to “cat poop.” Why? Because it looks like the stuff you scoop out of the litter box. Don’t let that stop you, though – they’re tasty.

Yokan – This is a classy snack in Japan, served in delicate slices at tea ceremonies. It’s a jellied slab of sweet bean paste (the Japanese get a lot of mileage out of soy, rice and beans) which comes in many subtle flavours and colours – from a pearlescent green (tea flavoured) to deep plum (plum flavoured). Yokan is wrapped in foil, then slid in a cardboard sleeve and finally encased in a pretty box. They’re very sweet and sticky, which is why people slice a thin piece at a time. Not me – I squeeze out big chunks and bite ’em right out of the wrapper.

Mitsumame – This treat comes served in dainty little cans, but it’s roughly the equal of canned American fruit salad, with a watery syrup and soft, sweet beans (there they are again!) and cubes of almost-hard gelatin floating amongst the slices of tangerines and pieces of grapes and cherries.

Calpico – This is a very popular non-carbonated soft drink in Japan, which you can buy either in concentrate form (in a brown glass bottle wrapped in white crepe paper with blue polka dots) or these days in individual, pre-diluted cans. What’s so special about this stuff? It’s yogurt-based – at least, its ingredients include nonfat dry milk “treated with lactic acid culture” – and it’s very, very sweet depending on how much you dilute it. I like mine with club soda for a fizz, but I’ve also been known to chug it right out of the bottle.

One side note about Calpico – Its actual Japanese name was and still is, Calpis, pronounced “Cah-roo-peesu.” But the importer changed the product name in the U.S. because “Calpis” to many Americans looks like it should have the same pronunciation, seemingly, as cow urine.

Thus ends my intro to Japanese junk food. Anyone care to join me for some Karinto washed down with a brisk Calpico? Yum!

Gil Asakawa is a member of the Pacific Citizen Editorial Board, and the author of “Being Japanese American. He blogs about Japanese and Asian American issues on his blog at www.nikkeiview.com, and he’s on Facebook and Twitter. He was recently named the 2014 Asian American Journalists Association AARP Social Media Fellow.