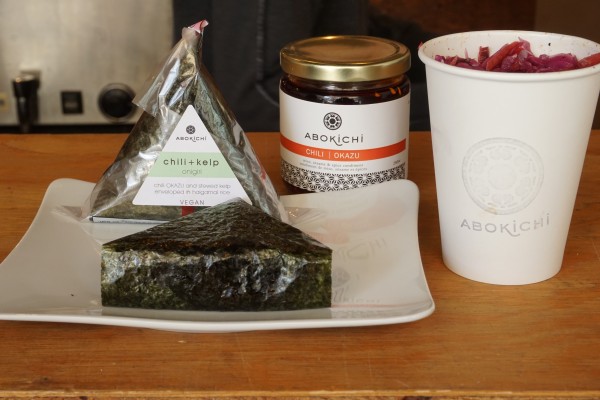 Abokichi sells a variety of onigiri including: chili and kelp and pickled ginger as well as okazu (a condiment sesame oil, miso paste, fried garlic and onion, and spices). Photo by: Asha Walker

In Japan, there’s a snack that can fit in the palm of your hand. It’s called onigiri and now just a 30 second walk from Dupont stations in downtown Toronto you can get a gourmet version of this snack from Abokichi.

“It’s like the Japanese equivalent of a sandwich. It’s something you would eat from lunch, a causal food,” owner Jess Mantell explains. Toronto native Jess Mantell and partner Fumi Tsukamoto, who is from Japan, decided to open up the cafe after Mantell’s trip to Japan. 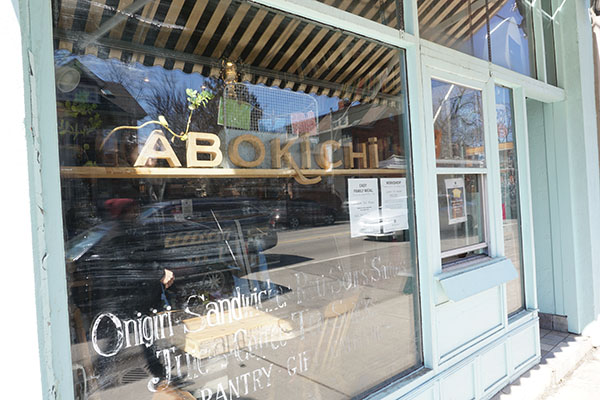 Mantell was teaching in Japan at the time said there was a chef, who lived in her neighbourhood. One day he said he would show her Japanese cooking. In her mind she was expecting something elaborate like tempura.

He ended up showing her how to make onigiri.

“It was a bit underwhelming,” Mantell said. “I didn’t appreciate it at the time, but actually I used the skill a lot while I was there.”

Mantell wanted to introduce the skill she had learned and onigiri to people in Toronto.

“When I first came back I started developing some recipes and just testing it out, seeing if people wanted to buy it,” she said.

So instead the two decided to sell their handmade onigiri at local farmers markets around town.

The reaction was quite positive and they decided to acquire a sandwich shop where they could sell onigiri there as well, and so Abokichi was born.

Abokichi is a combination of avocado in Japanese and kichi which mean fortunate. It represents “the melding of something that is foreign but quite adaptable all over the world,” said Mantell.

There are currently have 7 types of onigiri that they sell including: chili and kelp, pickled ginger in red shiso and umeboshi surrounded by beet season rice.

The onigiri is made using haigamai rice, a half milled rice and healthier alternative to white rice, but not as hard as brown rice.

At Abokichi they use molds to the make onigiri, to insure they are uniform. “They are very much handmade, they are just simple molds,” Mantell said. 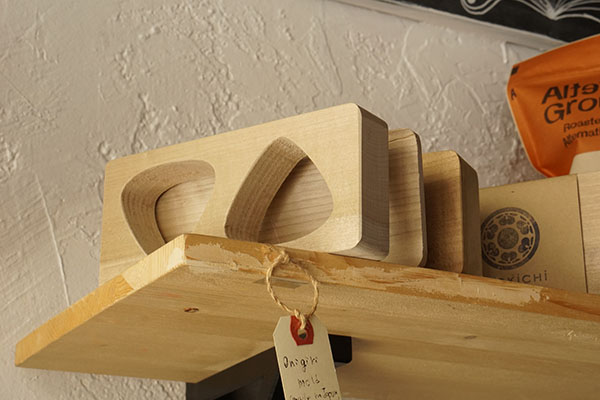 Mantell is keen on teaching people how to make onigiri by hand.

She said the way to make onigiri is by wetting your hands, getting some salt and some rice. Then you gently cup your hands in a triangular shape and press the rice together until its one solid that won’t fall apart when you bite, without crushing the rice she said. After that you wrap the rice in nori.

With Abokichi offering onigiri workshops, it is clear that Mantell and Tsukamoto want to do more. “For the future we want to build up a shelf stable product line,” Mantell said.

The company also sells okazu (a condiment sesame oil, miso paste, fried garlic and onion, and spices), it’s clear to see that Abokichi is more than just a café that sells onigiri.