Ai Weiwei’s According to What?, asks visitors to question the authority of meaning A snake curls through the upper halls of the Art Gallery of Ontario.

Summer camps – some with younger and some older students – idly walk by looking up and pointing to the installation that winds its way towards Ai WeiWei‘s new exhibit at the gallery.

Made from 883 backpacks, all interlaced, the piece commemorate the 5,000 school children who died when their schools collapsed in on themselves in the Sichuan earthquake of 2008. It’s a piece laden with a kind of sadness that’s hidden on the surface, and much like many of Ai’s piece has deeply entrenched meanings not immediately shared with viewers. 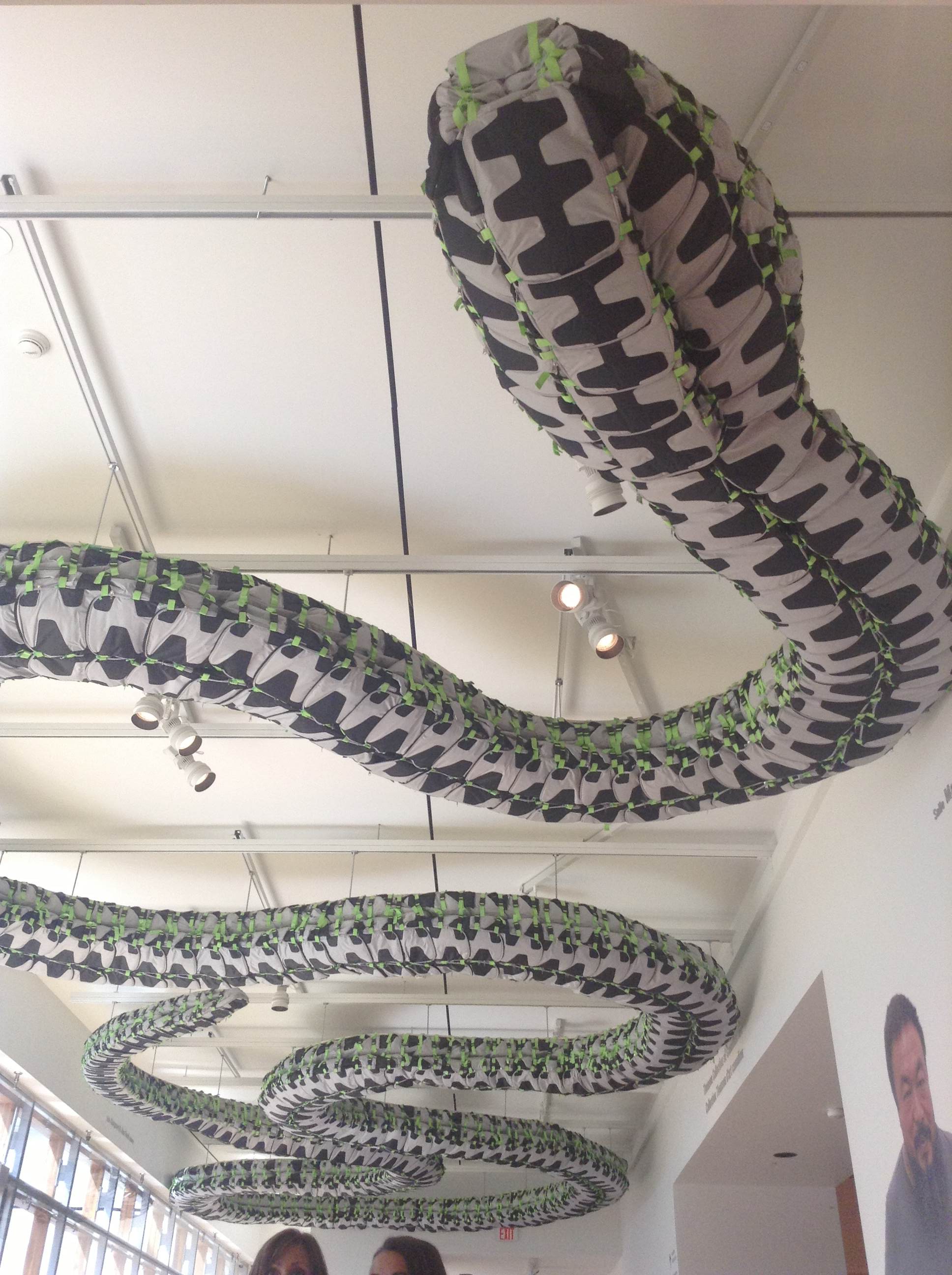 “A lot of works are not only about what you see, but there are so many social, political, and cultural contexts behind them,” Mami Kataoka, Mori Art Museum’s chief curator, said at a media preview in Toronto.

Kataoka, along with Kitty Scott, the AGO’s curator of modern and contemporary art, brought this installation to Toronto and Ai’s art to Canadians eager to see his works. No one would be more eager to see the exhibition than Ai himself, but was unable to attend this preview or any preview of his around the world.

“The biggest challenge was, particularly when he was detained in 2011, that nobody knew including the people from his studio how long it was going to be,” Kataoka said. “After he was released and I could visit him in his Beijing studio and we were in constant communication over email and although he cannot travel abroad, he has a very good sense of space and reading the plans.”

On April 3rd, 2011, Ai was detained at the Beijing Capital International Airport while on his way to Hong Kong. He was kept there for 81 days and then released in June on bail without his passport returned. It is widely believed he was detained to help stem any uprisings in China amidst the Arab Spring.

Ai is as much a political prisoner as he is one of the world’s most famous artists with his exhibitions dotting the globe and now highlighting parts of Toronto. After his release, he was placed under severe travel restraints, but this only strengthened his resolve.

“Power to an artist is an encouragement and an acceptance for art to address areas and concerns that are usually considered different according to mainstream aesthetics or social norms,” wrote Ai in an e-mail exchange with The Canadian Press.

“It gives people or a collective consciousness the strength to respond to calls for concerns that relate to our social-political conditions. Rather than thinking of my political situation as a drag, I see it as an opportunity for me to think about these constraints, to act in response, and relate these actions to profound meanings. The most important of which is the message of freedom, and I hope it benefits everyone,” he wrote. 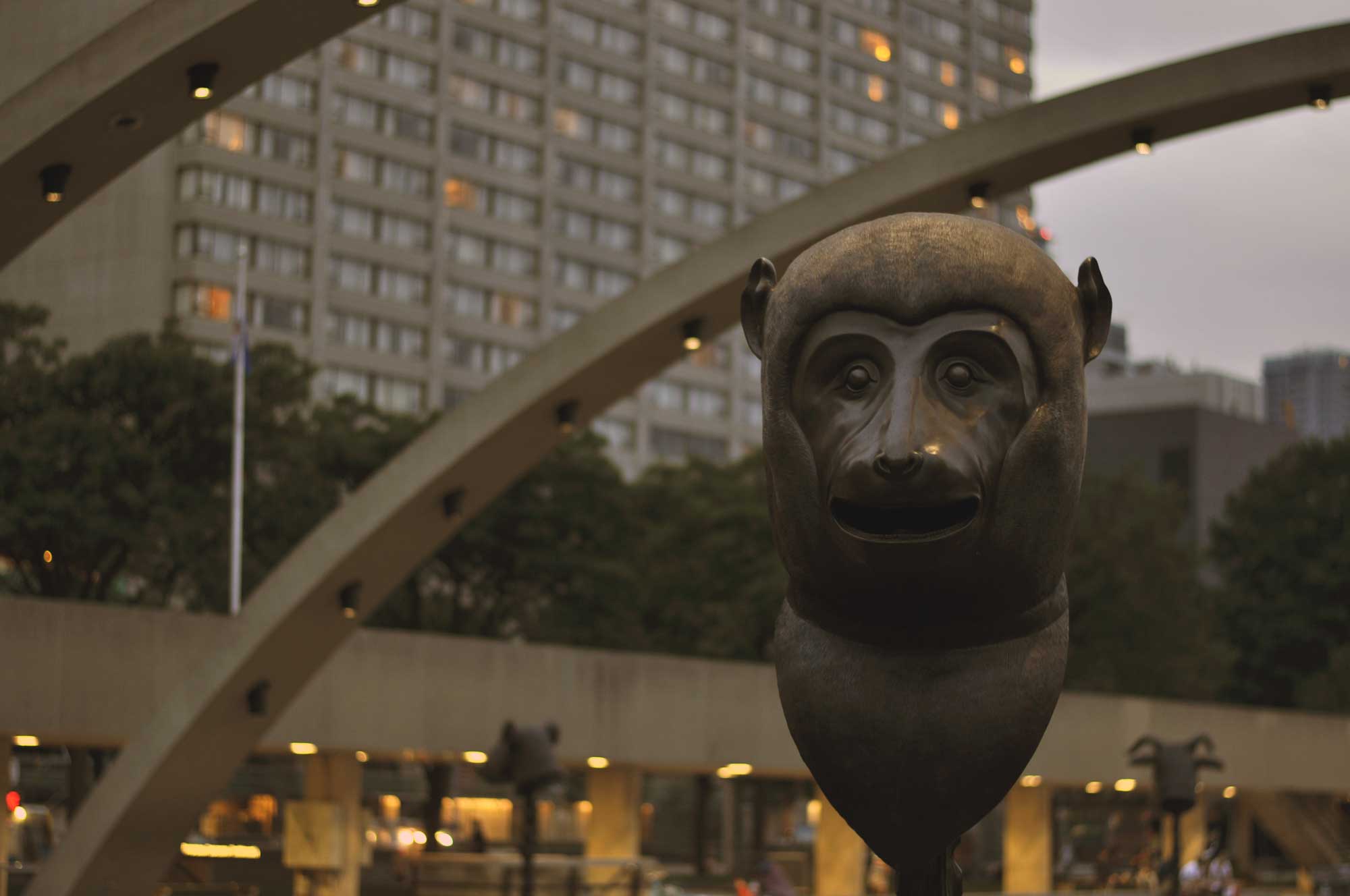 Known for his political activism and his politics, Ai has become one of China’s greatest dissidents, yet he’s also misunderstood, according to Kataoka.

“I think many people question how he separates his political activities and art,” said. Kataoka.

“It’s very important for North American audiences to see his work because he was more produced as an activist and dissident artists, and it’s more about the media announcing his character and everything. If you see some of the images in Never Sorry he is very modest and charming, and not a really radical person,” she said.

When preparing the exhibition, Kotaoka and Scott still faced the challenge: how do we set up an exhibition without the artist?

“After he was released and I could visit him in his Beijing studio and we were in constant communication over email and although he cannot travel abroad, he has a very good sense of space and reading the plans,” Kataoka said.

What viewers find inside of the art exhibition is a retrospective on his artistic career. From photography exhibitions, sculptures from his early years, and his more political works from today, According to What? is a powerful depiction of his history as an artist. It also has a number of pieces dedicated to the victims of the Sichuan earthquake of 2008, including a piece that depicts thousands of names of the victims all on one wall.

“For him everything is one and everything comes from himself,” Kataoka said speaking about his inspirations and the media’s reactions to the show. “I think it’s a bad habit of Western people who want to categorize everything. For him, any media or genre of art they are all inseparable.”

The art exhibition opens August 17th until October 27th. Here’s a small gallery of photos taken at the exhibition. According to you, how do these make you feel?