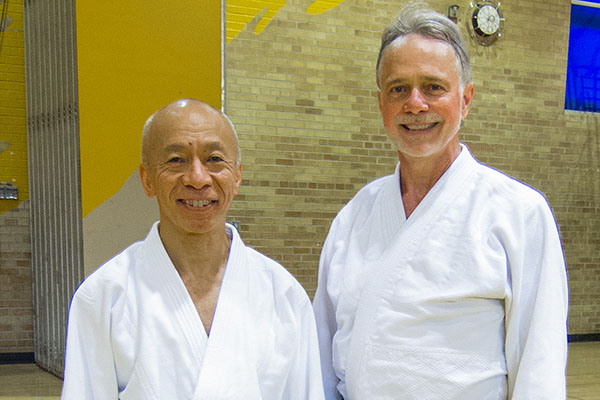 George Hewson, right, and Hayato Osawa, left. at the CAF Summer Camp in 2015. Both are master instructors or Shihan.

TORONTO — George Hewson, who has been practicing Aikido for over 40 years, officially received his title of Shihan or Master Instructor after learning of his recommendation last June.

A Shihan, according to the Canadian Aikido Federation, is an Aikidoka of at least 6th Dan who has been at the rank for a minimum of 6 years.

There are currently three other Shihans in Canada including Ishu Ishiyama in Vancouver, Yumi Nakamura and Osamu Obata in Toronto.

“Like most other things in life, achievement in Aikido is based on one’s own efforts,” George Hewson told Nikkei Voice.

“But also like most things in life, there is no success without the help of many others. I would like to thank my many teachers, training partners, and students for all that they have taught me,” he said. “Above all I would like to thank my wife, Gerry, who has been my severest critic and most enthusiastic supporter since we met in the dojo in 1978.”

She, according to Hewson, was just as surprised as he was when it was announced he’d be receiving the title, but also pleased that his forty years of dedication to Aikido was being recognized. Gerry Hewson (nee Nishimura) is also a 4th degree black belt and Hewson said she understands the challenges of training.

While the title does not confer a promotion in rank or any additional responsibilities, Hewson says what matters to him is ensuring his students continue to learn.

“I don’t think much about rank,” Hewson said. “My concern now is to continue my own training and to assist the students in my dojo and those I teach from across Canada.”

The title was conferred to Hewson by Hayato Osawa Shihan of the Hombu Dojo in Japan. Osawa has been travelling to Canada twice a year in order to teach and conduct black belt promotion examinations.

Last June, Hewson was invited to a dinner with Osawa along with Osamu Obata and Ishu Ishiyama and said it was a complete surprise when he learned they were going to recommend him and Yumi Nakamura for the title.“I was completely surprised,” Hewson said.

It was founded in 1925 by Master Morihei Ueshiba (O’Sensei) and the techniques were derived from the tactics developed by Samurai warriors.

The essence of the martial art is the use of total body movements to create a spherical motion around a stabilized centre.

Unlike Karate, there are also no tournaments or competitions surrounding Aikido. It has been proved as an effective method of self defense and is used by many police forces as a basis for their control and restraint tactics.

“Aikido is a method of self-discipline, self-realization, and self -defence. Its essence is to learn to be aware, confident, adaptable and empathetic,” Hewson said.

“The humane vision of Aikido’s founder, Morihei Ueshiba O-Sensei, continues to attract students. The CAF has never had more members than now,” he said.