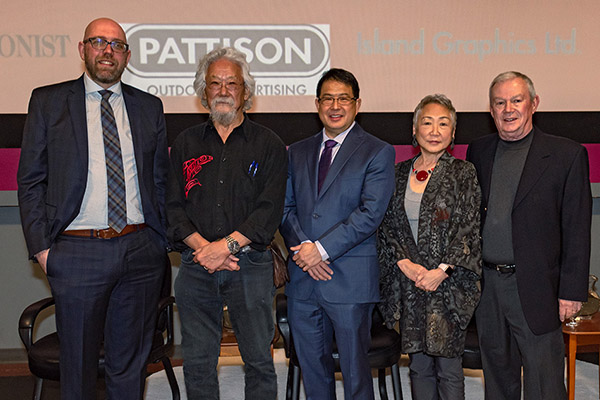 VICTORIA — Artist Marlene Howell pored over hundreds of old photographs of confiscated Japanese Canadian fishing boats in her role as artist-in-residence at the Maritime Museum of B.C.

As a result, she created Series for Contemplation, four paintings that will be part of The Lost Fleet exhibition at the museum until March 31.

“Going through all of those black-and-white photographs, all I could think was each photo, each boat, had a story to tell. A sad story,” explains Howell.

That story is of the 1,137 Japanese Canadian-owned fishing vessels that were confiscated by the Canadian Navy in the days following the bombing of Pearl Harbor on Dec. 7, 1941. These boats were the livelihood for families, many were built by hand, others not yet paid off and were sold to canneries and non-Japanese fishermen for a fraction of their original price. 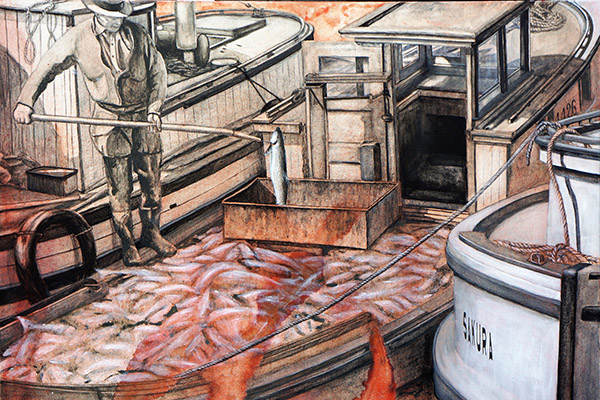 The Way it Was by Marlene Howell.

The exhibition follows the lives of the fishermen from their arrival in Canada during the late 1800s, the confiscation of their vessels and internment to their dispersal across Canada when they were forced to rebuild their lives east of the Rockies. The exhibition invites visitors to learn how deep-seated racism played a role in the mistreatment of an entire community. It also encourages visitors to consider whether this kind of injustice could happen again. Photographs, news articles, government documents, fishing boat models, artifacts and Howell’s artwork tell the story of a dark period in Canadian history.

“There has been positive reaction [to the exhibition],” explains Brittany Vis, Associate Director at the Maritime Museum of B.C. “There have been lots of people coming and saying they didn’t know what happened.” 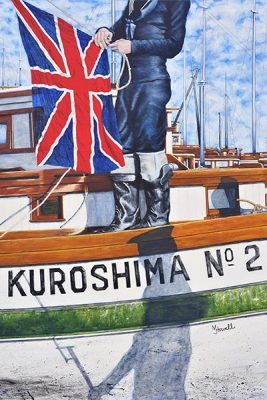 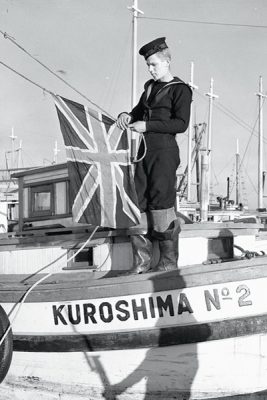 Taking part in this exhibition has been a way to connect and learn about her own Japanese Canadian heritage. Howell says her grandparents did not talk about their experiences during the war.

This opportunity has also created unexpected connections to the Japanese Canadian community, says Howell. She connected with Susan Fukuyama, the daughter of golfing buddies, who had extensively researched confiscated Japanese Canadian vessels. Fukuyama’s grandfather owned two fisheries and seven fishing boats that were all confiscated during the war. Howell featured Fukuyama’s grandfather’s boat, Howe Sound IV in her painting of the same name. Howell had shown Fukuyama some of the photos she was thinking of recreating, when Fukuyama excitedly pointed out one was her grandfather’s boat.

“So I had to use that one,” explains Howell. “The reason I chose that one for one of my paintings was because, for me, it made an impact to see her grandfather’s boat towing other Japanese Canadian fishing boats.”

In the painting, the boat can be seen towing other Japanese Canadian-owned boats. The Canadian Navy used larger confiscated Japanese Canadian boats to collect other boats, often causing them to bang against each other, irreparably damaging them. Howe Sound IV will be on display next to some of Fukuyama’s research, as well as some photos and fishing relics belonging to the family.

“What’s so exciting about Susan Fukuyama’s exhibit is it is one family’s story. Can you imagine how many are out there,” says Howell. “It sends chills up me.” 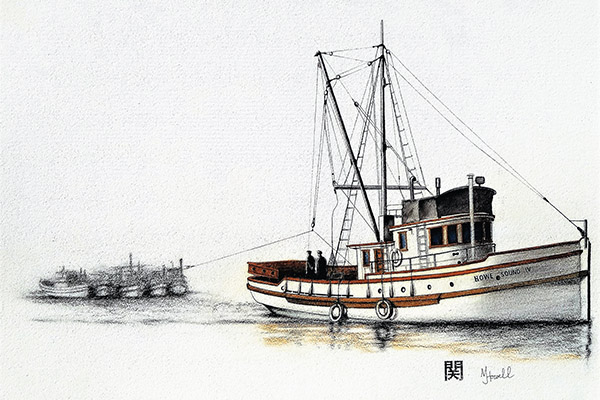 The Fukuyama family is not the only connection Howell has made through her paintings. Already she has found two other families who have seen their ancestor’s boats in her paintings, The Way it Was and Under New Ownership.

Howell hopes visitors to the museum can learn about what happened to Japanese Canadian fishermen. As well, she hopes younger generations of Japanese Canadians will be curious about learning more about their own histories.

“I’m hoping that my paintings, the titles, Susan Fukuyama’s exhibit, will make them more away of that part of history and what our ancestors went through, and the sacrifices they made,” says Howell.

The Lost Fleet exhibition is on loan from the Vancouver Maritime Museum. The exhibition and Howell’s Series for Contemplation will be at the Maritime Museum of B.C. from Jan. 12 to March 31. As artist-in-residence, Howell will be painting on Tuesdays and Thursdays from 10 am to 2 pm. For more information visit: www.mmbc.bc.ca.


[…] At the launch, I spoke about Susan Fukuyama and her family. A Sansei, third generation Japanese Canadian who lives in Victoria, Susan has a deep family history tied to the fishing boat industry. She has done some incredible research on her family. Her story, along with photos and artifacts were displayed in the exhibit, along with original art pieces by Victoria artist Marlene Howell. […]