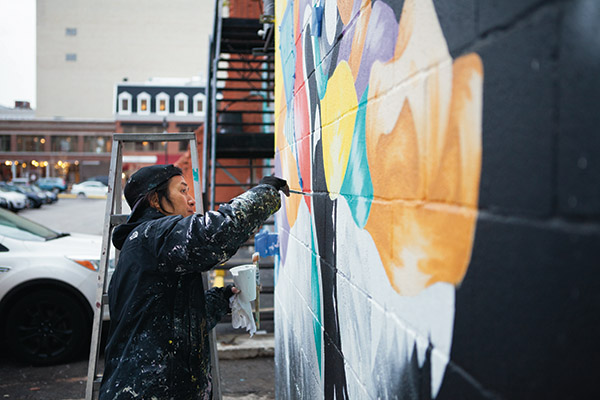 
Artist Taka Sudo’s murals can be found around Vancouver. Sudo will be participating in the 25th Annual Eastside Culture Crawl this November. Photo credit: @axiscreative.

VANCOUVER — During the pandemic, as work slowed down and projects, exhibitions, and shows halted, for artist Taka Sudo it became a time to reset and reflect on himself as an artist. He began creating just for himself and discovering the type of art he wanted to make.

“Since the pandemic, the work I was making was not really commercial art, but it was more [personal]. I felt more honest about my creativity and more honest about my passion,” Sudo tells Nikkei Voice in an interview. “I feel better about being an artist these last two years because I don’t feel like I’m working. I just feel like I’m making [what] I really want to make.” 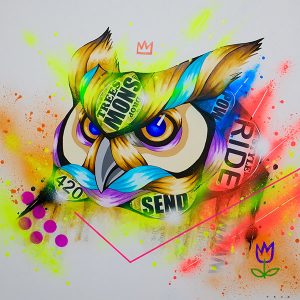 Sudo will be participating in the 25th Annual Eastside Culture Crawl, a two-weekend long arts festival in Vancouver, exploring the art created during the pandemic and celebrating the resilience of the Eastside Arts District community. Running Nov. 12 to 14 and Nov. 18 to 21, the festival includes online and in-person activities and exhibits, and artists open their studios to the public for tours. This year is Sudo’s first time participating in the festival, and he will open his studio for in-person tours and exhibit his work.

Sudo is a self-taught mixed-media artist who creates massive murals across Vancouver and original pieces on canvas. He finds inspiration for his art from the environment around him.

“It is a different lifestyle for sure. I really like both environments. I like the chaos of Tokyo. It’s very chaotic, but we can still find some kind of beauty in the chaos in Tokyo,” he explains. “But also I like the lifestyle in Vancouver, so chill and close to nature.” 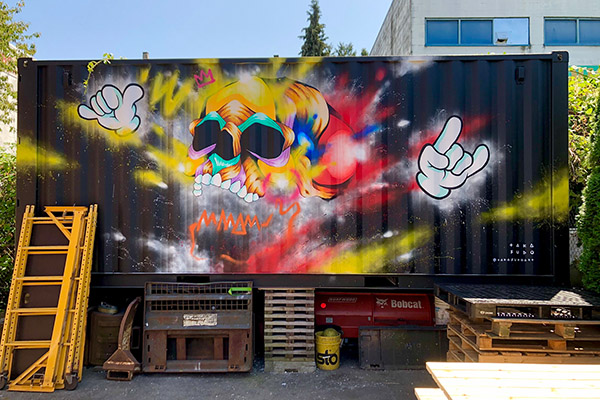 Initially, Sudo visited Whistler for the skiing in 2002, before moving to Vancouver in 2007. Sudo’s love of skiing and winter sports translates into his paintings through the energy and movement of his brushstrokes.

Sudo uses bright neon colours, collages of newsprint, and lettering to form organic shapes like animals. Using spray paint, acrylics, newsprint, and ink, Sudo’s art reflects the street art culture in Tokyo. The street art scene is thriving in Japan, especially in Tokyo, explains Sudo. It’s difficult for up-and-coming and emerging artists to sell original pieces—people don’t buy original art in Japan like in North America, partially because their homes are smaller, he says. So instead, artists take to the streets.

Sudo’s art can be found around the streets of Vancouver, as he has painted murals for the city and local businesses. In April 2020, Sudo participated in the Vancouver Mural Festival, where over 40 artists painted on the boarded-up storefront windows of businesses closed during the pandemic. Public art, like murals, remove barriers often placed on art, says Sudo. People don’t need to visit the gallery or own the piece to enjoy the art. Anyone walking down the street can see the mural, so Sudo looks to the atmosphere and environment of the neighbourhood for inspiration. 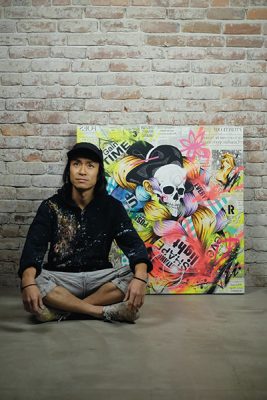 “Every time I [paint] walls in a public space, I kind of feel like [it] is a collaboration [with] the city or neighbourhood,” says Sudo.

Sudo also finds inspiration from the people around him, such as fellow artists, or by showing his work to the public, seeing their reactions, and hearing their feedback. But the pandemic has cut off a lot of that engagement and inspiration.

In November, when the Eastside Culture Crawls takes place, Sudo is usually avoiding the Vancouver rain, visiting Japan. But this year, he will be in Vancouver and participating in the festival for the first time.

“I’m also expecting to get some inspiration from other artists or visitors and by getting some feedback because we haven’t had that kind of thing for almost two years,” he says. “Vancouver has so many different styles of artists, so it [will be] super fun to explore the neighbourhood during the Culture Crawl.”

While the pandemic has been a time of reflection and rediscovery as an artist, Sudo says he’s still searching for answers. But he knows he wants to create art that speaks to people. Instead of thinking about his ego or trying to create something iconic, he wants to make art that uplifts and inspires people.

“[The pandemic] was a very good opportunity to rethink what is art, what is the artist, and what we should make for society, even during this pandemic. Because art is not essential work, but of course, life is better with art,” Sudo says.