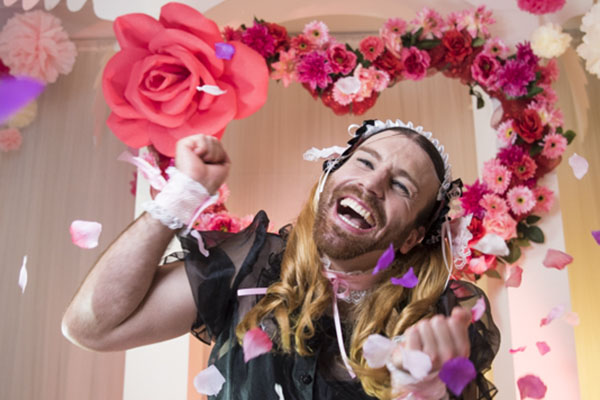 Aussie pro-wrestler and heavy metal sensation Ladybeard describes his passions as dancing, singing and destroying … and now he has a new playmate to help him delight and assault the senses of adoring fans across the world. Photo courtesy: Naoko Tachibana

Debuting at Club Asia in Tokyo on 5 April, Ladybeard and Japanese singer, pro-wrestler and body building idol, Reika Saiki, tore up the stage as new pop group Deadlift Lolita. This muscly duo has something for everybody: heavy metal vocals from the towering Ladybeard, delicate alto singing from the doll-like Saiki, dance energy galore, and cute outfits and pigtails all round. The group’s debut single and music video have just been released.

Three years after moving from Hong Kong to Tokyo, Ladybeard now has more than 200,000 Facebook followers and a long list of successes, including two years as the frontman of one of Japan’s biggest kawaii (‘cute’) metal groups, Ladybaby. The group’s first music video went viral in 2015, with 20 million hits. Ladybeard has since performed in 15 countries, in five languages.

Ladybeard grew up in Adelaide, Australia as “the fat kid at school”. Looking back, he is grateful to his schoolyard bullies for the career guidance and silver linings they unwittingly gifted him. As a teenager, he discovered the empowering worlds of heavy metal and martial arts, and the whimsical escapism of cross-dressing. As an adult, he applied dogged self-discipline to those passions and built his dream career.

Ladybeard moved to Hong Kong in 2006, after completing a Bachelor of Creative Arts and stunt training in Australia. He worked as an actor and stuntman on television shows and martial arts movies. He also took up professional wrestling, appearing in cute outfits and pigtails. Despite the intense physical work and gruelling hours, Ladybeard still had massive stores of untapped performance energy.

Feeling restless, he searched his soul. “I sat down with myself and said ‘Alright, what’s going on here?’” he recalls. “The answer came back: ‘I don’t want to do what I’m doing right now.’ So I asked myself what I wanted to do, and had a profound realization. I walked out of my room, almost in a trance. My flatmate asked if I was okay and I said ‘I think I want to be a rock star.’ He said ‘Do it.’ And I said ‘I think I will.’” 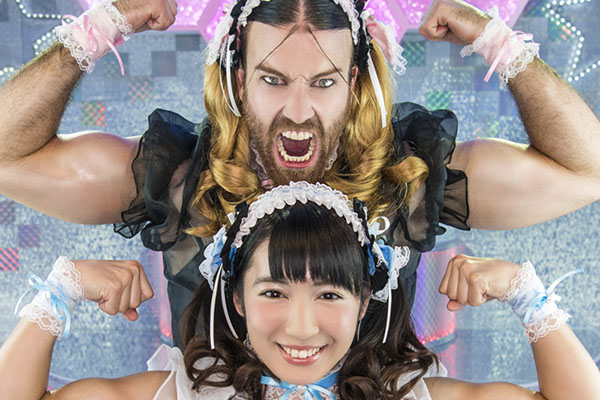 Ladybeard and Reika Saiki will debut at Club Asia in Tokyo on April 5, as Deadlift Lolita, a new and super ‘kawaii’ band.

Ladybeard considered Japan – the world capital of kawaii culture and all things unique and quirky – fertile ground for a budding rock star. He moved to Tokyo, and joined the heavy metal scene and pro-wrestling circuit. He also posted photos of himself on social media, which quickly netted him a large and diverse fan base including lovers of kawaii, wrestling, martial arts, heavy metal and cross-dressing.

Despite his versatility and wide range of achievements, Ladybeard claims that his one and only natural talent is a very strong performance energy. “This career has been the byproduct of finding a way to exploit that natural strength whilst overcoming or working around my natural weaknesses, of which there were many,” he says. “I kind of had no choice but to make a career out of it,” he laughs. “There wasn’t any other option.”

So is there a long term plan? “World domination, of course,” Ladybeard says. “What else?”