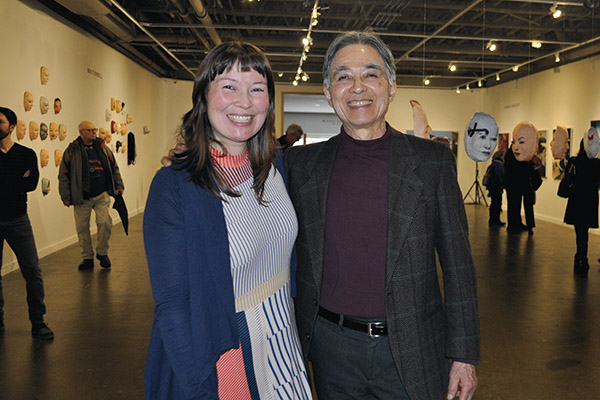 TORONTO — On the surface, Nisei artist Norman Takeuchi and Sansei artist Miya Turnbull’s work could not be more different. Hanging on opposites walls in the gallery at the Japanese Canadian Cultural Centre, the two artists are part of the gallery’s new exhibition, Blended.

Norman Takeuchi‘s artwork consists of large paintings that mix abstract shapes with familiar Japanese images, like woodblock prints and Japanese Canadian imagery. Miya Turnbull works in a variety of mediums, but the gallery features 60 of her self-portrait masks. While the two artists are different in their mediums and materials, they both embrace the exhibition’s name, Blended, in their style and the messages they try to convey about their Japanese Canadian identities.

“We’re so different in our approaches, but the contrast is really appealing,” Takeuchi explains in an interview with Nikkei Voice. “It’s interesting that the same message can be produced in such different ways. I think that Miya and I both feel the same way about being Japanese, but she has taken one approach, and I have taken another. 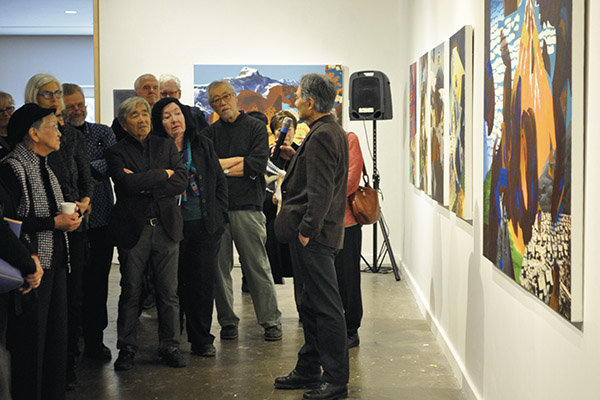 Takeuchi, an Ottawa-based artist, is a retired graphic and exhibition designer. His paintings are large, expansive pieces, some reach 4ft by 6ft. In his paintings, he blend large abstract shapes with recognizable Japanese images, like those from ukiyo-e woodblock prints. He also mixes in Japanese Canadian images, like those inspired from photos of internment camps or impounded fishing vessels. The artwork has become a way for Takeuchi to fuse his Japanese and Canadian identities together, where they now work in harmony to create beautiful paintings.

“In my work, I’ve actually used the word ‘blended,’ because in the end, that’s what I felt my work was doing, was blending two cultures,” says Takeuchi. 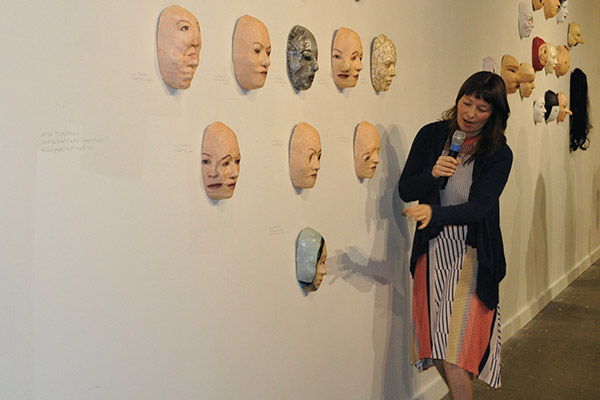 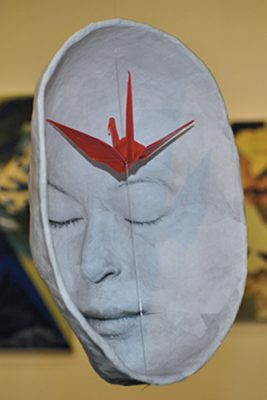 Turnbull has been creating artwork since she was in high school, growing up in Onoway, Alta. She began making masks while studying at the University of Lethbridge. Turnbull has been living in Halifax, N.S. since 2001, where she was able to get grants and explore her career as an artist. She sees her masks as a blending of her own self portrait with other images, characters and materials.

“Each one is a self portrait, but each one is a variation of that, so it’s exploring different personas, or blending with different characters or ideas,” Turnbull tells Nikkei Voice. “The common link between them all is that I am somewhere in between there.”

Each mask starts from a mould of her own face which she then explores, with collages and paper mache or by contorting and stretching her image into other characters. More recently she has been incorporating Japanese techniques like indigo-dyeing, origami and sashiko stitching as well as learning calligraphy into her masks.

Turnbull also been exploring multimedia projects like making videos or taking photos with the masks, or projecting videos onto blank masks. 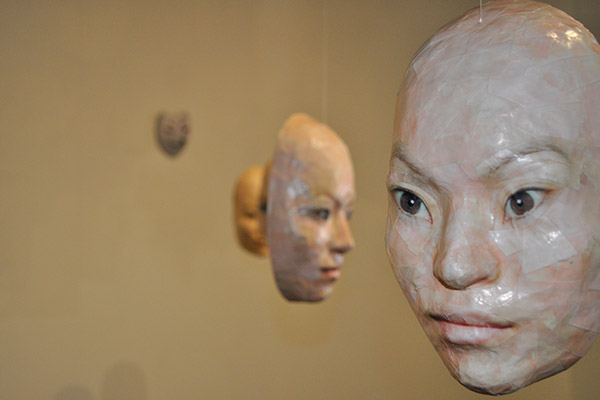 Miya Turnbull’s Somewhere in Between.

“The idea is just changing that one feature, how different we look and how we respond to that,” explains Turnbull. “But on the inside it is just all the same. Sometimes our inner self doesn’t match with what we are trying to put out, so it’s always trying to find a commonality between them all.”

In exploring their cultural identities in their artwork, both artists have come to have a better understanding of themselves as Japanese Canadians, and their art has become a celebration of that identity. 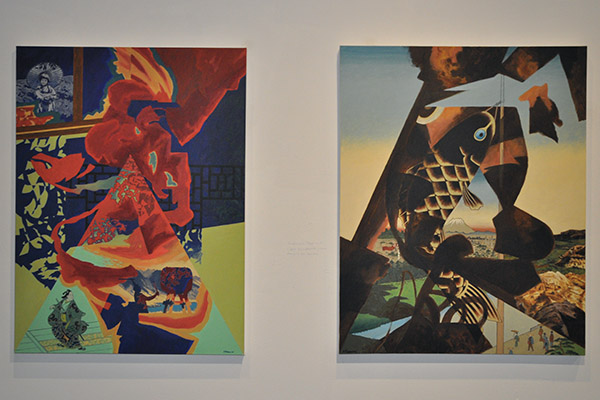 Norman Takeuchi’s Equilateral #6 (For the sake of the children) 2018, Acrylic on canvas and Carp Windsock.

For a long time, Takeuchi did not want to include any kind of Japanese imagery in his artwork, and his art was purely abstract. At first, when incorporating Japanese images into his artwork, the paintings felt fragmented and discordant, explains Takeuchi. Eventually the paintings became a kind of balance, and there was a sense of harmony between the abstract shapes and Japanese images. Like in Carp Windsock, the painting combines images of carp kites, like the ones used in Children’s Day celebrations in Japan, with shapes of triangles, which Takeuchi explains are the strongest shape. The paintings are a salute to his parents, and how hard they worked to give him a better life despite the hardships they endured. 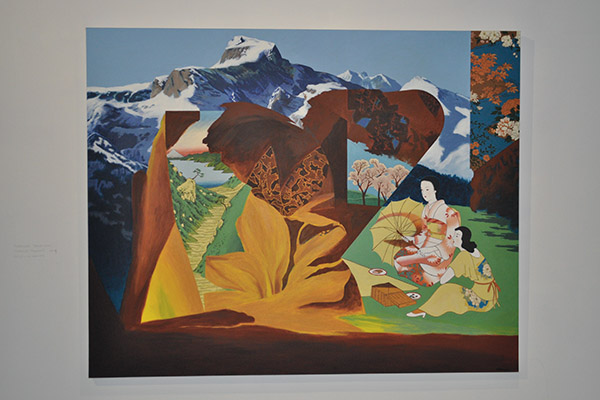 “I wanted to stress the Japanese elements in my work. I feel now, my work is a celebration of who I am,” explains Takeuchi. “I feel comfortable being who I am, and so my work is more colourful, more in harmony with the two cultures and I would say things are looking very good.”

For Turnbull, creating self portrait masks is a way she can examine her own self image, separate from herself, and thus has become a way to better understand herself.

“Being able to remove myself, just temporarily, from my own image, and look at it and then just that separation helps,” she says. “I used to always not want to be different, but now [my art] is a celebration of that.”

Blended will be at the JCCC Gallery until March 31.


[…] 2019, Turnbull exhibited her work alongside artist Norman Takeuchi at the JCCC Art Gallery. The exhibition was Turnbull’s return to working as a full time artist after a decade […]