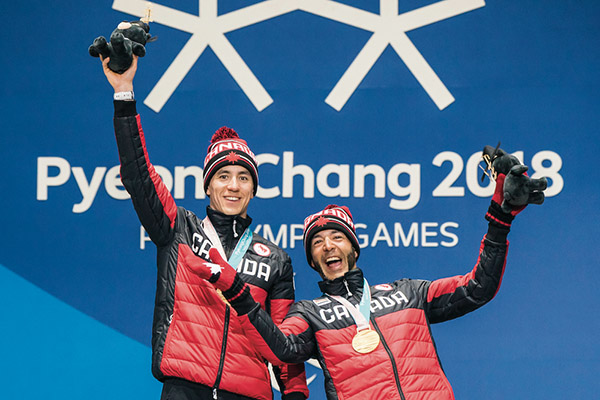 Though achieving that title was not something on McKeever’s mind coming into the Games. The first time he heard the title was while going through the press zone after his race.

“They were like, ‘So how do you feel about being officially Canada’s most decorated Paralympian?’ And I said, ‘Am I?’” McKeever recalls in an interview with Nikkei Voice.

McKeever, a Sansei Japanese Canadian, surpassed alpine skier Lana Spreeman‘s record of 13 medals, from 1980 to ’94. McKeever now has 17 medals, 13 of which are gold, between five Paralympic Games from Salt Lake City in 2002 to Pyeongchang in 2018. 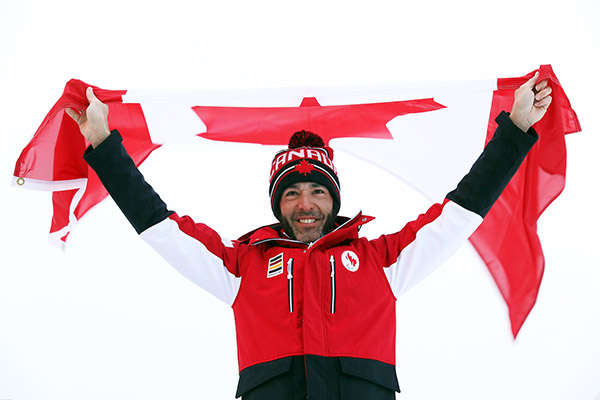 Pyeongchang, Korea – Brian McKeever has been selected to carry the flag in the opening ceremony for Team Canada at the 2018 Paralympic Games in PyeongChang. Photo Scott Grant/Canadian Paralympic Committee.

The 38 year old’s love for skiing began at a young age, putting on his first pair of skis when he was two or three years old.

“I blame my parents on that one,” he says. “They started both my brother and I when we were probably two or three years old. We’d just cruise around the backyard, and when we got bigger, we expanded to the park next door, and pretty soon it was trips out to the mountains.”

McKeever’s  brother, Robin, also an Olympian, started a successful competitive cross-country skiing career at an early age and is an 11-time national champion. McKeever’s inspiration to become a competitive skier from watching his older brother.

“For me it was easy, the little brother wanting to be like the big brother,” explains McKeever. “I kind of just tagged along and followed six years behind, so I think my path was kind of set before me because of him.”

McKeever’s drive to go to the Olympics began while watching the Calgary Winter Games in 1988. McKeever was in the third grade at the time, and went to see cross-country races in Canmore, Alta., where was born and raised. His family was so invested, they finally fixed their broken TV so they could keep up with the Games, McKeever jokes. Robin, a junior racer at the time, got to pre-run the Olympic track in Canmore to make sure it was clear. All these things got McKeever excited about the Games, and 10 years later, he was in Nagano, Japan watching his brother compete.

“That was a big moment for all of us,” says McKeever. “It was Robin’s first Olympics, and it was in Japan, so there’s a sense of culture that we had around that, growing up with Japanese grandparents. That was a really exciting time to live the sport through that.” 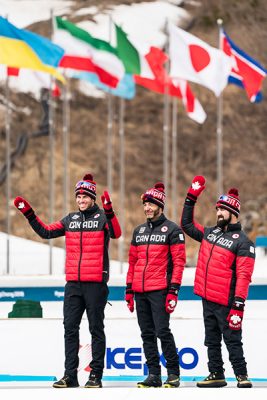 McKeever represented Canada in international cross-country competitions around the world during his early career, including the Junior World Ski Championships, in Switzerland in 1998 and the International Ski Federation (FIS) cross-country skiing competition in Duntroon, Ont., finishing in the top 10 in 1999.

In 1998, McKeever started to notice problems with his eyesight. He says he struggled to read billboards, addresses and road signs.

“I started losing my eyesight when I was 18, and I suppose if I look back, there were signs that I was losing it a few years before that, but it never clued in,” he explains. “I had my eyes checked, and learned I didn’t need glasses, that wasn’t the problem, so then I knew what it was.”

McKeever knew he had Stargardt disease, a genetic macular degeneration, where cells in the central part of the retina die, leading to the loss of sight in the centre of the eye. It is genetic, and McKeever’s father, William, as well as his aunt, both have it. In 1998 he was diagnosed with the disease.

“There’s always a knee-jerk reaction that things are going to change, and how am I going to deal with this, I’m not going to be a skier anymore,” says McKeever.

After a few months to process the diagnosis, he says, “I decided I wasn’t going to let it change things, and I was going to continue skiing, continue going to school and doing all these things.”

McKeever continued to race in able-bodied competitions, including finishing fourth in an international competition in his hometown, Canmore, in March 2000.

In 2001, legally blind, McKeever joined Canada’s Para-Nordic Cross-Country Ski Team. Since then he has competed in five Paralympic Games with the team, winning 17 medals. In 2017, he was the top visually impaired cross-country skier in the world and received a Meritorious Service Medal from the Governor General of Canada in 2016. 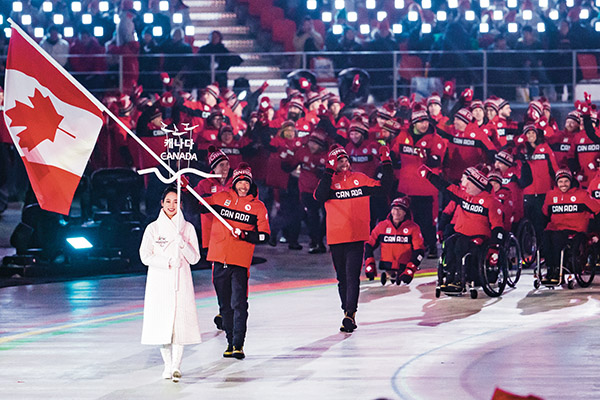 At the Pyeongchang Games, McKeever was the flagbearer for Canada. It was an exciting moment, and the first time McKeever was able to attend the opening ceremonies out of his five games. Usually his races are on the first day of Games, and he opts to rest and prepare for his race, but this time his races were a few days into the Games, so he could enjoy the ceremonies, he explains.

“It was kind of doubly exciting to go to the Olympic ceremonies and have a chance to walk in with the team,” he says. “But then to carry the flag is always a proud moment, and to lead a great group of athletes in was maybe more nerve-racking then even racing.”

Carrying in the flag was a proud moment, says McKeever, and a responsibility he took seriously, representing his country and fellow athletes. But also he hoped there were kids watching, getting excited and sparking a fire to get involved in sports the way he did watching his first Games.

Skiing with Stargardt disease McKeever explains is like having sight in the shape of a donut. He cannot see anything in the middle, it’s just blank, but his peripheral vision is still a hundred per cent. It works for him while skiing, he sees the main track and can ski on his own without a guide, but is faster with one. But the disease is degenerative, and he will continue to lose his sight, McKeever explains, making it harder to keep balance or see the change in snow conditions or ice in the snow.

While competing, McKeever skis with a guide in front of him, who can see the changing snow conditions and choose the best path to travel.

Finding guides can be a challenge, for many reasons, explains McKeever. He needs to find a person he can trust and communicate with easily, but also someone who can keep up with him.

McKeever skied with Erik Carleton for four years, a hard-working skier and friend he competed with early in his career. He also skied with his brother, Robin as a guide. The two skied together at the Vancouver Games in 2010, where they won Canada’s first Paralympic gold on Canadian soil.

“Being able to race with my brother, that brought us closer together, and took us from being six years apart and from the same family and brothers in name, to being brothers for real and best friends,” says McKeever. “So that was a big growing point for us.” 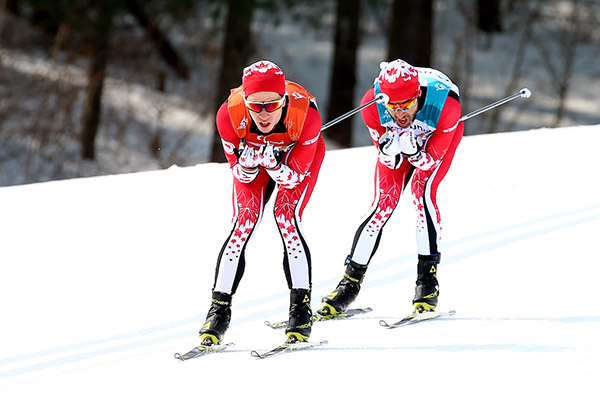 Robin became the Para-Nordic head coach in November 2010, so McKeever starting working with Graham Nishikawa as a guide, skiing together at the Sochi Games in 2014. The two were training partners for several years in the past, so working together brought them close, he says.

“Graham and I have a lot in common, which has been pretty fun, in that he is also half Japanese, so we kind of have that shared experience there and we kind of joke that, both being half Japanese, together we make a full Japanese,” laughs McKeever. “Working together as a guide-athlete team, it tends to bring you really close together, and we kind of feel like we’re brothers, even though we are from different families.”

Both athletes have Japanese Canadian grandparents, but neither speak Japanese, says McKeever. Learning about their Japanese culture together while competing in Japan was an interesting experience that they shared with the rest of their team.

“I’m a proud Canadian, but we are also proud of our Japanese heritage and we don’t always know as much about it as we would like. There’s always this mystery and intrigue that surrounds it, and it’s fun to explore that, and we get the opportunity to travel and do that,” says McKeever. “You share your cultural background with your team and they share theirs with you.”

Reflecting on Pyeongchang, and his new title as Canada’s most decorated Paralympian is something McKeever is very proud of, but not why he competes.

More than medals and titles, what makes McKeever really proud is how long he has been able to compete at this level, despite injuries, time and age. He’s seen his team grow and the Paralympics evolve over the 16 years he’s been a part of them.

“I still enjoy every aspect of my sport,” he says. “That’s what I am proud of. I have kept going because I’ve enjoyed it. It’s about finding love for it, being a student of the sport, those things are really important to keep motivated.”

As well, McKeever hopes his story can reach more people with disabilities, and teach them about options and opportunities to experience high level sports.

“Sport is good physical therapy, good mental therapy,” he says. “To show people that there are these activities that they can do, and they can still lead normal lives with some adaptation, but we can still enjoy getting outdoors and getting involved in physical recreation, I think that’s really important.” 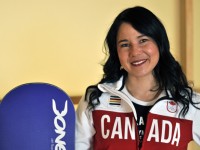 Katie Tsuyuki inspiring the next generation of athletes through the love of sport
April 4, 2014


Thank you for the story on Brian McKeever. We really appreciate it. We were “cheering him on” at the Paralympics and were able to greet him at the Calgary Airport.