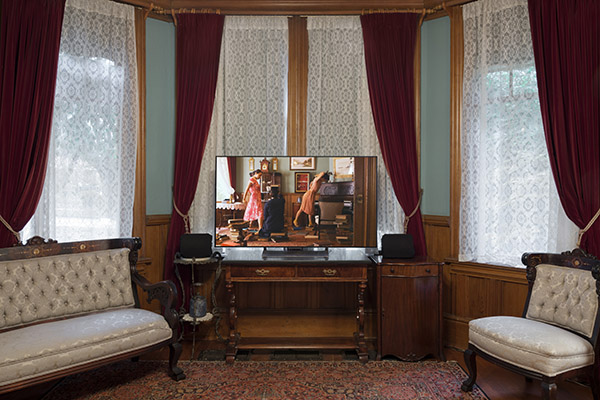 OTTAWA — It is a wonderful moment when a project evolves into something that can be shared with a broad audience.

As the curator and co-curator of two upcoming exhibitions on Japanese Canadian history at the Carleton University Art Gallery (CUAG) in Ottawa, it has been an honour to build meaningful relationships with the Japanese Canadian artists featured, as well as my collaborators within the Ottawa Japanese community.

Inheriting Redress: The Ottawa Japanese Community Association Archive is a community-driven curatorial project developed as a partnership between members of the Ottawa Japanese Community Association (OJCA) and my colleague Rebecca Dolgoy and I at the Centre for Transnational Cultural Analysis (CTCA), a small research centre at Carleton University.

The exhibition is built on a community archive of redress objects collected by the OJCA, telling the story of the Ottawa community’s role during redress. The redress movement during the 1980s marked a significant turning point for the Japanese Canadian community as well as for the nation itself. It was the first time a cultural community successfully advocated for a formal acknowledgment of historic injustice and a large-scale settlement that included both collective and individual payment.

Inheriting Redress builds on that legacy of action, encouraging knowledge about and engagement with its history while pointing to the present, where the campaign’s call for equality and human rights in Canadian society remains an urgent priority. The objects chosen for Inheriting Redress range from artwork, campaign memorabilia, redress documentation, photography to community interviews. 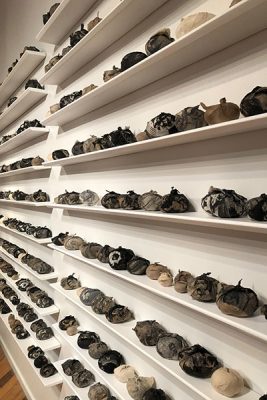 As an art historian, I am excited for the display of two artworks created and sold to fundraise redress efforts: Takao Tanabe’s Spanish Banks and Linda Ohama’s Watari Dori. Also on view are family photographs generously lent by the Takahashi family and archival objects from the “Freedom Day” rally (April 14, 1988) on Parliament Hill such as promotional napkins and press photographs by Gordon King.

Sites of Memory: Legacies of the Japanese Canadian Internment is an art exhibition developed from graduate student research I began in 2016 and features the work of three esteemed Japanese Canadian artists: Norman Takeuchi (Ottawa), Emma Nishimura (Toronto) and Cindy Mochizuki (Vancouver). These artists will likely be recognizable to many: all have been exhibited at the Nikkei National Museum and Cultural Centre in Burnaby and two had artwork exhibited in the Being Japanese Canadian exhibition at the Royal Ontario Museum in Toronto. What links the work of these three artists together is their use of paper, photography and print, and the ways these mediums have historically been used to engage with past memories and experiences.

Emma Nishimura’s Collected Stories and An Archive of Rememory, two ongoing series, memory is visually connected using furoshiki. In Nishimura’s series, the furoshiki act as symbols for the way memories can be both heavy and weightless simultaneously: the bundles and their corresponding etchings carry a metaphor for how we hold and share memories. Each etching is based on an interview with members of the Japanese Canadian community about their experiences and memories of internment. 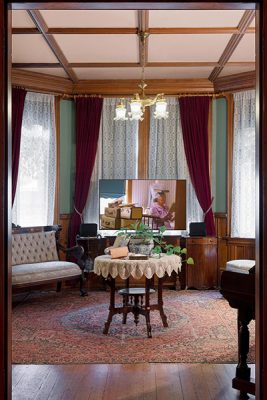 Installation view of Cindy Mochizuki’s Sue Sada Was Here at the Roedde House Museum in Vancouver, BC for the exhibition Memories of the Future III (2018). Photo credit: Rachel Topham Photography.

Commissioned in 2018 by curator Katherine Dennis, Sue Sada Was Here calls upon the memoir writing of Muriel Kitagawa to speak to the larger relationship between print history and Japanese Canadian experience throughout the twentieth century. As each dancer gracefully moves through Vancouver’s Roedde House, they pass, stack and turn the pages of books telling a colonial history, one that often excludes the presence and experiences of Japanese Canadians.

The third installation is Norman Takeuchi’s mixed media series, A Measured Act, which has been hidden away from the public since it was acquired by the Canadian War Museum in 2014. A Measured Act is a series I have engaged with as an art historian for much of my short career.The series, which includes five large-scale paper kimono and six smaller, shelf-mounted conté drawings, highlights internment experience in a way that is both intimate and broad-strokes. Each kimono represents a prominent location during the internment – Angler, Tashme, Lemon Creek, Slocan, and Hastings Park – while the small drawings remind us of the everyday objects that families would take with them during their dispossession.

A Measured Act is striking in the way it bridges official accounts of internment through iconic photographs and posters of the time with the artist’s personal memories of that experience as a child.

The two exhibitions are woven together to create a larger continuity, but they tell different stories: Sites of Memory reflects on the history of internment through work by contemporary artists of different generations while Inheriting Redress highlights the redress movement as a defining moment in Canadian history and offers a glimpse into the importance of building community archives for future generations.

What I hope both of these exhibitions make clear to a larger public audience is that Japanese Canadian experience is also not contained to and defined by these past events, but instead is dynamic and ever-changing, sustained by an interest in human rights and social justice.

Sites of Memory: Legacies of the Japanese Canadian Internment and Inheriting Redress: The Ottawa Japanese Community Association Archive will be on view from Sept. 15 to Jan. 26, 2020 on the mezzanine level of the Carleton University Art Gallery.

The Carleton University Art Gallery is located in the St. Patrick’s Building on the north end of campus at 1125 Colonel By Dr. The gallery is open Tuesday to Sunday from 11 a.m. to 5 p.m., and is an accessible, barrier-free space.

Everyone is welcome and encouraged to attend the gallery’s official opening of these two exhibitions, on Sept. 15 from 2 p.m. to 4:30 p.m. A special performance by Oto-Wa Taiko and Bear Nation Drummers will take place. The event is free and open to the public and light refreshments will be served.