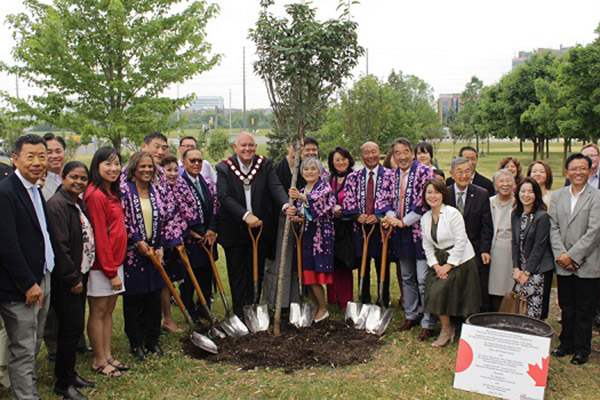 MARKHAM — On a rainy afternoon, perfect weather for planting trees, a ceremony commemorating the planting of 80 sakura trees in the city of Markham was held at the Markham Civic Centre on June 23.

A total of 80 trees were planted to commemorate the 90th anniversary of diplomatic relations between Japan and Canada. The trees are meant to symbolize the friendship between the two countries. 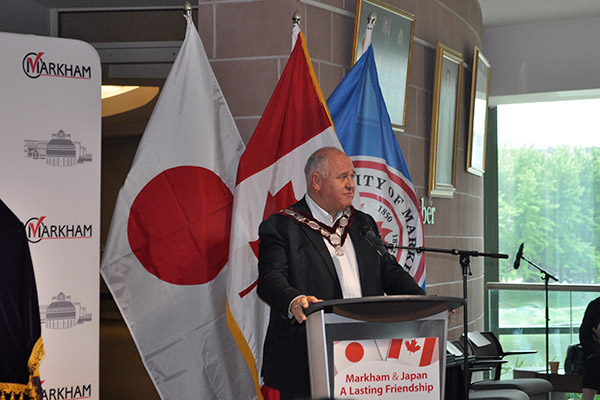 “The trees represent the desire of all people involved, that the fruitful friendship between Japan and Canada is always remembered here in Markham, one of the most diverse cities in all of Canada,” said Consul-General of Japan Takako Ito at the ceremony.

“So many diverse nationalities are living peacefully together in our multicultural society, like the city of Markham, planting sakura trees is the ideal environmental gesture, we must cultivate as a symbol of love and peace instead of planting hate and anger into the people’s minds—it is sad and awful,” said James Matsumoto, who has helped plant 3,000 trees over Ontario with the Japanese government’s sakura project. 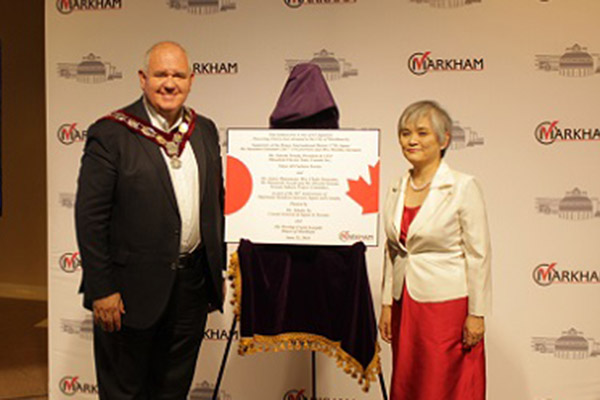 Three specific locations in the city were carefully chosen for the trees, said Markham Mayor Frank Scarpitti. These locations are: the Markham Civic Centre, where the ceremony took place, Rougeside Promenade, a street in the heart of Markham and the Milne Dam Conservation Park, where the city holds its Canada Day celebrations every year.

“The explosion of pale pink petals, it truly is a sight to behold and we are thrilled that the residents and visitors to Markham and the GTA and beyond can now appreciate the splendor of the Japanese sakura trees right here in Markham,” said Scarpitti. 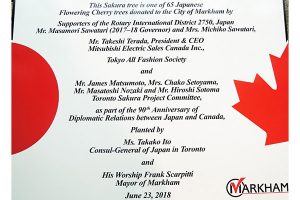 A closer look at the commemorative signage. Photo credit: Consulate General of Japan.

Markham has taken part in a ‘Trees for Tomorrow,’ project, planting 389,000 trees in the city, more than one tree per every Markham resident, says Scarpitti. The sakura will become a way for Markham citizens to better understand and appreciate Japan and foster friendship between the two, he said. Talks to plant trees in Markham began after Scarpitti led the Markham delegation on a business trip to Japan last year with former Ontario Premiere Kathleen Wynne.

Markham is home to 25 different Japanese companies, including Mitsubishi, Canon, Toshiba and Shiseido. The companies employee over 3,400 people in Markham, said Scarpitti.

“So the next time you come across the sakura trees, whether it’s here or in any other part of the world, seize the day, revel in a sense of wonder and remember life’s beauty, it is fragile,” said Scarpitti.

“[Reflect on] relationships that make us stronger, relationships and friendships like the one between the city of Markham and Japan.”