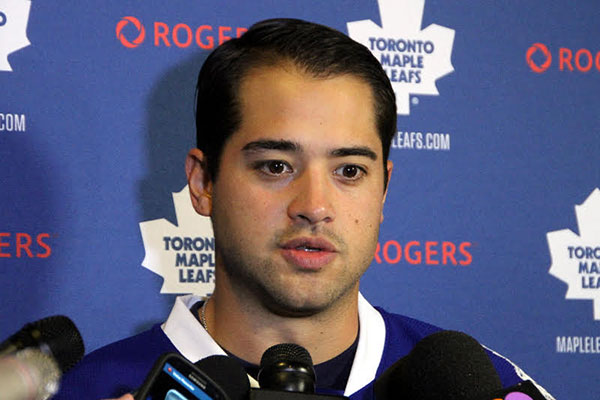 Devin Setoguchi at a press conference before the tryouts for the Maple Leafs. Photo by: Jonathan Eto

SWEDEN – Former San Jose Sharks player Devin Setoguchi, 28, has signed with HC Davos of Switzerland’s National League, according to a report from the team.

In late September, Setoguchi was invited to try outs for the Toronto Maple Leafs, but he didn’t make the team. Disappointed with the results, he began looking elsewhere for opportunities in professional-level hockey.

According to this report, Setoguchi signed with HC Davos largely because of former teammate Joe Thornton’s experiences with the league.

Thornton played two seasons with the team during the last two NHL lockouts in 2004 and 2012, and the two players have long been compared to one another. He’s still one of the Sharks best players, so perhaps Setoguchi could learn something new by playing with the NLA.

In an interview featured in Nikkei Voice’s October Issue, Setoguchi also considered playing in Japan. but it looks like he will be heading to Switzerland.

Setoguchi has played with the San Jose Sharks, Minnesota Wild, Winnipeg Jets, and the Calgary Flames garnering over 249 career points in 471 games in the NHL.

But over the years, his performance has been on the decline.

His point scoring plummeted to only 11 with the Jets in the 2013-14 season and no points in 12 games with Calgary before he was released by the team.

After last season, Setoguchi also went into rehabilitation for a drinking problem, but after a strong off-season he’s back in prime physical condition.

Now he could be joining one of Switzerland’s biggest clubs. HC Davos has won 31 NLA titles and is the league’s reigning champion.