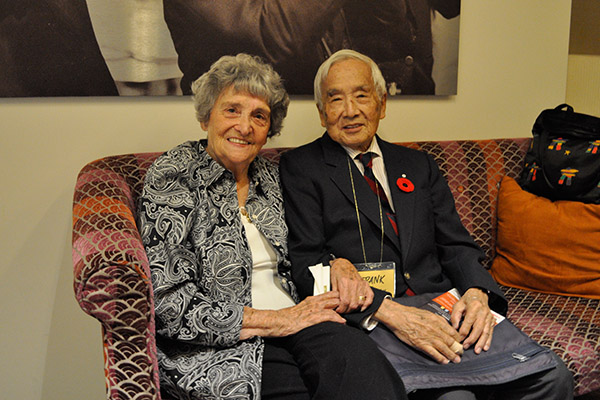 As you know, Sept. 22, 2018 was the actual 30th anniversary of the signing of the historic redress settlement, the Japanese-Canadian triumph over the Canadian government’s wartime mistakes.

The event was called the Redress Anniversary Gala, hosted by the Toronto Chapter of the NAJC, held at the famous TIFF Bell Lightbox. This downtown theatre is best known as the site of the annual Toronto International Film Festival.

What is not as known is that Sansei architect Bruce Kuwabara was the lead designer of Lightbox. He is also one of the founders of KPMB Architects, who in the 1980s designed the second and current Japanese Canadian Cultural Centre in Toronto. The original JCCC, a few blocks away in the same Don Mills area was one of famed Nisei architect Raymond Moriyama’s early successes.

Kuwabara was one of the lead sponsors of the gala, alongside Raymond and Sachi Moriyama. There were several other sponsors and donors for the gala, which demonstrates the impressive efforts the gala committee put into this celebration.

I’m told that the turnout at the Lightbox was between 250 to 260 persons—most of whom paid $100 each. The majority were Sansei, plus some Yonsei, and a sprinkling of surviving Nisei. Naturally there were others who were either related or close to Toronto and Hamilton Japanese Canadians.

The main program featured talks about the successful redress campaign by Art Miki, the leader of the redress strategy committee, and Justice Maryka Omatsu, one of the eager young postwar lawyers back then and a key member of the same committee. Then-president of the NAJC Miki had come from Winnipeg to be part of the gala. MCing the night was Sansei Lynn Deutscher Kobayashi, a Toronto NAJC board member, assisted by Bruce Tatemichi, the local chapter president also a Sansei. 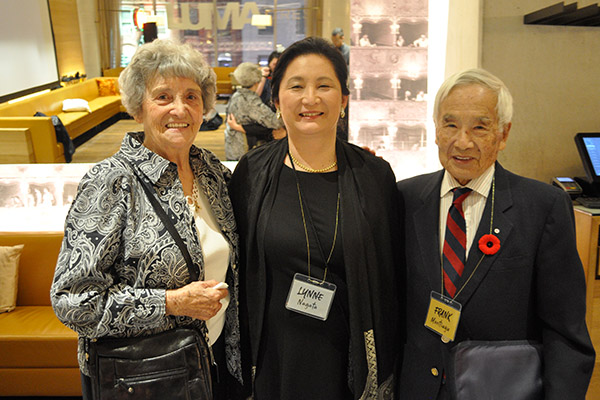 The evening was a chance to socialize with redress leaders, Japanese Canadians who had been also active in the campaign and were profiled in the gala’s brochure. They were lawyer Shin Imai, artist Bryce Kanbara from Hamilton, Bill Kobayashi who had been the Toronto NAJC president in the 1980s, author Joy Kogawa and myself.

My involvement began when local redress campaigners formed the Sodan-Kai to inform Toronto-area community members about the redress campaign. In my case, along with writing for the campaign newsletters, I was asked to MC information meetings. As mentioned in my October column, when the audience began to include some Issei who didn’t understand English easily, my Sodan-Kai co-chair was Imai. Born in Japan, Imai came to Canada when he was a teenager, with his parents.

Prior to the gala, I had asked if we redress leaders were to speak as well. But Deutscher Kobayashi gala chair explained, “The idea is to minimize speeches and give folks lots of time to chat. You can relax, you don’t have to speak and I hope you enjoy catching up with lots of people.”

Happily following Lynn’s suggestions, like others present, Betty and I greeted relatives and friends we see often as well as catching up with those long-time friends we hadn’t seen for a while. Friends such as the Moriyamas, Terry Watada and Don Niiya from Montreal who had also been a strong judoka. We met Patricia Hirasawa Simpson, the president of the Hamilton NAJC chapter, which was also involved in this celebration.

One good example of the talent possessed by the young people who organized the event was the gala program booklet. The impressive booklet, its cover photo is an effective variation of the historic Sept 22, 1988 moment when Art Miki was signing the redress settlement in Ottawa with then-Prime Minister Brian Mulroney, while Roger Obata and Maryka Omatsu looked on. 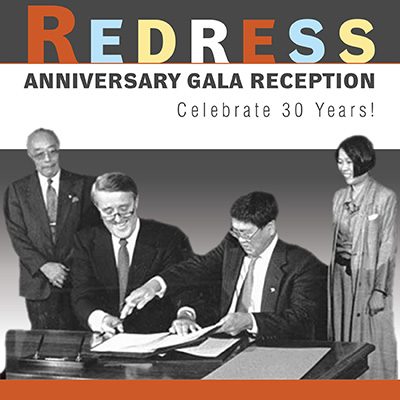 Along with the gala program details, the 35 pages included photos and text descriptions of the key folks involved. Along with the two main speakers and the leadership guests, there were tributes to the late Roger Obata, who had been a longtime Japanese Canadian leader and Second World War veteran, strong redress supporter journalist Ben Fiber and federal NDP politician Andrew Brewin. Other profiles included lists of accomplishments by architects Kuwabara and Moriyama. Plus lists of various supporters during those years when Japanese Canadians were mistreated by the country during Second World War and afterwards.

The list of non-Japanese Canadian persons who supported our cause totalled 351. Among them were deservedly famous fellow Canadians Pierre Berton, Robert Fulford, June Callwood, Adrienne Clarkson, Austin Clarke, and Mary Jo Leddy, plus 11 rabbis, four city mayors and 12 MPs. Those supporters demonstrate how sound and convincing our redress campaign was. And how decent and fair-minded so many interested Canadians were.

And on a latter page of the booklet, we are told that current Toronto NAJC Board member Lynn Deutscher Kobayashi not only was the gala chair but also edited this memorable book which was handsomely designed by Yonsei Derek Sakauye.

In all, it’s a precious item to keep forever and glance at from time to time. Even without it, I’m sure Betty and I will never forget how different and impressive Toronto’s redress anniversary gala was. The younger people who created this great event have planted its 30th year origins in our proud minds forever.

Thank you so much.


That’s so sweet! Happy to be a citizen of such an amazing city – Toronto – you rock!