Frankly Speaking: Racism is back again – did it ever really go? 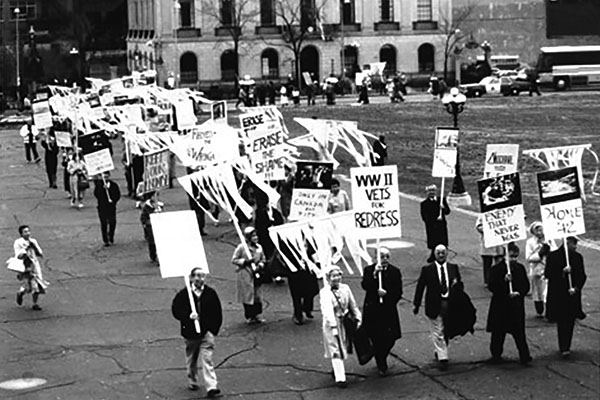 
Recent events raise questions of rising racism in Canada. It has been nearly 30 years since the Redress settlement was signed in Sept. 1988. Photo courtesy Archives of Canada.

Some time ago, when interviewed about the racist years that Japanese Canadians had undergone, I said it could happen again. Not to us, but to another minority in Canada who could be torn apart.

And here we are seeing the ugly word “racism” in newspaper headlines so often again. A recent Toronto example: the York Region School Board trustee, Nancy Elgie, a veteran politician in her 80s. Elgie finally resigned after using the ‘n word’ when referring to a parent who is black in a board discussion.

Another recent incident occurred in Willowdale, a community in North York where my wife, Betty, and I lived until three years ago. A few weeks ago, in a condo building near Yonge Street, Jewish residents found signs on their doors with anti-Semitic messages such as, “no Jews” accompanied by swastikas. And Mezuzah religious scrolls the owners had proudly mounted on their doors vandalized or stolen.

Where did such racism come from? The best clue is to look at the new U.S. president’s personal attitudes, which the Great North is not immune to.

And do these ugly happenings mean we Japanese Canadians might become targets again? It’s been less than 30 years since the Canadian government  signed the Redress settlement in 1988 over the mistreatment of  Japanese Canadians during the Second World War. That unique settlement included an official apology and individual compensation of $21,000 to all survivors.

In that same year, the Japanese Americans who were also uprooted from their Pacific Coast homes and sent to inland internment camps, received a similar official apology plus $20,000 individual compensation.

But President Trump’s knowledge of history seems obviously weak, for he has also claimed that the mistreatment of Japanese Americans during the Second World War was justified despite the subsequent redress which he doesn’t seem to know about.

In Canada, such ignorance at the political level hasn’t taken over yet. But Kellie Leitch, who is campaigning as Conservative Party leader candidate, has expressed the need for would-be immigrants to our country to be judged on their awareness of “Canadian values.” She hasn’t explained what the “values” are but a fair assumption seems to emphasize immigrants being white.

This Canadian-born nisei knows that like most newcomers, his immigrant parents brought their cultural values with them when they arrived here. As they decided they would be staying in Canada, they began to acquire Canadian customs that their children were learning growing up. All while saving appropriate Japanese touches for their cultural selves as they qualified for Canadian citizenship.

As it happens, to combat the racist attitudes promoted by some American and Canadian politicians, the Toronto Star in its Sat., Feb. 18 issue included a Washington Post article about Japanese-American Fred Korematsu’s ordeals because “being an American citizen” he refused to obey the government order to leave his California home and go to an inland internment camp.

The Star’s headline: The man who fought back. And the subhead said, “Seventy-five years ago, Japanese-Americans were locked up en masse as a war risk. Is history repeating itself under Donald Trump?”

The connection the Post article with what is happening now is explained by an early paragraph:

“Korematsu had gone to court to fight it, much as others now oppose President Donald Trump’s executive order barring people from seven Muslim-majority countries from entering the United States.’”

The executive order that President Trump signed states that any person from any of those seven Muslim-majority countries would not be allowed to travel to the U.S. – not because of anything they might have done but simply because of their race and religion.

Fred Korematsu’s story details the court cases and the detention he suffered. It wasn’t until he had turned 63 that he was ruled no longer guilty.

And to quote the Post article, “In the remaining years of his life, until his death at age 86, Korematsu would hear apologies from U.S. presidents, he would receive the Presidential Medal of Freedom from Bill Clinton.”

Then the Post writer says Korematsu’s daughter Karen “hears echoes of her father’s old warnings in the way President Trump’s order casts suspicion on an entire class of people, and the way it is defended in court without citing any evidence against the people the order affects.”

The Star and The Globe and Mail are among the Canadian papers showing concerned about the new American president’s ways of thinking and judgment. As are the Washington Post and the New York Times.

To read the Korematsu article, visit the Washington Post website. The article originally appeared in the Feb. 12, 2017 issue.