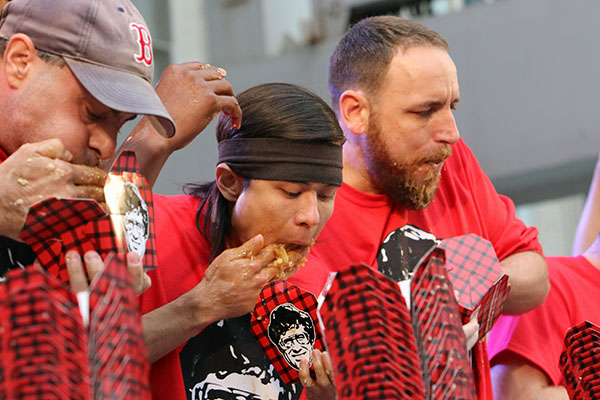 While some people think that eating competitions are something people only do in bars or are somewhat of a sideshow spectacle at a fair, let it be known that there are people who take it very seriously.

Major League Eating (MLE) is the world body that oversees and sanctions all professional eating contests and rank their competitors like the PGA would their golfers, or the WTA would rate their tennis players. Most MLE competitions are co-ed, so the rankings are co-ed as well.

The MLE was founded in 1997 as the International Federation of Competitive Eating Inc. and has since evolved into a global sport that can attract up to 2.8 million viewers on ESPN2, like it did for Nathan’s Famous fourth of July Hot Dog Eating Contest in 2014.

Interestingly, Japanese competitors were quick to dominate the sport, winning every Nathan’s Famous fourth of July competition from 1997 to 2006 with the exception of 1999, when Steven Keiner from the U.S., took home the top prize.

In a landmark contest in 2001, the previous hot dog eating record of 25 and an eighth hot dogs set by Kazutoyo Arai was shattered by almost twice as many, by Takeru “The Tsunami” Kobayashi who ate 50 in 12 minutes. He was only 5’ 8” and 128 lbs. This astounding feat propelled eating competitions in popularity and led to several outrageous contests, many of which can be seen on YouTube, from a gyoza eating contest in Los Angeles to an kale salad eating contest in Buffalo. If you’re so inclined, you can find videos of Kobayashi going head to head with a giant bear, and winning the Glutton Bowl, a two hour, three round competition by eating 10 pounds of cow brains in the finals.

Total prize purses are often under $5,000 but have increased to be as large as $17,500 for Hooter’s chicken wings competition and $40,000 for Nathan’s Famous Hot Dog Eating Contest. Canada has it’s own competition as well, a poutine eating contest, which took place in Toronto on Oct. 1, sponsored by Smokes’ Poutinerie. 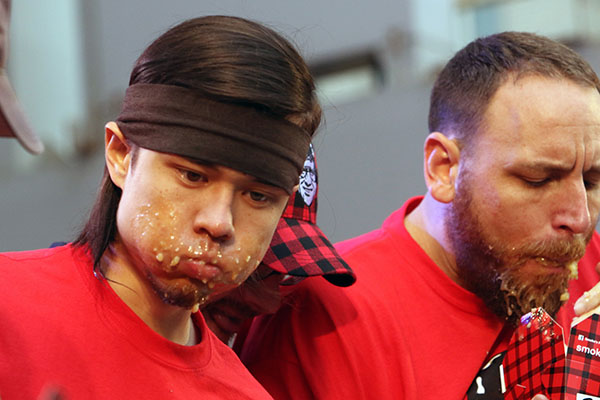 Miki Sudo, a 30-year-old, weighing only 128 pounds, is the highest ever ranked female competitor in MLE. Born in New York, she moved with her family to Japan at age five for seven years before returning to the U.S. At the age of eight she placed second in a national sumo competition in Japan. Another quirky talent of hers was to race unicycles.

Sudo won the Nathan’s Famous Hot Dog Eating Competitions – female category in 2014 and 2015. Unfortunately she did not make the trip to Toronto for the poutine competition.

Ranked second in the MLE is Matt Stonie, born in San Francisco, is only 24 years old and is the youngest competitor in MLE. He stands 5’ 8” and 130 pounds soaking wet.

Stonie says he came across competitive eating by fluke. While in college, working at a $7 an hour job, he came across a lobster roll eating competition five minutes from his home. He joined and won the $1000 top prize. There he realized he had a natural talent for speed eating and decided to put school on hold to pursue it as a career. Stonie works out five days a week and trains at home eating.

Stonie has also done well marketing himself and creating a fanbase, with almost 2.1 million subscribers on his YouTube channel In addition to posting MLE footage, he films an interesting ’60 Second Series’ where he takes suggestions from his subscribers and eats as many as he can in a minute.

Matt says he considers his proudest MLE moment when he dethroned the #1 ranked Joey “Jaws” Chestnut to win Nathan’s in 2015. 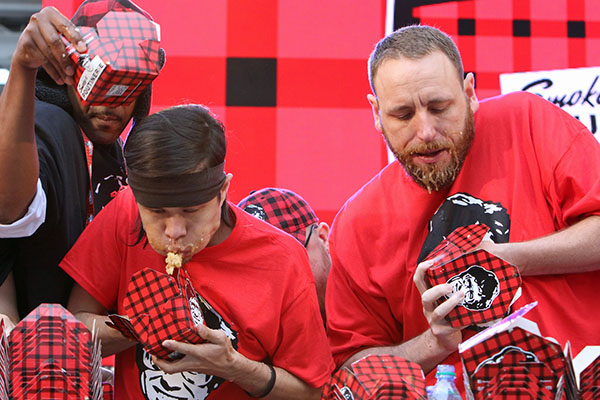 On Oct. 1, Stonie was the two-time defending champion at Smoke’s Poutinerie World Poutine Eating Competition. It is the largest MLE competition in Canada, second largest in the world and one of the globe’s premier display of gastronomic gamesmanship.

Finally as competitors were introduced one by one, the crowd could see the type of adversity Stonie would have to overcome. With challengers as tall as 6’ 9” and another over 400 pounds, it seemed unfathomable that the slight Matt Stonie would stand a chance. But when his name was called, the crowd erupted with cheers. He was definitely the fan favourite.

At the end of the competition, Stonie surpassed his previous year’s total by half box for a total of 46.5 boxes of poutine.

However, Chestnut had his eye on the prize and finished with a new record of 51 boxes, taking home the $6,000 prize. Stonie came in third, after Carmen Cincotti, who ate 25 pounds of poutine. The event was also raising money for We Care, a charity that supports the needs of disabled children going to camp. Over $50,000 was donated.

Stonie did not seem disappointed with his performance and could be seen after the competition greeted by adoring fans and his family.